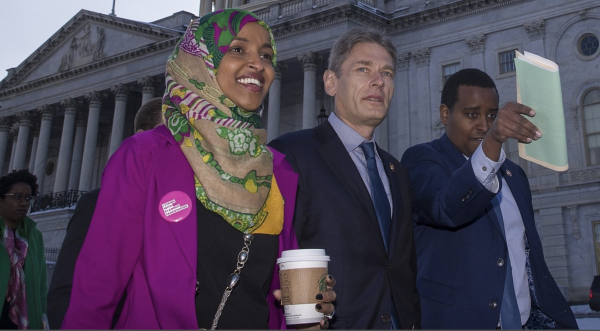 The far-left members of the squad are now scrambling to condemn the recent rash of anti-semitic violence sweeping America in the wake of the recent conflict between Israel and Hamas.

However, many are now pointing out that the group’s own history of anti-semitic and and Israel rhetoric likely contributed to the violence.

Progressive “Squad” Democrats in the House of Representatives in recent days condemned anti-Semitic attacks in the United States as they also assailed Israel as an alleged “Apartheid” state that is killing children – comments some have said are creating an excuse for pro-Palestinian radicals to violently attack Jews.

“Horrific and unacceptable,” Omar said of an attack at a Los Angeles sushi restaurant. “Nobody should face threats and harassment based on their religion or ethnicity.”

But other members of the small informal caucus issued statements that were more equivocal, mentioning ant-Semitism alongside Islamophobia or couching statements against anti-Semitism with critiques against Israel.

It's so INTERESTING that her anti-Israel tweets that incite antisemitism come from @AOC (more than 12 million followers), while her tweets telling people not to be antisemitic come from @RepAOC (with less than 700k followers). https://t.co/WL8zLiZASL

Will the squad ever be held accountable for its long history of stoking the fires of antisemitism? Let us know what you think in the comments below.

Is this all we’re going to hear about for the NEXT 6 million years?

THE SQUAD IS ANTI-AMERICAN AND SHOULD BE REMOVED OUT OF CONGRESS AND SENT TO PRISON FOR HIGH TREASION AND TERRORISM. USMC

I agree with you Don

YEs, they are murderers and terrorists. They must be deported with their clans out of the US.And never come back otherwise they will be sentenced to death

I agree but I think hanging would be more appropriate, that is of course, after the investigation, trial and how they wouldn’t be found guilty, well ytou make up your mind

No… Give them a choice, either gitmo or they can go to wherever their grandparents came from…

No they won’t as long as the EVIL Democrats are in power. They want to control the world but if they would actually read the Word of God they would realize that they never will.

sins of omission. The Republicans are complicit in the anti Semitic rant by the Democrats. They are as much a disgrace as the Democrats.

I agree as this is the biggest “dog and pony show” the world has ever seen.