McCarthy Backs Vote to Keep Liz Cheney in House Leadership Role, Even After her Vote to Impeach Trump 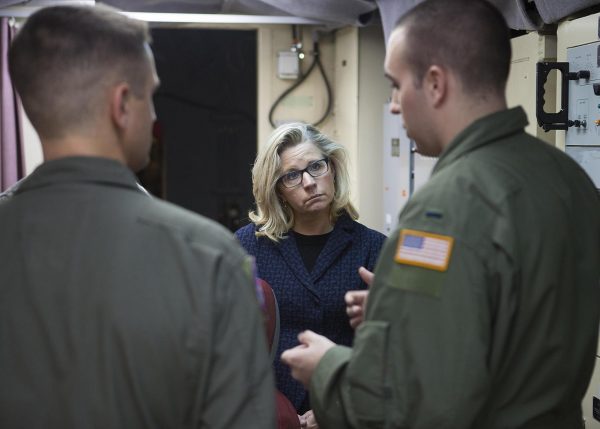 Rep. Liz Cheney survived an attempted vote to remove her from GOP leadership in the House of Representatives Wednesday night, in spite of a major push by many pro-Trump Republicans to remove her.


The vote was conducted by secret ballot, meaning GOP house member were able to cast their vote without the threat of blowback from voters.

In a secret ballot vote by the entire House Republican Conference, only 61 members voted to strip Cheney of her leadership role, with 145 supporting her.

On the eve of the impeachment vote, the three-term congresswoman from Wyoming said that Trump “summoned this mob, assembled the mob, and lit the flame of this attack.” She stressed that “there has never been a greater betrayal by a President of the United States of his office and his oath to the Constitution.”

Cheney was reportedly asked whether she regretted her vote to impeach President Trump, she responded with a confident ‘no.’

The most shocking part of it all was that allegedly pro-Trump House Minority Leader Kevin McCarthy backed keeping Cheney in her leadership positions, in spite of her vote against Trump.

House GOP leader Kevin McCarthy, who had given Cheney tepid support in recent days, spelled out at the meeting that he supported keeping Cheney in her leadership position.

According to multiple sources, McCarthy urged House Republicans to move past Cheney’s impeachment vote and stay united in order to take back the House majority in the 2022 midterm elections.

Well, McCarthy kind of clarified that he wanted to keep the Republican majority and I respect that reasoning to keep Liz Cheney. Also it’s always good to stay on the good and positive side of things. I don’t purport being like the leftists and thinking we should just throw out and kill everyone that doesn’t think like we do.
Besides, probably the voters should have the last word on it.

Excuse me, it wasn’t “leftists” who attacked the Capitol on January 6

Excuse me, they were there enticing violence. One of your BLM/Antifa buddy’s will be going to prison for his violence..AND there were more of you wolves there made up as Trump fans to make the Trump crowd look bad. Yes there were some bad conservative apples in the crowd but not as many as the left wing commies make their tribute to violence just as they are doing in Washington etc.

They were bussed in !!

We will never no if it is was leftists or a combination of Trump supporters. Actually we will never know what really happened that day!
Of course if you only listen to CNN or MSNBC what they don’t know they make up!!!

media reported nearly a million showed up for the ‘Stop the Steal’ rally, yet how many invaded congress? A couple hundred?

Just watch the entire Video. Military have the Video including voices. One of them was a woman well known on CNN who said “We did it!

You don’t know that , it has yet to be determined .

James I corcoran
Reply to  Jim

like counting votes….after an interminable delay and cooking the books

Then why were Antifa members and their associates prominently captured on film?

The reports I’ve seen show more Lefties participating in the violence than anyone else. Think Peaceful Protests whenever you look at Portland , Detroit, Chicago, Seattle then try to label the Capitol event as violent. Who has the right and who do not?

If you read the letter the mayor wrote warning about the rally she said she got a call or letter from the leader saying that the antifa would be there not dressed in black but like everyone else so that they fit in and they are talking it blm about a way to get in the door maybe from the back of the building. I read that litter about a week before it happen .

If there was such a letter that claimed antifa would be there not dressed in black so they would fit in, why wasn’t this made public immediately rather than having Trump falsely﻿ accused?

Because media lie! Their CCP Bosses order them to demonize President Trump and play up the dramas to make him look bad.

Oh yes it was and their is solid proof, they got the crowd all riled up while Trump was talking to supporters, demonrat PILLOUSER and schmucker are dog meat!

Some BLM and antifa members have in fact been arrested in regards to january 6th. And you dont seriously think a TRUMP supporter would leave a bomb at REPUBLICAN headquarters, do you???? But it was in fact leftists who were rioting in DC only a few months before, burned a church across the street from the White house, and then refused to observe the curfew so that troops had to be called. But somehow that was NOT an insurrection???? Why, I even recall the DEMs made fun of Trump when he wand his family were moved to a secure room. Buts it’s all different when THEY feel threatened, huh?? Yeah, when the left burns down stuff its just “calling attention to an injustice”. Pelosi was correct when she said the January 6th rioters would have been treated differently if they were black. They would not have been arrested at all. Or, if arrested, I guess would have taken advantage of Kamala Harris’s fund to bail out rioters. Hey Kamala, where is that bail cash for the January 6th peaceful protesters?? Wake up to the double standard, honey.

Don’t be an idiot. Before you comment, study what actually happened. The girl who was killed was murdered on camera, the sacrificial lamb. I saw it; did you? Did you see the security officers inviting the protesters in? It was on camera. Did you see someone handing baseball bats out of a basement window to the protesters? Yes, that was also on camera. Did you see security leading protesters up the stairs? On camera,
This was a set-up by anti-Trumpers to deny him a fair chance to prove the massive fraud.

One more point. Who benefited from that incursion? It was the traitorous left. It was a set-up.

Oh but it was a bunch ofLefty Loons!

But that was exactly what it was LEFTISTS and Trump haters, and both kevin and liz have shown their colors no matter what kevein try to say..

What is the evidence that the Jan 6 Capital protesters wanted to harm the Congress? They were protesting our gov denying us all a free election—which this one wasn’t by a long shot. Once the SC wouldn’t hear the Texas case, I knew America is over as we used to know it. Leftists have won….

Oh yes it was! Antifa and BLM made up as Trump supporters except their caps were worn back to front. Its all on camera

What good is a Republican majority if all Republicans are not of the same ideology?

The Republican Party is dead. They just don’t yet know it. MAGA has moved to the New Patriot Party, along with at least 50% of Republicans and 20% of Democrats.

No New Patriot Party, as yet!

I’m with you 100%. He can’t afford to lose 1 republican. I don’t think he really cares what she says, as long as she keeps her place in Congress. We’re already screwed.

They were removing her from her position as the 3rd ranking repub. They were not going to remove her from office. BIG DIFFERENCE. The dims are demanding Cruz step down/resign and Greene,
for DISMISSAL! Unlike the sell out RINO’S the dims will band TOGETHER not split and vote opposite!

That’s right! Be the wimpy GOP its always been just to get pats on the back from those who don’t give a hoot about you. This is the same way it’s been thru history since the turn of the 1900s. Vote both of them out, and get a party that represents the people. Who made either of them king and queen? The fact the vote was secrete shows they do not want the voters to know.

Who would believe that Big Brother from 1984 is alive and well in the USA government?

And we are all becoming Winston Smith.