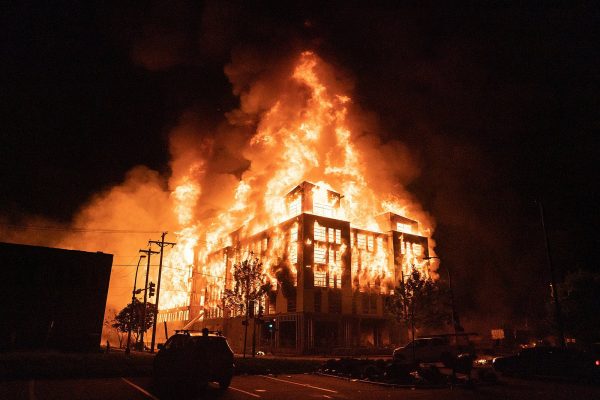 Protests have spiraled out of control in several large cities across America in the wake of the death of George Floyd.

Watching the news often gives the impression that American is at a low ebb. While we’ve faced worst trials in the past, the convergence of a deadly pandemic, economic suffering inflicted by surreal lockdowns, and the continued presence of police brutality combined in news coverage today can leave even the most level-headed media connoisseur despondent.


But it’s our job to bring the news to you. Raw and unfiltered, so you can see firsthand what’s happening on the ground. Besides the chaotic footage, there are slivers of hope as well, from peaceful protesters standing up to Antifa thugs to local police in Flint, Michigan marching hand-in-hand with those protesting.

Here’s the rest of the story the media isn’t reporting!

Fox News’ Leland Vittert was reporting from Lafayette Park outside the White House at 1:00 am Saturday when rioters pounced. While Vittert expected unrest, even violence, he confided to host Neil Cavuto that this was something else. A crowd Vittert estimated at “50 or 60” turned on him and his Fox News crew in a manner he described as “organized.”

Vittert admitted the last time he felt a comparable level of fear occurred when members of the Muslim Brotherhood chased him out of Cairo’s Tahrir Square.

A man in Salt Lake City couldn’t hide his frustration with rioters who had deviated away from the protest over the inhumane death of George Floyd in more ways than one. We can only assume from the footage available to us that the individual wanted to scare the mob as he never fired an arrow.

A large group, mostly young men, descend on his position in seconds, hurling epithets before flailing on him with their fists, legs, and even skateboards.

After someone embedded in a large crowd fired a gunshot at national guardsmen and police officers attempting to enforce curfew in Lousiville, soldiers and police returned fire.

It is unclear who fired the fatal shot, but one bullet hit and killed David McAtee. McAtee ran a small barbecue restaurant next to the chaotic scene. He was known for giving free meals to uniformed police officers.

Kentucky Governor Andy Beshear (D) is calling for the Lousiville Metro Police Department to release any video of the shooting in its possession.

“These Cops Love You”

Michigan Sheriff Chris Swanson removed his riot gear, cast aside his weapon, and walked with protesters in Flint on Saturday.

“The only reason we’re here is to make sure you have a voice, that’s it,” Swanson told the peaceful demonstrators before adding that he didn’t condone what happened to Floyd. Sensing an opening, the protesters called on the sheriff to march with them. While riots have rattled cities as diverse as Minneapolis, New York, and Washington, D.C., Flint has experienced no arrests, no fires, and no casualties from its protests so far.

In a subsequent interview with NBC News, Swanson was remarkably candid, telling reporter Scott Stump, “Create the conversation that makes the change. Everybody talks about change — change comes with action. I gotta believe that there’s folks in those communities that want peace and want action. … There has to be a first move, there has to be a first step, and that has to come from both sides.”

Protesters Use Their Bodies to Defend Target

Looting has decimated entire neighborhoods in major metropolitan areas. Its impact is far more insidious than many realize. One night’s worth of damage to a string of storefronts could have a lingering effect for decades. And when developers and their money finally return, it could very well be with the intention to gentrify.

That’s why we have to give kudos to these protest organizers who used their bodies to blockade the entrance to a Brooklyn Target so that those who wished harm couldn’t trash it.

Some protestors in Brooklyn calling to loot the Target, but organizers are rushing in front of the store to stop them, keep things non-violent #nycprotest pic.twitter.com/6x70cpcjep

A Dallas shop owner, perhaps shortsightedly, charged at rioters hurling rocks with only a sword, only to be swarmed by a larger group who beat him mercilessly.

The small business owner’s body crumpled and then contorted under the weight of their combined assault before the mob left him for dead.

Looters ran at him, then he charged rioters

I called an Ambulance and it’s on the way pic.twitter.com/kFxl3kjsBC

A handful of good samaritans stayed with the man, and when paramedics arrived, he still clung to life.

St. Johns Church, across from the White House, is building of historical and cultural significance in Washington, D.C. Its cornerstone was laid one year after the British Army torched our nation’s capital, and every president, from James Madison on, has at least attended a service there.

Yet a fire ignited by protesters determined to go beyond their First Amendment rights threatened the building, which for decades has remained on the National Register of Historic Places.

D.C.’s finest may have saved the historic landmark, but it did not escape unscathed. Nor did the Lincoln Memorial, which was defaced according to White House Press Secretary Kayleigh McEnany.

People debating whether St. John’s on fire but Fox News report sure seemed to show it is or was. pic.twitter.com/jUQGqFfGBT

NEW: Fire was in basement of St. Johns, and is out, my @washingtonpost colleague @phscoop reports from DC fire department. Firefighters got there w/ a police escort and quickly put out the blaze. Did NOT appear to cause any significant damage, and it is unclear how it started.

Minneapolis has and remains the epicenter for the anger and unfortunate violence that has arisen out of George Floyd’s tragic death. I say it’s unfortunate on multiple levels, because of its immediate impact on the community and individuals living there but also because it inevitably takes away from the death of George Floyd, which was alarming enough for a police officer to be charged with murder. The argument that police too easily resort to tactics that are too confrontational and dangerous is valid. Rioting and violence distract from that message. Of course, no single individual or group has a monopoly on violence.

In Minneapolis, a truck driver drove his semi headfirst into thousands of peaceful protesters blocking traffic on I-35. No one was miraculously hit, but when the tractor-trailer had to slow down to avoid a collision, a group of bystanders honed in en masse.

Peaceful protesters in Washington, D.C. went out of their way to tackle an agitator (possibly Antifa affiliated) who had brazenly dolled out chunks of concrete to (presumably) pelt law enforcement. The protesters swiftly handed him over to the authorities.

Peaceful protesters in DC tackle an Antifa rioter and hand him over to the police for trying to turn things violent. He was smashing the pavement so people could have objects to throw at the police. pic.twitter.com/WoNIkH0GM8

While Leland Vittert probably got the worst treatment of any reporter by rioters, CNN wasn’t immune from their wrath, despite their on-air talent always portraying themselves as woke.

A precariously thin phalanx of Atlanta Police officers kept agitated protesters from storming CNN network headquarters. Reporting at the scene, correspondent Nick Valencia described being hit by a pellet gun and witnessing an officer being carried away.

A sizeable crowd swarmed two NYPD SUVs, members of whom throw different projectiles at the police, although they did not appear to damage the vehicles.

Unlike other stories out of the Big Apple where police cruisers were destroyed, the cops decided they had enough and controversially pushed forwarded.

While he wished the officers had not driven into the crowd, de Blasio said he “understood they didn’t start the situation,” which he said was “started by a group of protesters converging on a police vehicle.”

Eventually, political pressure from the left got to de Blasio, who made it clear the following day that he didn’t like what he saw one bit in the now-viral video and that an independent review of the footage was underway.

The effects of rioting last long after the media coverage subsides. While the damage to property and the economy is immediately apparent, they also provide a clear disincentive for business owners to relocate operations to riot prone areas. That affects employment. Riots are disastrous for property values, too. It took parts of Washington, D.C. over four decades to recover from the riots in 1968. Hopefully, other cities, like Minneapolis, won’t share a samilar fate.

WELL, THAT was the biggest audience on record for that loser channel.

My com-laborer’s sister-in-law makes USD/83 every Hour on the web . She has been jobless for a half year however a month ago her salary was USD/13726 simply taking a shot at the web for a couple of hours. have a check here.this interface !~!~!~!.GOOD LUCK ? …………………………HERE►Read MoRe

Bow and arrow? Never. I have a glock 21 and several 35 round clips. And if they had come after me, they would be dead. Folks, if you don’t stop this, they will get worse. Don’t let them get within 10 feet before putting lead on target. And the way things are now, you need to get a lot more magazines.