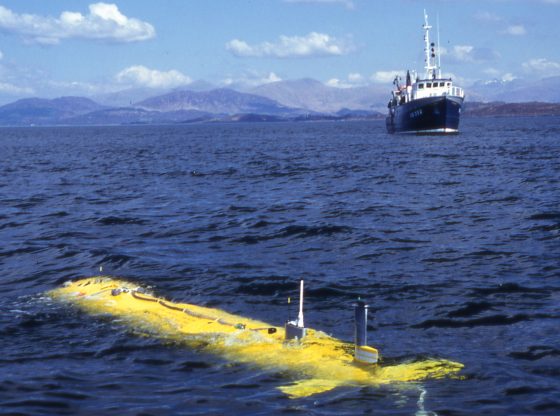 As China continues to flex its naval might throughout the Pacific, and beyond, a new concern has emerged. Along with supposedly civilian underwater mapping systems I wrote about previously, we are increasingly seeing Chinese cruise missile-like military undersea drones being discovered in strategic maritime locations. Most recently, notes The Drive, one was discovered in Indonesian waters.

This raises questions, states The Drive, “about whether the Chinese government is discreetly conducting underwater surveys of routes between the South China Sea and the Indian Ocean, information that could be especially useful for its submarines transiting through these areas while submerged.”

China is dramatically expanding its submarine force along with all its military capabilities. In another report, I described a Chinese nuclear submarine seen entering a secretive underground submarine cave facility at Yulin Naval Base on Hainan Island in the South China Sea.

An Indonesian fisherman reportedly grabbed this “drone on Dec. 20, 2020, near the Selayar Islands, an archipelago that is part of Indonesia’s South Sulawesi province, in the central part of the sprawling nation.”

According to a report from Indonesian outlet detikNews, reported by The Drive:

…the drone, which had what appeared to be some kind of sensor array in its nose, was just under 7.4 feet long, not counting what appears to be a long antenna or sensor extending from the rear end. Pictures of the unmanned undersea vehicle (UUV) show that it has a torpedo-shaped body with a pair of wings mounted toward the center and a vertical tail.

Indonesian fisherman caught what appears to be a Chinese underwater drone:https://t.co/zqYrpFofbr

The Chinese underwater glider can travel for weeks over huge distances notes the Tweet by The Drive.

This current undersea drone appears very similar to at least two other Chinese Sea Wing drones — developed and produced by the state-run Chinese Academy of Sciences’ (CAS) — found in Indonesian waters since 2018.

One Twitter user posted a comparison of the just discovered sea drone with the CAS’s Sea Wing drones.

A fisherman in Selayar Island, South Sulawesi, has found a UUV:

Very similar to China’s ‘Sea Wing’ UUV, which, if it’s true, raised many questions especially how it managed to be found deep inside our territory pic.twitter.com/RAiX8Xw2BK

If they are the same, or similar, The Drive explains:

CAS publicly uses Sea Wings for oceanographic research with sensors capable of measuring things such as the strength and direction of currents and water temperature, oxygen levels, and salinity. These are common tasks for these types of UUVs, which are in use around the world, including by military forces.

In December 2019, the Chinese survey ship Xiangyanghong 06 launched 12 of these UUVs into the Eastern Indian Ocean…Chinese authorities did not report any of the drones going missing, but… initial reports said that 14 of the drones, rather than 12, had been deployed. At the same time, it’s not clear if the prevailing currents would have been able to carry a disabled Sea Wing all the way to the waters off the Selayar Islands.

Of course, China is not the only nation using naval drones for military reconnaissance and mapping. Not long ago, I wrote about a surface cruising drone built by the U.S. that washed up on a Scottish island near a U.S.-UK submarine base.

However, China’s mapping of strategic straits and maritime chokepoints could provide insights into its naval intentions for conflict, especially regarding the potential employment of its growing attack submarine force.

Biden will lead the way!