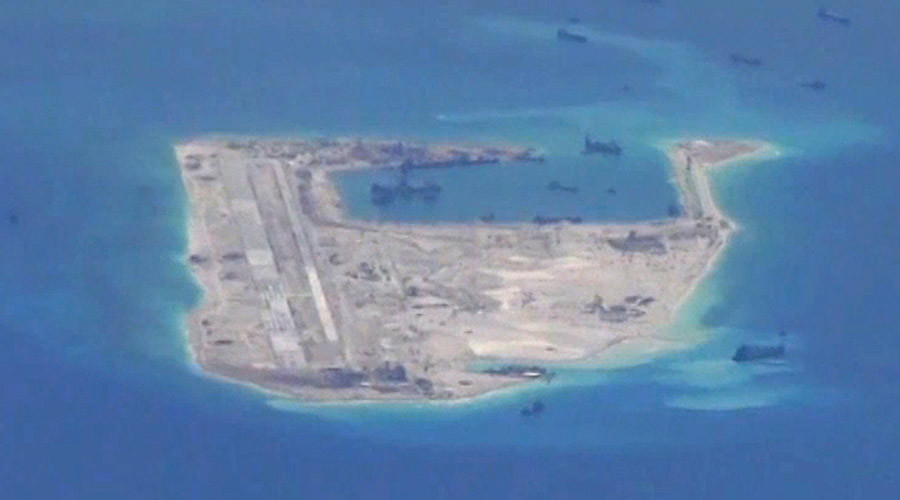 China has been increasingly aggressive in the South China Sea as of late, using the distraction caused by the Wuhan Coronavirus (COVID-19) to conduct numerous threatening naval drills and maneuvers near Taiwan, and in the rest of the region. This has caused U.S. warships to increase their regular Freedom of Navigation Operations (FONOPS) in the area, ratcheting up tensions. (RELATED: Chinese Aircraft Carrier Threatens Taiwan as USS Roosevelt Sidelined)

But now, the Express reports, satellites have spotted Chinese military aircraft from the People’s Liberation Army Air Force (PLANAF) landing on one of its man-made islands, further escalating those tensions.

Satellite images show a PLANAF at the Fiery Cross Reef on the strategically located Islands situated north of the South China Sea. Jane’s Information Group, a defence intelligence group, warned the sighting could be further signs the People’s Liberation Army Navy Air Force is starting to use it as a base of operations.

Sean O’Connor, principal analyst at Jane’s, said: “Two sightings of surveillance aircraft within a month could indicate that the PLANAF is beginning to periodically base aircraft on Fiery Cross Reef.

The area is highly disputed territory with rival ownership claims from Vietnam, Brunei, Malaysia, the Philippines, and Taiwan. The Chinese military is systematically continuing its construction of artificial reefs in the internationally disputed waters, despite protests from these smaller neighboring nations. (RELATED: Are China’s Artificial Island Bases Sinking?)

The Express further notes specifics of the military reinforcements China is completing on its three most important island bases:

According to the AMTI, China now has seven outposts in the Spratlys but is focusing its efforts fortifying a trio of bases dubbed the ‘Big Three’. The largest and most advanced at Fiery Cross Reef has been completely transformed from three reefs in 2009 to a major military installation today. Fiery Cross is now home to a military garrison, an airfield and a naval base after years of dredging piled up tons of sand to create an artificial island.

Analysts are concerned that China’s ultimate aim is to buttress its claim to the majority of the South China Sea, and as the Express reports, this is “increasing fears the movement of ships and aircraft in the region could soon be restricted by Beijing.”

O’Connor also said in the Express that, “Aircraft could be regularly rotated through the base from other PLANAF units in the South Sea Fleet.” He said there was space in the hangar at Fiery Cross Reef for at least three surveillance aircraft and others could be parked in the open.

These illegal Chinese activities have raised concerns in the U.S. military. U.S. Navy Commander Reann Mommsen, spokesperson for the U.S. 7th Fleet, was quoted in the Express as saying, “Unlawful and sweeping maritime claims in the South China Sea pose a serious threat to the freedom of the seas. “Including the freedoms of navigation and overflight and the right of innocent passage of all ships.”

As I noted earlier, two U.S. Navy warships, the guided-missile destroyer, USS Barry, and the guided-missile cruiser, USS Bunker Hill, recently sailed through the contested Spratly Islands as part of a series of FONOPs. Expect more assertive U.S. naval activity in the area in the next few weeks and months.

READ NEXT: The Most Egregious Examples of China’s Coronavirus Cover-Up >>

Stop doing any business with the slope head little bashtards. Let their goods rot on our docks. We are right now with China where we were with Japan back in 1939. They have been firing financial shots at our bow for years now. We end up eatting our politicians scheit. So long farewell China. Oh we have to stop selling our coal to China. Remind AOC that China and all the mask wearers in Beijing have 30 years to be a part of the clean air act. It does nothing unless everyone is on board with the clean air act. Obama gave China all of our countries Patents. Gave them Cash For Clunkers. What we got was breakable knock-offs. We don`t need any countries business monkey business.

I had that BS three times yesterday. Never did get an answer as to why it was being moderation. I used a word, s. u _ k s, that they used 3 times in their post. Don’t know if that was it or not. Didn’t expect it from AAN.