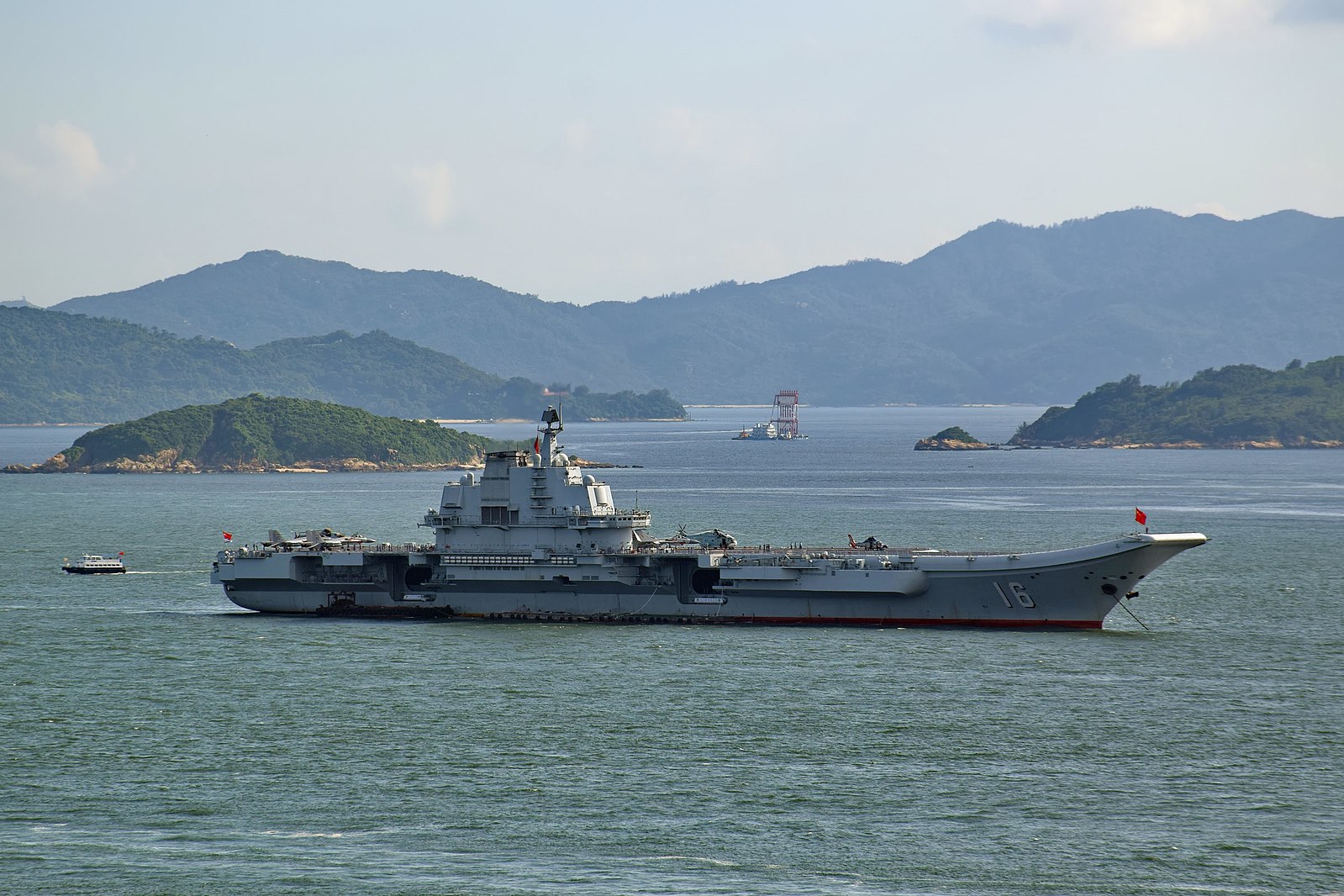 Using the global distraction created by the Wuhan coronavirus (COVID-19), and the sidelining of the USS Roosevelt due to COVID-19, China’s People Liberation Army Navy (PLAN) is deploying its new “carrier strike force” to threaten Taiwan.

Japanese defense sources cited by the South China Morning Post (SCMP) first reported that the fleet, led by China’s first aircraft carrier, the Liaoning, was seen passing through the Miyako Strait near Okinawa, and then turning south toward Taiwan.

With the USS Theodore Roosevelt aircraft carrier offline in Guam due to the COVID-19 outbreak, the Chinese warship is the only carrier now active in the Western Pacific, filling that vacuum.

The Liaoning, China’s first aircraft carrier, is based on the hull of an old Soviet warship and uses a ski ramp rather than catapults to launch aircraft. The South China Morning Post reported that it was “escorted by two Type 052D guided-missile destroyers – the Xining and Guiyang – two Type 054A guided-missile frigates – the Zaozhuang and Rizhao – and a Type 901 combat support ship, the Hulunhu.”

Taiwan scrambled warships and aircraft on Saturday night to monitor the movements. On Sunday, “a US Navy EP-3E electronic reconnaissance aircraft flew past the south of the island en route to the South China Sea, according to the military aircraft tracking Twitter account, Aircraft Spots,” cited by the SCMP.

On Sunday the Chinese carrier passed by the eastern and southern coasts of Taiwan to carry out naval drills, and according to Taiwan’s Defense Ministry, Taiwan’s armed forces monitored the carrier group’s progress and conducted its own unspecified naval and military operations, reported Reuters.

Earlier, on Thursday, according to the SCMP, a Chinese “H-6 bomber, J-11 fighter and KJ-500 reconnaissance plane from the PLA Air Force flew over southwestern Taiwan and on to the western Pacific where they followed a US RC-135U electronic reconnaissance aircraft.”

This aggressive deployment of this Chinese carrier strike group near Taiwan’s waters – precisely after the USS Theodore Roosevelt was very publicly sidelined – demonstrates the bigger strategic picture missing during the recent controversy over the US carrier captain’s actions and dismissal.

Don’t think the USS ROOSEVELT was China’s obstacle – China must be already collapsed economically the way it is striking out like a snake that has no chance, just its fangs that aren’t dead yet, but the US fight means that we fight sick to win b/c Patriots never give up.
China is at its peril.

I TRULY hope the rest of the world begins it’s ANTI-CHINA campaigns!! We MUST move our pharma mfg and computer chip mfg back to America. We must also NEVER allow any Chinese company like Huawei to provide America or our allies 5G cell service.

IMAGINE the abilities China will have – being able to see and hear every call and text sent in a country if they’re using Huawei’s 5G Service . . . . . including those sent and received between a nation’s govt officials, CEOs, etc. China Govt is a danger to all!!!!!!

A. D Roberts
Reply to  DetroitDom

Every heard the term “MACHO”. That is what you get when a little guy has all kinds of ego and vanity and no chance of winning. This is what you get from third world countries and from little men who run ‘china.

Top US NAVY brass that mishandled the Roosevelt issue should be relieved of command. First the captain’s superior officer should have agreed to isolate those infected from the rest of the crew; all non-essential crew should have been removed from the ship and quarantined. Any personnel actions taken should have been confidential. None of this should have leaked to the media and those guilty should be stripped of rank and discharged.

Then the China issue. The Chinese people are not the problem; it is the Chinese Communist Party that controls the nation with the most extreme punishment and threats. They would have no problem with starvation of their people to ‘beef-up’ their military or use bio weapons against any nation that would oppose their military actions. We are too entangled with them economically and long range plans should be commenced to change that. That will never happen with the divided nation we now have and the one political party who would fight any attempt to “free-the-shackles”.

Gee, I wonder how they found out about our carrier and their “issue”?

Do we still remember that the US military said it would take at least 10 years for them to manage such a complex operation while they were practicing on that Ukrainian version. Not only did they build this thing but they are pretending it’s fully functional and I heard the Jets on it looking awful lot like ours.

Makes sense to me! I remember it was I think XPRES. Obamas 1st Term maybe ’08 or ’09 and two sets of spies were partially caught here in Inglewood Calif. a whole Chinese Family working for a company were they stole ship plans! The mother and father were caught but not the Son! Then in Inglewood a set of Russian Spies also stole either Navy or Airforce information! LATimes!

Not only do the Chinese Jets look EXACTLY like our fighter jets, so do the Russian jets. The theft by the Chinese is amazing. They produce nothing. Only copy.