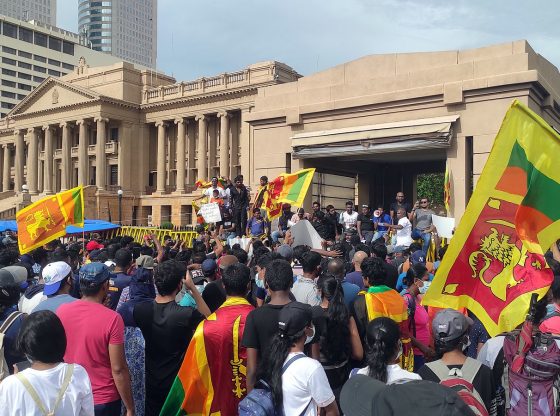 The government of Sri Lanka is now in complete disarray after a massive mob of protestors stormed the capitol and presidential palace, leading many top officials to flee or resign.


Sri Lanka’s embattled president offered his resignation Saturday as protestors overran the capital and stormed the presidential palace and the private residence of the country’s prime minister.

President Gotabaya Rajapaksa said he will step down on July 13, according to a video statement released by Parliamentary Speaker Mahinda Yapa Abeywardena, according to adaderana.lk, a Sri Lankan news service.

“The decision to step down on 13 July was taken to ensure a peaceful handover of power,” Abeywardena said. “I therefore request the public to respect the law and maintain peace,” he said.

The speaker also said that Rajapaksa, who holds American as well as Sri Lankan citizenship, and has ruled over the South Asian country since 2019, has agreed to implement decisions taken at a meeting of political party leaders Saturday evening.

Many conservatives on social media pointed out that many of the polices that caused the Sri Lankan economy to collapse were enacted as part of a radical environmentalist ideology:

It's Sri Lanka, so obviously it doesn't exactly lead the U.S. national news, but what is happening there due to truly mind-bogglingly bad "zero-carbon"/environmentalist leadership decisions is actually ripping the nation apart. There's no food or fuel now. It was…a bad idea. https://t.co/Ll9xdPlxVS

I finally got to the bottom of the Sri Lanka crisis.

This is where it started – their government took Greta seriously, implemented policies that halved agricultural production, and it spiraled from there. pic.twitter.com/5QfMX21h2l

The government wants to cut the Netherlands beef production in half, too. Farmers aren’t going to take it. Here, Bill Gates is buying up all the farm land, and he’s anti-farm. When they predict food shortages here, maybe the shortage is planned instead of coincidental.

Gates could be the straw man for China buying up everything in the U.S.! What better way to control a country then through Food and energy! Potato Head Xiden is so deep in bed with them, it will take many years and laws to remove the Chicom footprint from the U.S. if it can actually be done!

SO? So what? I’m not one bit impressed. You want to impress the world? Let a mob of Russians storm Moscow, and create a free society. THAT will be an achievement..

Meal to this story?
DON’T BE A GRETA!