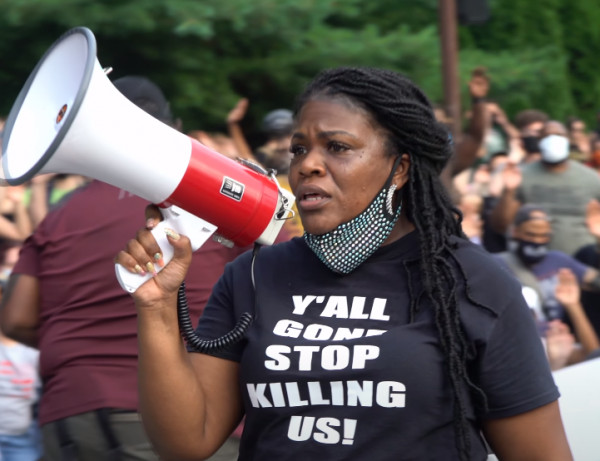 Cori Bush, a member of the ‘Squad’ of progressive House members that includes AOC and Illhan Omar, is now refusing to stop using the notorious ‘defund the police’ slogan even though many members of her own party are afraid of its negative effects on the outcome of the 2022 midterms.


“I always tell [fellow Democrats], ‘If you all had fixed this before I got here, I wouldn’t have to say these things,'” Bush told Axios Tuesday.

The progressive “Squad” member’s commitment to defunding the police comes amid growing concern about the 2022 midterm election among members of the Democratic Party, who fear “defund the police” rhetoric may have led to disappointing results in the 2020 election.

The Missouri Democrat also dismissed concerns about Democrats losing this year’s election, saying a defeat should be blamed on the party’s inability to pass sweeping reforms such as President Biden’s Build Back Better legislation.

“‘Defund the police’ is not the problem,” Bush said. “We dangled the carrot in front of people’s faces and said we can get it done and that Democrats deliver, when we haven’t totally delivered.”

Bush’s stubbornness highlights the growing divide between moderate Democrats and the more radical progressive wing of the party.

Representative Cori Bush D-Mo is a leader of the BLM Chapter in Missouri, and she is a racist and a bigot. She was elected to serve the people in her district, and are they really wanting to defund the Police in her district? The BLM people have burned buildings, killed innocent people, injured many Police Officers, destroyed Black Business’s, destroyed hundreds of Police Vehicles, and she wants to DEFUND THE POLICE, ARE THE PEOPLE OF MISSOURI READY FOR THE ONSLAUGHT OF VIOLENCE COMING YOUR WAY!

It’s time to stand and fight.

Cory Bush is not crazy, she’s just stupid. She failed to keep up with the dems’ acceptance that they couldn’t pass the so-called “build back better plan, and she wasn’t smart enough to understand the “defund the cops” has had its day, and is no longer a usable slogan. You gotta admit, though, that she makes Joe Biden look like Einstein.

I beg to differ, those that are stupid are the ones who voted her into office and emboldened her into assuming her constituents have her back.

I say this ALL THE TIME. Cory Bush (and the other leftists) is making a fortune as a Congressman. She is pretty smart to get away with this con job. It’s the people that keep voting for her that are the stupid ones.

In my opinion you are correct on most of what you said . BIDEN might look like EINSTEIN but his BRAIN sure as “HE**” is not there.

She brings back an old saying “get a rope”! The irony of it, given enough ROPE, she will hang herself! Reverse racism running RAMPANT in Misery, I meant Missouri! Sponsored and elected by the old white guy Soros!!

Why is he allowed to run rampant in our Country. Take away his Citizenship since all he does is give millions to dems to destroy this Country. Send him back to his Country that has a warrant out for him. ENOUGH IS ENOUGH.