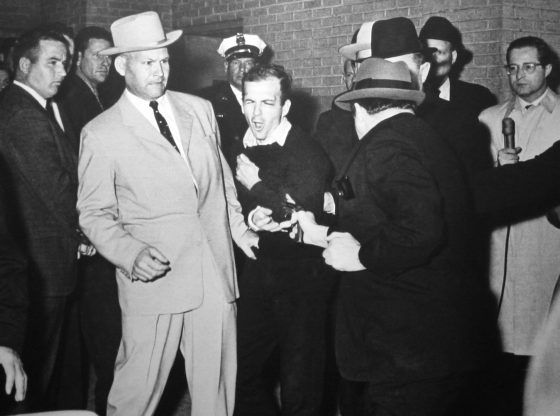 Newly declassified records relating to the assassination of John F. Kennedy revealed that Lee Harvey Oswald met with the KGB two months before shooting the president in 1963.


The files revealed that Oswald, a former U.S. Marine who was twice court martialed, met with a KGB agent at the Soviet Embassy in Mexico City exactly two months before murdering JFK.

“According to an intercepted phone call in Mexico City, Lee Oswald was in the Soviet Embassy there on 23 September and spoke with Consul Valeriy Vladimirovich,” a memo from former acting CIA Chief Tennent Bagley read.

Oswald defected to the Soviet Union in October 1959, after being honorably released from active duty into the reserves. He married and returned to the United States in June 1962, settling his family into Dallas.

The memo included a transcript of a follow-up call Oswald made to the Soviet embassy in October.

“Oswald called the Soviet Embassy in 1 October, identifying himself by name and speaking broken Russian, stating the above and asking the guard who answered the phone whether there was ‘anything concerning the telegram to Washington,’” the document continued.

“Hello, this [is] Lee Oswald speaking, I was at your place last Saturday and spoke to a consul, and they said that they’d send a telegram to Washington, so I wanted to find out if you anything new,” he said. “But I don’t remember the name of that consul.”

A KGB officer told him that “they haven’t received anything yet,” which had Oswald questioning if they had “done anything” yet.

“Yes, they say that a request has been sent out, but nothing has been received yet,” the agent replied.  The CIA memo was dated on Nov. 23, 1963, the day after Oswald was charged with assassinating Kennedy.

Oswald never stood trial, he was shot in the basement of the Dallas Police Department by nightclub owner Jack Ruby while he was being transferred to the city jail, as millions watched on live television.

Biden didn’t release that information. It was already out.

Not only that, the industrial war machine had issues with JFK wanting to outlaw nuclear weapons worldwide. Johnson didn’t like that and Kennedy was ……removed

not to mention, JFK had thoughts of dissolving the CIA

And globalists didn’t like JFK mentioning secret societies and talke about dismantling the globalists federal reserve .

If biden did release anything it is a lie… I agree with John above…my point is not only do I believe youre wrong about biden releasing anything but question you believing anything biden supposed released. all biden does is lie… and being corupt, a pedo, racist, general sexual assualt asshole, and of course a big liar all his life.

Everyone knows that Oswald was a commie. No surprise there

I don’t believe Lee Harvey shot the president. It is said to be an inside job.

I heard about and I’ve made such great money. It’s really user friendly and I’m just so happy that I found out about it.KJQ The potential with this is endless.
Here’s what I do… 𝐆𝐨𝐨𝐠𝐥𝐞𝐩𝐚𝐲𝐬𝟎𝟏.𝐓𝐤

All you libby snow flake sheep can stop collecting welfare now, congratulations on your first job .

I’ve read that. Oswald was trying to get back to RUSSIA because he was afraid
To stay in the US.

not to mention it was the USSR back in the day.

I had read that at one time, Oswald was a radar operator that tracked the US U-2’s that were deployed from the USMC air station on Okinawa. He would have some valuable info to give Mother Russia if this is true.

I was one who witnessed Jack Ruby shoot Lee Harvey, on TV!