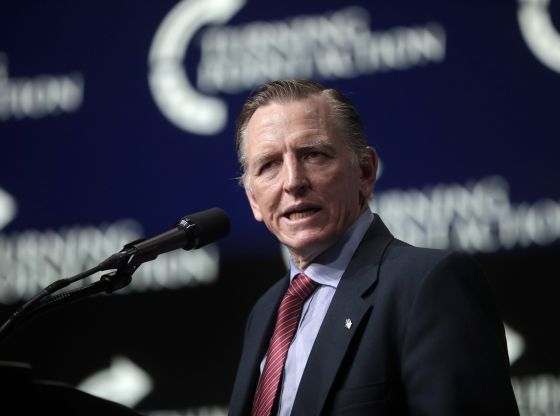 The House of Representatives has now voted to censure Rep. Paul Gosar over a video he posted which Democrat alleged included a threat of violence. As Mediaite reports:

The House of Representatives has voted to censure Congressman Paul Gosar (R- AZ).

The resolution passed with only two Republican votes: Congresswoman Liz Cheney (R- WY) and Congressman Adam Kinzinger (R- IL), both of whom serve on the January 6 select committee.

Gosar came under intense criticism last week for a video inserting himself into an Attack on Titan clip where he is depicted as a character killing a titan depicted as Congresswoman Alexandria Ocasio-Cortez (D- NY) and attacking another depicted as President Joe Biden.

Democrats roundly denounced Gosar and pushed for him to be censured. The Arizona Republican took down the tweet but continued to defend it as a symbolic representation of the immigration fight in Congress.

Gosar has previously come under fire for his previous associations with White Nationalists.

Big Deal, they did ten times worse to President Trump and NOT one person was ever censored.

You have no idea who this man is and his bravery. I don’t want to mention it in this foreign but for those who followed the election this is the bravest man in the republican party. He stood up for us we need to stand up for him. People need to stand up to this hard right now!

Very proud and grateful he represents my dist. in Az.

I would say it is both. The dems censured him to censor him.

Got that right! The hypocrisy is stunning!

He tweeted something about dementia Joe and socialist AOC. F**k both joe and AOC along with nasty Nancy and Liz Chaney and Adam Zinzinger.

If you’ll throw in Nadler, Schiff, and Schumer, I’ll buy that!!

Notice how fast the DC Beltway elected official take action on their behalf but what about the grassroots and what individual in that arena face. Here’s just one example and where are these elected officials jumping out of their cushioned seats with disdain and action?

Rittenhouse Judge Receives Hundreds Of Vile Messages: Wishing ‘Most Heinous Homicide’ On His Kids, Threatening His Own Life: Report