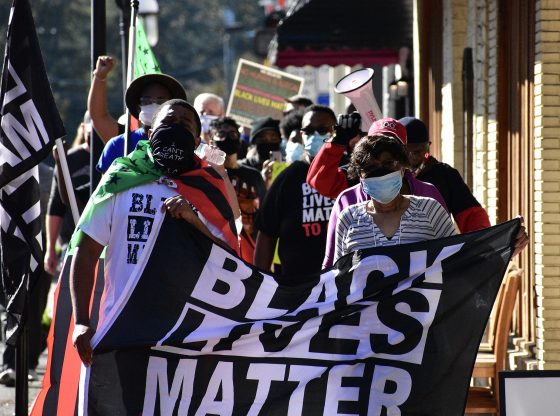 A leader for Black Lives Matter in New York City is now directly threatening the city with ‘riots’ and ‘bloodshed’ if the newly elected mayor decided to bring back special crime fighting units.


NEW YORK – A Black Lives Matter leader is vowing there will be “riots” and “bloodshed” if Mayor-elect Eric Adams reinstates the NYPD‘s controversial anti-crime unit.

Hawk Newsome,  the co-founder of Black Lives Matter of Greater New York, made the threats following a heated meeting with Adams at Brooklyn borough hall.

“There’s no way we’re going to let some Gestapos come in here and harm our people,” said Newsome after the meeting. “We pray for peace, but Black opportunities prepare for the worst.”

On the campaign trail, the former NYPD captain promised to bring back the anti-crime unit. The task force was disbanded at the height of the Black Lives Matter protests last year.

The radical group’s popularity has plummeted since the height of it’s popularity in the wake of the death of George Floyd in Minneapolis.
Advertisement
HELP This Conservative Star DESTROY Maxine Waters! [ACT NOW]

If you’re not a criminal you should have nothing to fear from an anti-crime task force, period! So, what does this say about the mentality of BLM leaders (and followers who mostly just love to burn, loot, and destroy other people’s property).

The BLM bowel movement has diminished, and has been exposed, and no more celebs or virtual flag waving white idiots will give them money any more for their thug lazy leaders to spend the money on their own selfish wants… So it’s time for the do nothing leaders of the Burn Loot Murder crowd to actually get JOBS.. Bring your best menacing do nothing blacks to the riots and let them wait out there penalties in jail. I only hope the CITIZENS of NY come out by the hundreds and help the police shut this garbage down! Time to take back our cities and call a thug a thug, no free passes because of their color!! As they love to quote MLK when it only helps them, let us judge them by the content of their character, and in this case, THEIR ACTIONS!!! LOCKEM UP!

Outstanding statement of truth you’ve made!

I doubt MLK would have approved the way these thugs burned ,looted ,and murdered others , for equal justice . MLK is probably rolling in his grave . These clowns who did what they did don’t deserve a damn thing . Act like someone with common sense which none probably have a inkling of . Get a damn job and be somebody .

A once-great city recently voted to remain a not-great city.

Give Adams a chance; he is a HUGE improvement over the racist di Blasio.

Demo and CATHOLIC are the same. NO Catholic is an American. they may be citizens, never Americans. The Vatican is a Nation, with its own flag, ‘head’ and ‘constitution’. These are all at opposition to being an AMERICAN. F J Biden, Pelosi, Kerry, Murkowski, Christie, Deblastio, Cuomo are all examples of the thousand years of 100% FAILURE the CATHOLIC bring to wherever they are. Vote accordingly.

m b
Reply to  alfie

m b
Reply to  dave holt

NYC, Baltimore, Philadelphia, Richmond, New Orleans, Chapel Hill and Durham, Lakeland, and hundreds more cities are nothing but unsafe history destroying jungles, run by the jungle. And the jungle doesn’t care about crime, survival of the fittest.

m b
Reply to  Robert Smith

Agree 100 percent. I liked what law enforcement did in the 1960’s and it needs to happen again now, the hell with the liberal courts. When mobs were in the street, law enforcement watched, but when rocks were thrown, storefronts smashed, etc., law enforcement, police dogs, etc. herded all of the troublemakers on to prison buses for their free ride to jail. This cleared the streets and minimized damage. And judges back then would give those troublemakers 30 days in jail (to cool their jets) and a fine for disturbing the peace, unlawful assembly, etc. The judges didn’t care about prison conditions either.

People say this aboiut the FBI too but there is nothing futher from the truth. Now do these police target blacks? I think not but the FBI, a totally usless bunc of cowards, shuld not be targeting parents either. Just sayin

Alfie the bigot with more BS. Thanks for contributing.

He just proved who he was without a doubt . He’s a thug .

We do need the 1960’s approach, “shoot to kill” resurrected. Liberal Dems like special rules for special people.
Full circle since the 1960’s civil rights protests. Civil rights legislation and thereafter made villans out of white men. That’s still the same, but were back for more because it seems there never is enough preferential treatment in a liberals mind. So lets take down the country. With a delusional whack sellout in charge it is entirely possible. Is there enough time to correct things?

The money they raise goes straight back to teh Democratic party. DemonicRAT party are terrorists

Now WHY would anyone threaten riots if an ANTI-CRIME task force was reinstated, unless they PLANNED on committing crimes?

They WILL commit crimes! And get away with it!

I kinda agree with this as I think good old Hawk has his place in all of this crime and doesn’t want to give it up. I think an investigation should be initiated and look at Hawk and see if he is a criminla if he is then arrst him amd all involved in criminla activity. If not then he can protest anything he wants but… now this is a big but…. he has already broken the law by making threats about perpetrating violence on a city, hence people.

shoot him first and investigate later, in fact if the trash shows up in the streets and begins to riot – shoot them all just as they begin. Real Americans need protection from negro and honky morons from the burn loot & murder gang banger aholes .. oh and those snot nosed punks in antifa as well ..

So, we are being ruled by BLM now. We are a country of law and order. If you don’t like that relocate to another country of your choice. Everyone wants a get out of jail free card. Don’t break the law and you have nothing to worry about. Raise your children to respect law and order and value human life.

His Fraudulency doesn’t believe in law and order can we relocate his dementia ridden arse to another country?

If White supremacist’s are our biggest problem “according to ALL OF THE MEDIA” what do we call this?? A open and DIRECT threat to create chaos if they don’t get their way, sounds a bit more like a terrorist group demands!

The only way to get rid of these “brown shirts” (old German thugs of Hitler) is to vote them out. The Catholics are the “brown shirts” and mean to destroy the USA. A third of congress and senate are VATICAN oppressors dogma victims And all they can do is mouth the VATICAN oppressors desire to destroy the USA just like they have destroyed every nation they kiss. Vote for ANY CATHOLIC and you vote for a traitor, and the borders will never be sealed from the ILLEGAL ALIEN CATHOLIC INVADERS.