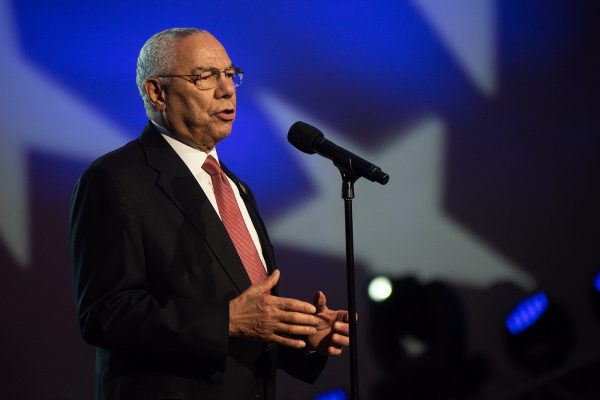 Colin Powell, the American war hero, the former head of the Join Chiefs of staff, and former Secretary of State under President George W. Bush has died at the age of 84.

His cause of death is reportedly due to complications from a Covid-19 infection.

Gen. Colin Powell, the influential former secretary of state and chairman of the Joint Chiefs of Staff who played a pivotal policy role during the administration of then-President George W. Bush, died Monday at 84 from complications related to COVID-19, his family announced.

“We have lost a remarkable and loving husband, father, grandfather and a great American,” his family said in a statement, adding that he was fully vaccinated.

The statement continued, “We want to thank the medical staff at Walter Reed National Medical Center for their caring treatment.”

Powell was the first African American to ever serve as Secretary of State.

Too bad it wasn’t Hillary

I agree with Andy. But Powell was a rino. He jumped on the Obama band wagon just to support a “brother “. Sounds racist to me Good riddance

HEY, let’s not get fresh!! The man just died, hold off for at least a few days out of respect to his family.

If you paid attention he was CRYING when he made that “endorsement”, it was clear that he was threatened to make it!!! I’m sure they didn’t threaten HIS life, probably threatened his grandchildren’s lives; what would YOU do???

Hillary is an elite democrat, she won’t be catching Covid nor having complications from the vaccine she won’t be getting.

he is running the show behind the joe curtain.

The Wrong One Died!

With everything they have out there now, it is a shame they could not save him.

You are assuming it was COVID but the sad truth is news has turned into nothing more than a weapon to tell us what they want us to hear and believe. I doubt anything the news media has to say about ANYTHING!

He should have gotten the vaccine! He would have lived through the infection if he did!

If this wasn’t meant to be sarcastic, did you miss the part where he was fully vaccinated. He most likely got COVID as a breakthrough infection as so many have. Believe me it’s not the unvaccinated that are causing the problem in 2021. Most of us have had the virus and don’t need it.

I understand that he had Multiple Myeloma, a rare and invariably fatal cancer with a 5-7 year life expectancy from date of diagnosis. More likely that he died with Covid, not from Covid.

Reply to Lou: I read in another article that he DID get the vaccine. There are vaccinated people who are dying and/or experiencing adverse reactions so I do not agree with you.

Indeed, Kevin! If the poor man died of a heart attack or was run over by a garbage truck YET the post-mortem revealed that he had COVID in his system, you better believe his death certificate cause of death was rubber-stamped as ‘COVID.’ Like you, I believe nothing our Government tells us anymore. We cannot lie to the Government, but the Government can lie to US anytime it bloody well pleases.

they did say he was fully vaccinated… THAT’S what he dies from!!!

No great lose glad to hear it

James Hutchins, NO ONE was meant to stay here on Earth forever. Not even you.