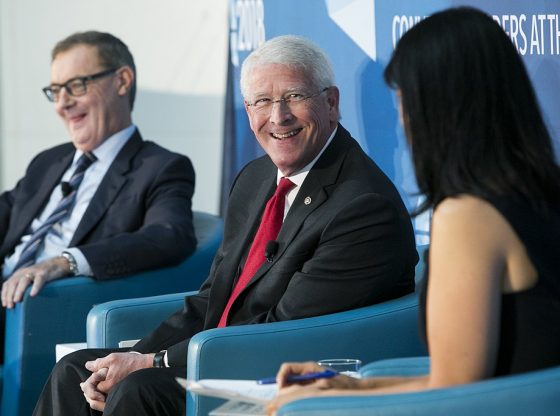 “Senator Wicker tested positive this morning for the COVID-19 virus after immediately seeking a test due to mild symptoms. Senator Wicker is fully vaccinated against COVID-19, is in good health, and is being treated by his Tupelo-based physician,” Phillip Waller, Wicker’s communications director, said in a statement.

“He is isolating, and everyone with whom Senator Wicker has come in close contact recently has been notified,” he added.

The Senate is in recess until mid-September after leaving town last week.

Less than 1 percent of fully vaccinated Americans have had a breakthrough case that results in hospitalization or death, according to data from the Centers for Disease Control and Prevention.

Sen. Wicker is the second senator to test positive for the breakthrough case after South Carolina Senator Lindsey Graham also tested positive despite being fully vaccinated.

According to reports from The Hill:

Hickenlooper became the latest on Thursday afternoon to announce he had tested positive, saying he tested positive after “experiencing mild symptoms.”

“I’m feeling much better and will continue to isolate at the direction of the Congressional Attending Physician,” he said.

King, in his statement, said that while he and his staff took precautions to social distance while in D.C., that he began “feeling mildly feverish” on Wednesday and got tested in Maine on Thursday.

“It came back positive. While I am not feeling great, I’m definitely feeling much better than I would have without the vaccine. I am taking this diagnosis very seriously, quarantining myself at home and telling the few people I’ve been in contact with to get tested in order to limit any further spread,” King said in a statement.

Less than 1 percent of fully vaccinated Americans have had a breakthrough case that results in hospitalization or death, according to data from the Centers for Disease Control and Prevention.…

Seems those with “breakthrough” infections didn’t know they were contagious and although only 1% unselfishly got sick, they each infected innocent non-infected humans while they attacked those who refused mRNA “vaccination