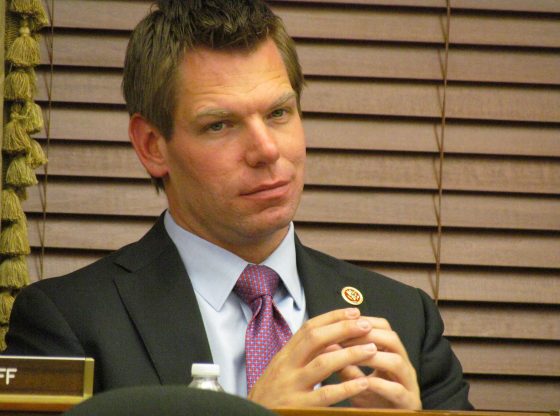 House Minority Leader Kevin McCarthy filed a new motion today to strip Democrat representative Eric Swalwell of his assignment on the House intelligence Committee due to his previous ties to a notorious Chinese spy.

The alleged spy in question, Christine Fang, had previously helped Swalwell fundraise and also placed an intern in his office before fleeing the country. She also allegedly engaged in sexual relationships with a number of low level Democrat politicians in exchange as a way of gaining political access.

McCarthy told Punchbowl that “if an individual could not get a clearance in the private sector, they shouldn’t be on Intel.”

“I don’t think it’s that difficult,” he added.

I have filed a resolution to remove Rep. Eric Swalwell from the House Intelligence Committee.

Swalwell engaged in a years-long relationship with a suspected Chinese spy, and his conduct makes clear he has no place serving on the committee in charge of America's top secrets. pic.twitter.com/8Tb9TOh976

McCarthy has been calling for Swalwell to be removed from the Intelligence Committee for months over the Democrat’s previous relationship with Christine Fang. Axios reported that Fang helped fundraise for Swalwell during his 2014 reelection campaign and place an intern inside his office before leaving the country in 2015 amid a federal investigation into her actions. Fang also allegedly targeted a number of other high-profile Democrats in California.

“These are Chinese spies that go down to the level of a mayor, they court and help a city council member become a congressman, this congressman now gets on the Intel Committee, they are only selected from the Intel Committee by the leaders of their party, meaning Nancy Pelosi,” McCarthy said on Fox News in December.

It doesn’t matter what Swalwell did, he’s a Democrat so therefore in Pelosi’s eyes he can do no wrong…as long as he votes however she tells him to. It’s all just about power to her, and if it hurts the American Citizens, well, that’s just an unfortunate side effect, but immaterial……let’s have more abortions huh Nanc?

Personally Swalwell and Schiff kept on for 4 years about the false narrative of Russian collusion. All lies and deception to the American people for Trump’s term in office.
Swalwell should be removed from his duties on the committee period. As you said Dems can do no wrong. Media doesn’t report or twists facts to make the Dem look innocent or good.

What about pelosi’s treasonous conduct? She should have been arrested years ago.

Arrested and punished severely. Both parties have covered her as. … biggest “dog and pony show” these politicians are putting on…

Hurrah… Get rid of that loser Swalwell!