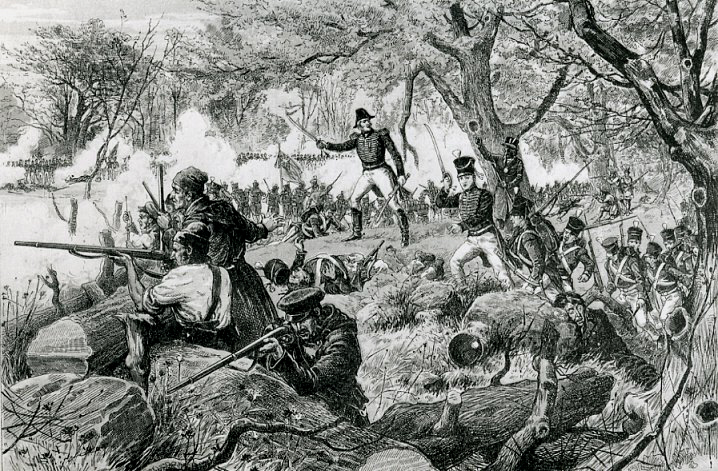 A draft of the introduction to the Democratic Party’s platform honors the indigenous peoples who formerly resided in the area that became Milwaukee, the site of this month’s DNC convention.

It fails to mention that many of the tribes recognized fought against the United States with British-supplied arms in the War of 1812. (Washington Free Beacon)


The platform praises Native American communities that resided in the region, including the Chippewa, the Ho-Chunk Nation, and the Menominee Nation—groups that sided against the United States in the brutal 1812 conflict.

The language represents the leftward shift of the Democratic Party, which has voiced support for Native American sovereignty in its party credo over the past two decades but has not included a preamble honoring specific tribes at the top of the platform until this year.

The Potawatomi, one of the tribes praised by the DNC, clashed with American soldiers in one of the most violent conflicts of the war, the Battle of Fort Dearborn, in which 12 children were killed by indigenous fighters as they attempted to evacuate the fort. The leader of the evacuation, Capt. William Wells, had his heart torn out and eaten by the Native American tribe, according to historical accounts.

The tribe also participated in the Battle of Frenchtown, also known as the “River Raisin Massacre,” in which tents for wounded U.S. troops were set on fire by indigenous fighters, and soldiers who tried to escape were killed with tomahawks.

Five Governors Who Forced Long-Term Care Facilities to Take COVID-19 Patients
Would You Do Business With Someone With Different Political Beliefs Than You?

During WWII the Indians had a secret code that helped us out immensly because no other country knew it. They worked with the Government to help us win the war. KUDOS to the Indians. Most Americans (except the democrats) Love the American Indian.

Different tribe. My Brother-in-law is a Comanche. He is a fine gentleman and an outstanding Christian. He and my sister tried to assist the Ponca Indians who live near him. Those Indians were mainly drunk and hated my sister since she is white.
Just like with all other races, it is a matter of the INDIVIDUAL. Those who have integrity are great. Those who are taught to be bigots are to be avoided, UNLESS God tells you to go to them.

Native Americans apparently lack an enzyme to efficiently detoxify ethyl alcohol. In other words, they are genetically “unable to hold their liquor.” This trait was exploited unmercifully by unscrupulous traders who fed their “thirst,” all the while knowing that it was an easy way to take advantage of them.

That wasn’t tobacco in the “peace pipe,” either.

You are referring to Navajo “code talkers”. They spoke in their native tongue, which confused the enemy to no end.

FYI, it was not a secret code, they were speaking in the native language!

..and therein lies the code the Japanese did not understand.

It was the Navajo Indians and it wasn’t a code. It was their native tongue they were speaking. No one else knew the language.

To further add to the Japanese confusion, within their language they also used code words for certain items and actions.

The Navajo Code Talkers. Their nation? United States of America. Leftists are systematically removing the mascot Indian names to erase history and in doing so, cause interest in the Indian past to disintegrate, forever bleached from day-to-day living. Washington Redskins, Spokane Indians, Warriors, and other teams by their very names spark young students’ interest in learning and bring a distancing past into the foreground. I would think they would want that. And the ones I’ve spoken with, my own cousin a chief, do.

So.. My uncle who was a SGT Maj. in the U.S Marine Corp actually was influential in getting the General who he was working for during WW2 in the Pacific to investigate the Code Talking Navaho Indians language which was not known to the Germans and the Japanese.. They were supposed to be used in Europe aa well as the Pacific..My uncle spoke several European languages including Slovakian dialects, Hungarian, German and some Russian since he came in contact with these languages when he lived in Prague for about nine years… before coming back to America and joining the Corp.. in 1927…

If Dems really want to honor Native Americans, then give back the land you stole from them. They actually own Chicago, Tulsa, and many other jurisdictions.

Wow. Democrats are getting desperate. Everyone knows the Democrats have always hated Native Americans.

No matter who we are there are good and bad in us all. Just because a few did what they did, does not mean they all are that way. Why is we can not judge people on character, integrity, instead of the bad apple that might show up.

A. D Roberts
Reply to  Esther

Sounds good. So why do we find that so much is said that is good about a bad person who has just died. Talk about integrity? YOU can’t claim the higher ground and be saying good things about John McCain, Harry Reid, John Lewis, Bill Clinton, etch.

AZtejas41
Reply to  A. D Roberts

I will take exception to John Lewis. I prefer to remember him coming across a bridge in Alabama, with nothing to defend him, except the Grace of God. I know he did some things I disagree with, but he has that right.

A. D Roberts
Reply to  AZtejas41

See things in the eyes of God. When you sin JUST ONCE, it is enough to condemn you to eternal punishment. It is as if you had broken all the laws of God. Now see John Lewis for all the bad he did. I cannot remember a single time in the last 4 YEARS that he was on TV that he was not trying to do damage to Trump or the nation.

I respectfully disagree. Anyone– yes, ANYONE, who knows the history of the Democratic Party and STILL votes Democrat is EVIL. Plain and simple. From 1829 and the election of Andrew Jackson, the Democrats have been responsible for genocidal treatment of Native Americans, they created the KKK, they were the slavers and the cause of the American Civil War. Democrat James K. Polk started the Mexican-American War. They embraced Marxism in the 1880s. Esther, there is NOTHING good about the dems and the party needs to be abolished as a TERRORIST ORGANIZATION.

The dem party is now 90% commie. This election is do you want freedom or do you want enslavement.

Look at the voting record of Republicans now. Start with McConnell, Murkowski, Collins, Alexander, Cornyn, you can find it on CONSERVATIVE REVIEW SCORECARD.

….because we’re not supposed to be judgmental….