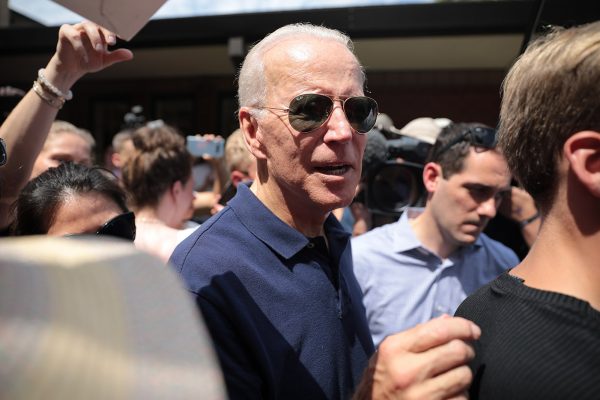 A recent virtual campaign event for presumed Democrat frontrunner Joe Biden was marred by a series of highly embarrassing interruptions.

As reported by The Hill and pointed out by various folks online, despite being delivered safely from the controlled confines of his Delaware home, Biden’s livestreamed virtual campaign speech Monday ended up being marked by “repeated interruptions” and distractions, including honking Canadian geese, a Secret Service member seen lurking in the background, and a ringing cell phone.

“The pandemic has unleashed familiar forces of hate, fear and xenophobia that he always flames,” Biden told the AAPI Victory Fund in the live-streamed speech. While that bigotry has “always existed in this society,” said Biden, “this president brought it with him, has brought with it a new rash of racial messages, verbal and physical attacks and other acts of hate, some subtle, some overt, against the Asian American and Pacific Islanders.”

But while he delivered his racially charged rebuke of the president, Biden’s supposedly controlled virtual environment conspired against him.

Joe Biden joked that the geese honking VERY LOUDLY in his pond “are trying to get away from the virus.”

Why won’t he acknowledge that the coronavirus came from China and has affected the whole world? pic.twitter.com/QH9jAbb3zx

While the event was truly embarrassing, honking geese and ringing cell phones will be the least of Biden’s worries when he inevitably faces Donald Trump in face to face debates in the fall.

What kind of a person tries to lure people into a SCAM? Work at home? Now? For desperate people? Shame on you.

In other words none of the interruptions were deliberate attempts to distract or interfere with his campaign speech? What was the size of the crowd present that day, do tell.

Joan Freda
Reply to  A Olsson

Ha, thank you for the laugh this morning. That was a pretty cleaver estimate.

A. D Roberts
Reply to  A Olsson

For those like me who believe in God, I would say that God intervened. NOW if America had any sense, they would see just how evil he is with:
1. Fire a shotgun in the air.
2. Sexual assault on a campaign staff worker
3. Forcing the firing of an investigator into Hunter Biden’s gas company gig.
4. Voter fraud that is just now starting
5.
Pray. The fervent prayer of a righteous man availeth much. But first you have to be RIGHTEOUS.
Look at the catholic Pelosi. Look at Schumer. Look at Nadler, the Beaver, Look at Schitt, the lying deceiving driving force behind the FAKE IMPEACHMENT.
And then look at the LOCK DOWN that has not saved a single life but has destroyed our economy and put thousands into free food lines. What price are we paying for the false claims of saving lives.
We know that a great many of those who have died DIED from flu and not from corona. We know that Sweden, Taiwan and Singapore did not LOCK DOWN and they did no worse then the rest of the world. We know that Europe has sent their children back to school. WHY? Because the children just about NEVER get sick and very rarely die.
IT IS ALL LIES.

gandolf the White
Reply to  A. D Roberts

Meant to say Hillary and not Pelosi.

gandolf the White
Reply to  A. D Roberts

Why will Biden not confess that he and his family have been making a killing from Ukraine and China. They have taken lessons from Hillary and Bill.
Joe admitted that he got the presecutor in Ukraine fired in order to protect Hunter. This is REAL collusion. This is what Americans recognize as corruption. Just like they recognized the corruption that caused the deaths of the Benghazi FOUR and Seal Team SIX.
Biden outed Seal Team Six. He got them killed. Someone in the military sent them out without ANY protection, had them lined up with a massive attack on their Chinook helicopter and the muslims took revenge for the killing of Osama, the friend of Obama.