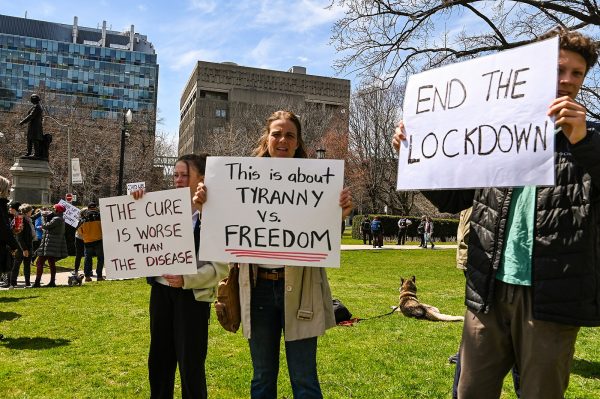 Many Americans are beginning to peacefully come out against the lockdown measures that have taken place across the country and the overreach by some states. Here are the unsung heroes leading the charge for a commonsense response to the legitimate danger poised by the coronavirus (COVID-19) while ensuring our economic livelihood:

Barr previously announced that the DOJ would take legal action against governors whose COVID-19 actions infringe on civil rights.

Kansas Gov. Laura Kelly (D) got a reality check when Wichita District Judge John Broomes ruled her decree limiting attendance to in-person church services to ten people or fewer illegitimate. Judge Broomes pointed to the fact that Gov. Kelly had not put these restrictions in place at airports and on public transportation in his ruling.

Dys is the special counsel at First Liberty Institute. He works exclusively to uphold the religious liberty of all Americans. In recent weeks, he’s taken on clients like the King James Baptist Bible Church of Greenville, Mississippi, whose congregants were issued $500 tickets for attending a drive-in service. Dys is committed to preserving the inalienable rights recognized and articulated by our Founders.

Staver is the chairman of the Liberty Counsel, a nonprofit law firm dedicated to religious liberty. Staver has taken exception to Kansas City Mayor Quinton Lucas’ lockdown order, which he says compels churches to “surveil, track and spy” on worshipers who attend in-person services. While Lucas strongly disagrees with Staver’s characterization, many in the community feel the mayor’s actions have gone too far.

The leader of the United Kingdom’s Brexit movement, Nigel Farage, has made an effort to expose his country’s ongoing migrant crisis while, internally, Great Britain is under strict lockdown.

I witnessed first hand our Border Force acting as a taxi service for illegal migrants in Dover this morning. This scandal continues and people have got every right to be angry about it. pic.twitter.com/1uwqIQyjJu

Farage tweeted about the incident afterward.

Two police officers just knocked on my door to advise me on essential travel.

They had received a complaint that I had been to Dover to report on the illegal migrant scandal taking place.

What a total waste of time and money.

Michigan House Speaker Lee Chatfield, 31, is leading the charge in the GOP-controlled state legislature to sue Gov. Gretchen Whitmer (D-MI) for unauthorized use of power. Chatfield told Michigan’s second-largest paper that Republicans in Lansing take the pandemic seriously and were willing to compromise with Whitmer on her proposals, excluding an extension of the stay-at-home order but she refused.

One of California’s last conservative bastions, the city of Newport Beach has sought a middle path to dealing with COVID-19. While Gov. Gavin Newsom (D) is promoting a list of government-approved outdoor activities during lockdown like “exploring rock pools” the Newport Beach City Council voted 5-2 to keep their beaches open while enforcing social distancing guidelines.

Cordie’s point has become increasingly salient as the lockdowns have dragged on and on, depriving millions of not only their natural rights but also, in many cases, their livelihoods as well.

Now that protests have swept California, Gov. Newsom has announced modifications to his lockdown orders.

Am frankly very surprised that peaceful protest is the avenue chosen by Patriots when the nation is in the clutches of the evil Democrat KGB who’re keeping the states closed down so people cannot go to work and earn some money for survival and what is stopping the president from herding those Democrat govs into territorial military takeover so they can be escorted by US Marshals to the grig for interrogation then removed to Guantanamo to cages to meet with their JAGs for their tribunals for insurrection and sedition/treason b/c it’s evident the shutdowns are not about the virus.

Thank you for expressing your opinion which is almost tantamount to insurrection according to some liberals. Liberal pukes be dammed!! There are people all over the world waking up to the same like tyranny that the American colonies did almost 250 years ago.

Another more dangerous strain of the Corona Virus…REALLY…the Democrats are at it again!!

Hasn’t anyone thought that the Virus could be a conspiracy between China and the Democrats. After all, Trump has been putting pressure on China lately and the Coronavirus is supposedly worse for the aged (senior citizens). They are supposed to be more vulnerable and generally speaking would likely be the more conservative and Trump voters. Think about that pertaining to the upcoming November election !

Folks, the line has been drawn. Those who are demanding we all obey their illegal and unconstitutional orders or go to jail are about to see that the GIANT has been awakened. The desire was and is to destroy the economy. No doubt about it. They have never intended to open things back up until the nation was destroyed. If you will note who is demanding the LOCKDOWN, it is all Democrats with a few RINOs who hate Trump. And they could care less what happens to America.
And by the way, they have NO WAY, to prove that the lockdown has saved a single person. It is ALL about what they CLAIM to believe works. NO PROOF.
By the way. I am 71, diabetic and have heart troubles. IF anyone should be fearful, it would be me. Yet I see that the WORSE damage is what they want to do to the nation.
See what a black Democrat state judge in Dallas can do with impunity to a patriot who is trying to keep food on the table. Jail and a huge fine. And all she had to do to escape jail was admit to being greedy and selfish. NO WAY.

Who was selfish? That Democrat judge who abused his power, just like the judge in Kentucky did Kim Davis.