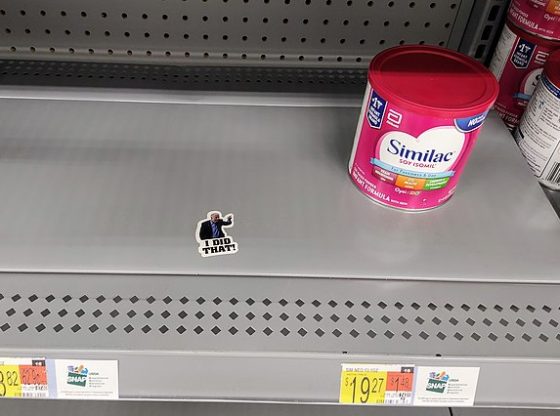 The left and most media (sorry, same thing?) blame “corporate power run amok.” House Speaker Nancy Pelosi says, “There might be a need for indictment!”


They blame Abbott Laboratories, because it shut down a Similac plant. The Food and Drug Administration says unsanitary conditions led to deaths of two infants, but Abbott denies that its formula recall had anything to do with those deaths.

In any case, one factory closure doesn’t normally cause massive shortages.

My new video gives the real reason for the formula shortage.

First: bans on imports. There’s plenty of formula on supermarket shelves in Mexico and Europe. Normally, American companies would just buy that and ship it here.

But they can’t, because of several destructive government policies.

That “protection” includes fat tariffs on formula from overseas and outright bans by the FDA.

There was a gray market where people were getting around these rules. “American parents enlisted third-party sellers to obtain European infant formula,” says Lincicome.

Boxes of formula arrived, but customs won’t let American parents have it. They’ve “been seizing European baby formula shipments at the border, much like a drug seizure,” says Lincicome.

Why are imports banned? For safety, says the government, but formula is often banned for stupid bureaucratic reasons.

“If you have the wrong scooper, banned!” says Lincicome. “If you don’t list a certain ingredient that the FDA demands, you’re banned!” If ingredients are listed in the “wrong” order or aren’t listed in English, the food is banned “even if a third-party retailer provides you with the English translation.”

I say to Lincicome, “I would think that government now would suspend those rules.”

“It certainly should,” he replies. “But the dairy industry lobbied very hard for these rules that provided them essentially a captive market. They’re not going to give that up easily.”

Because of the shortage, our government has now approved imports from one British company. They also launched “Operation Fly Formula,” which flies formula here in military planes.

But these responses are pathetic. They pick up only the few bottles made in FDA-approved facilities, and then they waste time re-inspecting it on arrival.

“They want make sure the formula is safe,” I say to Lincicome.

“A legitimate concern if it were infant formula from China,” he replies. “But the largest producer of formula is in Europe.
Maybe the European product isn’t as safe.

“It is!” says Lincicome. “It’s exported all over the world.” But we can’t have it because “the FDA is extremely jealous of its regulatory authority.”

Another reason for the shortage is government limits on competition.

America’s food stamp-like program, WIC, grants exclusive licenses in each state to just one company. Like all welfare programs, WIC (it stands for women, infants and children) has grown. It now buys half of all baby formula in America.

Abbott Nutrition grabbed most of that market by offering government the lowest price. Good for them. But after Abbott’s recall, there were few alternatives for parents to turn to.

“It’s going to take weeks for Abbott to get manufacturing up and running again because they’re going to need FDA clearance,” says Lincicome. “The time for fixing this was months before the crisis hit, because now we have a highly concentrated domestic market (and) a tariff and regulatory wall around the country.”

Much of what government does involves trying to fix things government messed up in the first place.

But politicians rarely admit that. They blame business.

Knew about this late last year

they can not beat us with wars ,covid, abortion, and gun control so far. Now they are trying to starve our babies to death. Huray for the demorats.