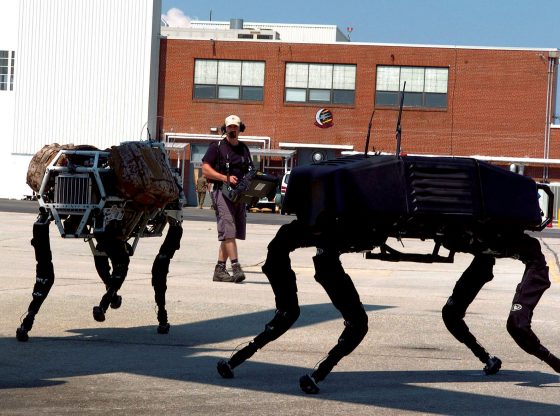 With President Biden’s border crisis continuing without any end in sight, four-legged “Robot Dogs” will soon be patrolling the U.S.-Mexico border, along with their human Border Patrol counterparts.


Many Democrats aren’t happy with using any law enforcement, but that’s a different issue.

“The southern border can be an inhospitable place for man and beast, and that is exactly why a machine may excel there,” said DHS Science and Technology Directorate manager Brenda Long. “This S&T-led initiative focuses on Automated Ground Surveillance Vehicles, or what we call ‘AGSVs.’ Essentially, the AGSV program is all about…robot dogs.”

Reaction to the armed dogs has been mixed but police view them as just another tool.

“Due to the demands of the region, adding quadruped mechanical reinforcements is a smart use of resources. Despite the dangers, and maybe even using them as cover, there are many types of illegal activity that happen in the harsh border zones,” DHS said in a statement.

Police use of such robots is still rare and largely untested — and hasn’t always gone over well with the public.

Late last year, the New York Police Department starting using one of the robo-dogs after painting it blue and renaming it “Digidog.” It went mostly unnoticed until New Yorkers started spotting it in the wild and posting videos to social media. the robot dog in New York, which was created by robotics firm, Boston Robotics, quickly became a sensation, drawing a public outcry that led the police department to abruptly return Digidog to its maker.

The Democrat reaction was typical and expected.

Democrat U.S. Rep. Jamaal Bowman said in April of the NYPD robo-dogs: “This is some Robocop stuff, this is crazy.”

Bowman was one of several New York politicians to speak out after a viral video showed the robot trotting along with police officers responding to a domestic violence report at a public housing building in Manhattan.

soooo what will a robot dog do to stop the illegals???? Bite them? Piss on them? or just be another cost “UN_EFFECTIVE BS measure from the Buffoon andd the socialist/Marxist party.

Biden is a damn idiot and so is Harris. So is, the allegedly, 81+ million that voted for his sorry ass, if you believe there are that many idiots that really voted for him?

Close the borders for good! Get rid of Biden and demos!

LISTEN UP….Without BORDER SECURITY You got ALL Kinds of CRIMINALS Crossing OVER and TAINTED DRUGS. GOD’S Blessing is NOT with BIDEN. ACTIONS Speak LOUDER than WORDS. From SamuraiQueen. 😄😄😄😇😇😇

Hope the criminals go after the brain dead pres and vice pres.