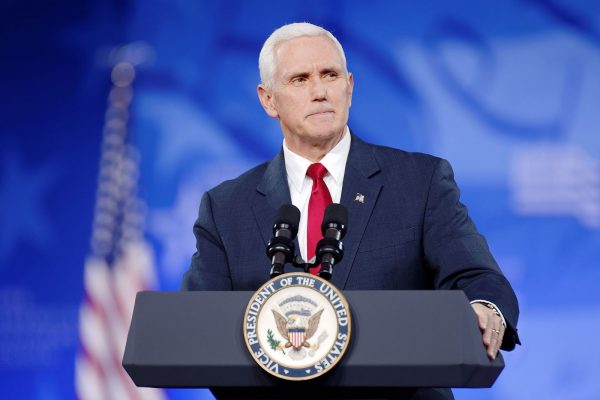 Washington, D.C. – The United States Supreme Court is scheduled this week to take up two cases critical to the survival of President Joe Biden’s executive orders mandating, separately, that businesses that employ more than 100 people and healthcare workers all be vaccinated against the novel coronavirus commonly called COVID-19.

Advancing American Freedom, an organization founded by former Vice President Mike Pence, announced Monday it had filed an amicus brief opposing the vaccine mandate and in support of the petitioners’ requests for a stay.


In its amicus, AAF argues that OSHA’s vaccine mandate published as an “Emergency Temporary Standard” is a means to “shortcut normal rule-making requirements” established by Congress and should be stayed in order “to prevent the irreparable harm to Americans, to jobs, to constitutional governance, and to our cherished freedoms.”

The mandates are a thorny issue, pitting the individual’s freedom of choice against the government’s responsibility as regards the general welfare of the American people.  Most observers expect the court to rule against the Biden mandates but only because that’s what the tea leaves say a conservative court should do.

Most other conservative commentators seem to be siding with Pence. Comments published Monday by highly regarded author Andrew McCarthy – a former chief assistant U.S. attorney – on the National Review website, echoed some of the points the former vice president made.

“Very simply, Biden is in violation of the Constitution. We have a republic, not a monarchy, and there is nothing inherent in the executive power conferred by Article II that authorizes the Biden decrees. So, the president lacks even arguable authority to coerce people into being vaccinated absent statutory authorization. Indeed, I must say “arguable” because it is doubtful that even Congress itself has power to force private citizens to submit to an invasive medical procedure, much less to delegate that authority to the executive branch,” McCarthy wrote.

The Biden workplace mandate is scheduled to take effect soon, affecting as many as 84 million working Americans. Last Thursday the administration asked the Court to leave the mandates intact because they were essential to helping public health officials contend with the continued number of COVID-19 cases still spreading across the United States.

I heard about and I’ve made such great money.KJH It’s really user friendly and I’m just so happy that I found out about it. The potential with this is endless.
Here’s what I do… 𝐆𝐨𝐨𝐠𝐥𝐞𝐩𝐚𝐲𝐬𝟎𝟏.𝐓𝐤

I think the American people should have the right to choose and not to be forced into something that they don’t want. Fauci has lied to the people of this country long enough
He should be kicked out and even prosecuted

prosecuted and hung for many crimes including killing people both with the covid vaccine and and AZT and i beleiev at least on other drug but maybe more. He is owned by big pharma.

Here is the argument and it is backed by much better DR.s and much better researchers than fauci (he is a quack) and the FDA, CDC, WHO are liars and not true researchers. These organizations are paid off, corrupt, hacks that can’t tell the truth because of the big pharma money. Fauci has already done much harm and killed many aids people with his backing of AZT and big pharma got a big pay day (as I am sure fauci did too, one way or another) and whth these covid vaccines Fauci is still showing big pharma he will stand behind these really corrupt businesses and push their poison. This is also a big attempt at control and possibly population control because china and fauci (along with many politicians from many countries and all thanks to big money and china) I know who the enimeies are why doesn’t the supreme court, or maybe they do and that money has gotten to them.