Does America Still Have the Reserves of Reason and Maturity to Defeat the Chaos That Looms? 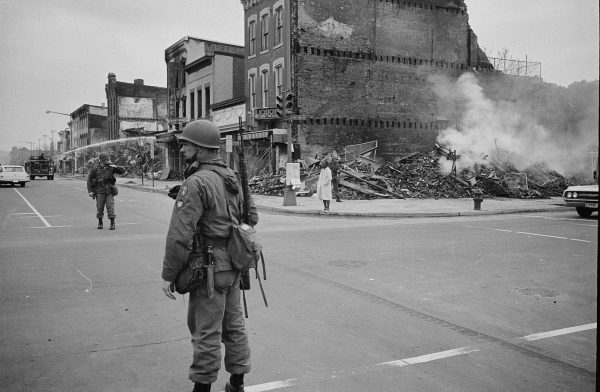 The violent upheavals we have witnessed over the past three weeks in cities across America, coupled with the clamoring for “racial justice,” has elicited comparisons with events in the late 1960s and early 1970s. Similarities exist certainly, but our country is a far different place than it was 52 years ago. Where we wind up when the dust settles after the votes are cast on November 3rd, will be far different from where we found ourselves on Wednesday, November 6, 1968, or, four years later the day after Richard Nixon was reelected.

The violence in America in 1968 and continuing for several years thereafter, was precipitated initially by opposition to the war in Vietnam but was seriously exacerbated by domestic events, notably the assassinations of Martin Luther King, Jr. and Robert Kennedy that Spring and Summer. King’s assassination in particular provided the other catalyst for the wave of violence – racial tension.

Today, while there is no discernible relationship between U.S. foreign policy and the turmoil rocking cities from Seattle to Atlanta, there clearly is a strong underpinning of racial animosity; more so than was the case a half-century ago.

Another common element between the political upheavals evident in these two eras is deep-seated personal animosity toward a national leader – Richard Nixon in 1968 and 1972, and Donald Trump today.

In that first election, Nixon tapped into a profound sense of unease among middle-class voters, focused first on the antiwar demonstrations and later the violence following King’s assassination. In declaring himself the “law and order” candidate running against an entrenched establishment Democrat — Hubert Humphrey — who appeared to be baffled by the extent of that voter unease, Nixon opened a wellspring of support that carried him all the way through to his reelection four years later.

President Trump cannot be credited with “discovering” that undercurrent of unease – Nixon beat him to it 52 years ago. Perhaps even more than did his predecessor, however, Trump understands the timeliness and importance of the phenomenon, and he has masterfully calculated how to use it to his electoral advantage.

One could delve deeply, if not endlessly, into numerous statistical factors comparing voting in 1968 and 1972 with 2016 and 2020 – education levels, racial voting patterns, voting age, and the list goes on. Bearing in mind the truism that statistics are notoriously malleable, however, such analysis yields little of value in trying to understand how the current climate of extreme social unrest will affect this November’s election.

The only exception, perhaps, to not becoming bogged down in dueling statistics, might be to consider the substantial “gender gap” – currently at 20% – Trump suffers when matched against Joe Biden, his all-but-certain Democrat rival. Nixon did not face such a “gap”; in fact, it was not until the 1980 election that a discernible “gender gap” began to appear in presidential contests.

Statistics aside, our society truly is at a crossroads.

The current political climate contains the very real possibility, if not the likelihood, of recurrent urban violence at least through the November election. Voters in 1968 and 1972 faced similar threats, and not surprisingly responded positively to Nixon’s “law and order” campaign on both occasions. His victories were facilitated by virtue of the fact that his Democrat opponents, especially George McGovern in 1972, were perceived as weak in dealing with domestic violence.

Historically, American voters have responded positively to candidates who convey strength in the face of domestic or international turbulence. While Biden does not yet personify the profound weakness McGovern displayed in 1972, the ambivalence he continues to exhibit is similar to that by Humphrey when he campaigned against Nixon in 1968 (and lost).

Thankfully for our country in both those cycles, and ever since, there has been a reserve of reason and maturity sufficient to push back successfully against the forces of chaos that tested us.

However, never before in our history have so many political leaders and citizens shown themselves willing to accept, if not encourage violence and chaos in order to defeat one individual, as we now are witnessing. If they are able to defeat Trump in November, the violence and chaos we have seen so far this summer will be but a harbinger of things to come.

The dumbocraps need to declared a terrorist organization. As enemy combatants, they can LEGALLY BE DISSOLVED

The answer is NO ,Nada ,absolutely not !! The NCAA threatens the Colleges in Mississippi with sanctions because of their flag ,a woman loses her job over her support of step-son ,Sul Ross statue is attacked by college QB for what-ever reason and it gains traction ,kneel & dis the Flag & National Anthem and is promoted by the NFL and players (protest if you must but do it on your own time and not when you are being paid to perform )owner of fast food franchise :”white people need to shine the shoes of Black people as penance for something that happened long ago .>riots and lawless actions are justified , and so much more AND THERE IS NO ACTION FROM THE LEADERSHIP OR THE PEOPLE TO OPPOSE THESE EVENTS .i WONDER WHEN THEY MAKE A PLAY FOR THE CHRISTIAN CROSS AND STAR OF DAVID TO BE TORN DOWN IF THESE PEOPLE WILL STILL BE TEXTING OR WONDERING WHAT IS HAPPENING ?? MUSLIM CHILDREN CAN ATTEND PRAYER TIMES AT SCHOOL BUT NO CHRISTIANS OR JEWISH AND THAT IS OK.! MY OPENING REMARK /ANSWER IS “HELL NO” > WE HAVE LOST THE WILL TO DEFEND OUR WAY OF LIFE AND WE ARE DOOMED TO SUFFER THE CONSEQUENCES / GOD BLESS AMERICA =WE REALLY NEED IT !!!

Why is the DNC attempting to defund the police, is the question that should be asked. They do not intend on eliminating police, they intend to eliminate police they do not trust, since all too many of them are conservative.

Ergo, the police are racist, since they are conservatives for the most part, hence racist. Which they are never going to admit, but that is the long and short of it, the smart money is on the DNC creating their Gestapo.

This is about taking the nation to one party hegemony and fascist rule by fiat, do you think the DNC do not like law and order, because you can bet as soon as they get their way its lockdown, the Coronavirus should have taught us that. They also do not mind violence which is what they have been doing since the 12th of never.

Its them or us, choose wisely, its time they be leveled, so that we can go on with our lives free of the misery they heap upon us, expecting us to pay for their lavish lifestyles and politics of envy, hate, greed and constant misery, while they treat with bitter and strident hatred at every turn.

Its time the DNC be obliterated, that is if you want a peaceful life, we cannot have both…