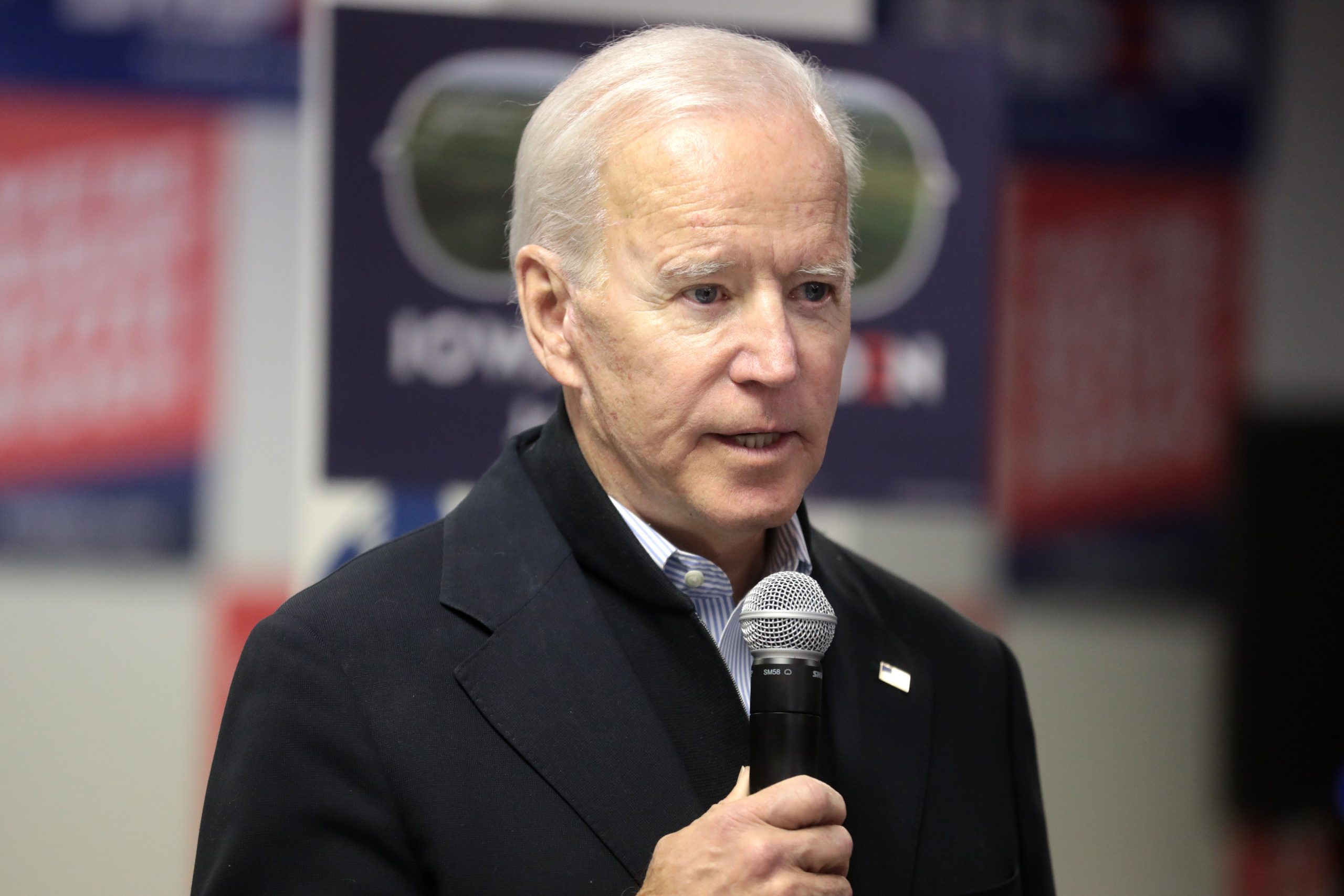 Here are the leading issues dragging Biden under:

The myriad of scandals stemming from Joe’s ne’er-do-well son Hunter is like a weight chained to his father’s campaign.

While parents cannot be held responsible for their adult children’s behavior, the elder Biden can because he outright enables it!

From the single mother in Arkansas that is still waiting for Hunter’s child support payments to his drug addiction that’s gone untreated thanks to his famous last name to the Burisma scandal involving a fortune that Hunter acquired only because he represented easy access to his father – the details may change, but the bullet points remain the same.

The scandals reek of everything voters despise about Washington. They are attack ad gold and are sure to be increasingly prevalent as Election Day approaches.

The Trump economy has done consistently well, far outpacing the Obama economy. This was noted most recently in February’s robust jobs report. Although panic overwhelmed the stock market last week, the White House is working overtime to alleviate its impact.

While no one likes a panic, the history of the stock market is littered with them. None of this news implies more ominous signs are on the horizon. And if you’re an investor Barron’s has some advice:

“Hiding in the market’s most conservative names was a nice idea three weeks ago, but it isn’t the best idea today,” David Donabedian, CIBC U.S. private wealth chief investment officer, tells Barron’s. “Just focus on good business fundamentals”—and don’t switch to names with the lowest beta or price/earnings ratio. (Beta measures a stock’s underlying volatility and correlation with the market.)

The constant gaffes coming from Biden are weighing him down like cement shoes. While some are trying to compare his gaffes to Trump’s rhetoric there are big differences. Trump talks like a New York real estate mogul because he was one, whereas Biden is slipping up constantly and exploding at voters he needs to win.

Here is a sampling of Biden quotes compiled by Newsweek that have dinged his presidential ambitions:

“This election year, the choice is clear. One man stands to deliver change we desperately need. A man I’m proud to call my friend. A man who will be the next president of the United States—Barack America!”

“You cannot go to a 7-11 or a Dunkin’ Donuts unless you have a slight Indian accent. I’m not joking.”

“When the stock market crashed, Franklin D. Roosevelt got on the television and didn’t just talk about the, you know, the princes of greed.”

Joe Biden recently hired the former campaign manager for Beto (Robert) O’Rourke. Despite the mainstream media anointing Beto as the next Kennedy, his 2020 campaign quickly devolved into an unmitigated disaster. He suspended his campaign more than two months before the Iowa caucuses. Despite portraying himself as a moderate, Beto is a radical (especially on guns and illegal immigration) who hired radicals to run his campaign. This hiring decision makes no sense given the objectives of every single presidential campaign in a general election.

The fact that the most popular living politician among Democrats didn’t endorse Biden in the primary hurt his campaign to the point of nearly giving the nomination to Bernie Sanders. As the primary heads to an anti-climatic end, any Obama endorsement would now look obligatory, even perfunctory.

Bernie Sanders and his supporters weighed Hillary Clinton down in 2016. They could drag Joe Biden down in 2020.

Sanders is still in the race and does not intend on stopping anytime soon, giving him plenty of time to weaken Biden’s campaign from the left flank before he has to fight Trump.

It is also no secret that Senator Sanders’ supporters are on the far-left of the Democratic Party. It is also no secret that they have a “Bernie or Bust” mentality. A sizable percentage of these voters will only show up for Bernie Sanders on Election Day, especially considering the DNC disenfranchised them when the party establishment actively undermined Sanders in 2016.

Moderate voters in the Democratic Party are becoming disillusioned by the party due to its candidates lurching further and further left in the last generation. Independent voters have also found themselves in a pickle with the party due to the attempted impeachment of President Trump. Without these voting blocks, Joe Biden will have to turn out virtually every low-propensity Democratic-leaning voter to win.

They are setting you up for a Obama & Hitler-y run at the white house. This thing we have been watching was a put on show. There are some very important people who are going to be brought up on treason charges.They will be done away with if they don`t win next time. We are still in danger of losing this country.

Fact is, Democrats do not have a viable candidate to run in November. No one who knows what they’re doing wants Sanders the Communist or Joe Biden the skanky godfather to an international criminal cartel. We have but one chance to save America: President Donald Trump.

Dennis I agree you are absolutely right the deep state are really working on setting things up, I live in Montana and our governor is a yes man for obummer and we have a wonderful senator who is up for re-election and after Schumer made a trip here, talked to our governor and all at once he decided to run for senator, the others backed off and he raised over a million dollars his first week, not from Montana, WHAT A SET UP SAVE MONTANA AND AMERICA VOTE RED

Gerry
Reply to  Dennis B Anderson

Sadly Dennis — you could be absolutely right !!!!! Only the leeches in this country will vote for the lunatic sanders thinking they actually will get something for nothing(big surprise coming their way) and I can’t think of any reason at all to vote for the gropin old man who is as corrupt as obama and the witch clinton.

I said that from the beginning, that Biden is the puppet, to be used by the party. If they get him to the convention he can name Hillary as his VP and if elected he will be ushered out and Hillary can be President. Thats their strategy. It will fail because BIDEN IS AN IDIOT

Backing in is the only way that corrupt
bitch would get in. Vote for Trump in 2020
in force….and stop their game of collusion
and election rigging.
The best the DemonRATS have is Tulsi
Gabbard and they have screwed her over.
If the DemonRATS weren’t
VOTE TRUMP 20⁸so corrupt she
would have been allowed to campaign..
but that doesn’t fit their agenda of stealing
the election.
VOTE TRUMP 2020…END THE CORRUPTION.

Dan
Reply to  Dennis B Anderson

Can you offer details Dennis?

They left out an important fact about Hunter; He was also
receiving money from some Chinese source .

Plus Sleepy joe has got to be the Dumbest person to ever run for President. he makes AOC look like she actually went to school and learned something

He is the most dangerous to run this is a set up for killary, Biden has dementia and is completely controllable, THINK ABOUT IT SAVE AMERICA VOTE RED

Biden’ gaffes are no longer gaffes, but serious delusional statements indicative of a moderate mental/cognition decline. He’s not tip toeing the line into Dementia, he’s calf deep into stage 2 Dementia. Anyone with any experience around Dementia, is asking themselves whether or not Biden can still dress himself. Add in the changing increased aggression and severe red flags are waving.

Sadly, correct, but Biden has just won enough delegates
…to shut out his DNC competition. On to, November.

Hillary knows she doesn’t have a chance to be elected president so, she’ll more likely, run as vp and the rest is predictable.

OR AT BEST vp AND CALL ALL THE SHOTS CUZ JOE IS SO FAR GONE!
THEN SHE CAN HAVE HIM DECLARED UNFIT AND TAKE OVER! GOD HELP US ALL! SHE IS EVIL TO THE CORE!

You all seem to for get about big mike the trannie, and biden has said he wants a black woman, and he is so far gone that big mike may be the woman of his choice, and when he is kicked out then mike can take over and in come killery as a consolation prize but ol’ bath house barry will still be the one behind the curtain running things.

Biden could win every delegate and he does not have the smartness to compete against Trump in a debate. He would wet his pants fumbling to figure out whether he’s a candidate for Senator or President. That’s if he can figure out what state he’s in. Gooooo Donald.

I believe Obama withheld his endorsement because he, more than anyone else, knows how far gone Biden has slipped from sanity. Are any of the betting parlors giving odds on whether Biden will even make it to Election Day?

Those are not gaffes – they are a big problem, and the Democrat establishment knows it.
Watch who they pick for a VP; Kerry, Clinton, or worse.

Guys and Gals, The mental health issue with Biden were clearly explained by Fox News Dr. Marc Siegal, weeks ago! He had 2 brain aneurysms back in 1977, and the surgeries required had to cut thru his skull and 2 years later a far less invasive procedure was implemented. Dr. Siegal said that long term studies showed the procedure available to Sleepy Creepy old Joe ARE dementia and forgetfulness in later life!!! Not even a question why this is going on, and Joe was out of the Senate 6 months in one revovery. Not his or the Dr’s fault!!! But Now NOT Presidential Timber. Plus he was on the wrong side of History on most all Foreign Affairs opinions and actions!