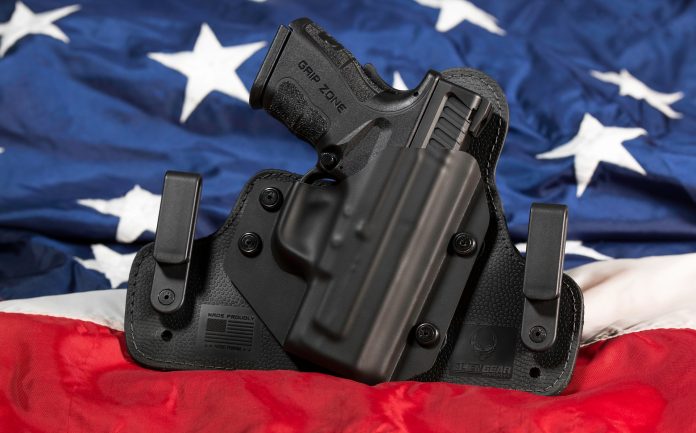 Opponents of private firearms ownership are always looking for ways to keep people from buying, possessing or using firearms for legitimate purposes. They refuse to acknowledge the rights protected by the Second Amendment of the Constitution which was included in the Bill of Rights by America’s founders to prohibit the new government they were creating from “infringing” on the pre-existing right of people to protect themselves, their communities and their families from those who would deprive them of their freedom.

When Hurricane Katrina in 2005 devastated New Orleans, the Mayor sent police house to house to confiscate firearms from law-abiding citizens even as marauding gangs were looting the city. They were stopped only after gun owners got a federal court to put a stop to the practice.

It’s happening again in the wake of the coronavirus pandemic and not just in New Orleans. Anti-gun politicians across the country are using the pandemic to advance their anti-Second Amendment agenda in new and sometimes imaginative ways. New Orleans is suspending gun sales. New Jersey has said they will no longer process firearms transfers through the federal National Instant Check System which makes them, in effect, illegal and other states are closing gun stores as “non-essential.”

Colorado, a center of “progressivism” in the mountains has, at the state level at least, refused to shut down firearms sales, but the Mayor of Denver announced this week that while he considers liquor stores and marijuana retailers “essential” enterprises exempt from the shutdown I effect there, firearms retailers do not qualify for the exemption as “essential.”

All of this is happening in jurisdictions where police are instructed to ease up on law enforcement and prisoners are being released from jails and prisons. Citizens who can no longer rely at all on the police for protection in these jurisdictions are now being told they have no right to legally obtain the firearms they want and need to protect themselves, their homes and their families. Such protection goes to the core of the Second Amendment especially at a time when law enforcement is often consciously AWOL.

These efforts will continue and increase as the shutdown continues. Liberals are appalled at the fact that since the pandemic began firearms sales have been increasing as more and more Americans are deciding that if they aren’t prepared to protect their families, no one will.

The National Rifle Association has just launched a new website designed to keep firearms owners and Second Amendment supporters apprised of these new threats to the Second Amendment. It’s to be found at www.nraila.org/coronavirus and those concerned about their rights in these challenging times would be wise to keep up with how the gun control community is working to take advantage of a crisis to enact new restrictions on those rights.

David A. Keene
David Keene has been at the center of conservative politics for decades. He is a former Chairman of the Young Americans for Freedom and the American Conservative Union and has served as the elected President of the National Rifle Association. He worked as a campaign consultant, lobbyist and commentator. His writing has appeared in Human Events, National Review and many other conservative publications and remains Editor at Large for The Washington Times after more than four years as the paper’s Opinion Editor.
Share
Facebook
Twitter

NEW YORK — As a Manhattanite currently on Day 17 of COVID-19- inspired self-quarantine/lockdown, I heard a sad ring of truth in Joel Kotkin’s latest article. “The...
Read more
Military

Captain of COVID-19-Stricken US Aircraft Carrier – Hero or Danger?

After his letter to superiors in Washington DC, pleading for help for his COVID-19-stricken ship was leaked, the captain of the Nimitz class nuclear-powered...
Read more