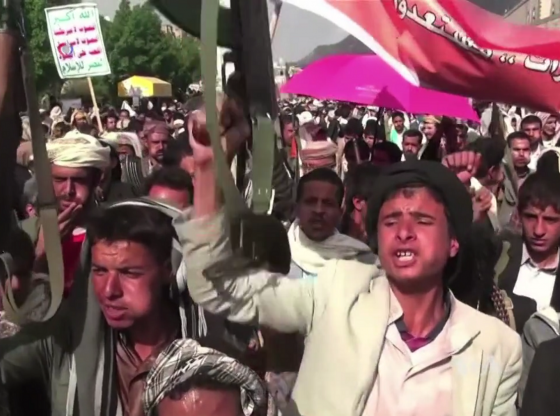 As Biden-Harris desperately continues to appease Iran and get it to return to the failed Obama-Biden 2015 nuclear deal, Iran responds with even more militia attacks against the United States and its allies. Recently Iranian backed militants attempted to assassinate Iraq’s prime minister, and now Iranian-back Houthi terrorists have stormed the U.S. embassy facility in Sana’a, Yemen.

In the first attack, President Biden avoided blaming Iran, in this attack Team Biden is also ignoring the Iranian connection.


Ironically, in February, Team Biden removed the Houthis from its foreign terrorist watch list and announced the end of U.S. support for the Saudi-led coalition’s offensive operations, pledging diplomatic efforts instead. It then named diplomat Timothy Lenderking as special envoy to Yemen.

There were no Americans at the compound when it was breached since the American ambassador and key staff were relocated to Saudi Arabia in 2015. However, local Yemeni U.S. embassy staff remained, and many were taken hostage.

According to the Washington Free Beacon:

A group of Houthi rebels reportedly stormed the U.S. compound on Wednesday seeking “large quantities of equipment and materials,” according to regional reports translated by the Middle East Media Research Institute [MEMRI]. The raid comes just five days after the Houthis kidnapped Yemeni nationals who work for the U.S. embassy.

The Free Beacon continued by reporting that:

The State Department confirmed to the Free Beacon that the Yemeni staffers are being detained without explanation and that the Iran-backed militants stole property after breaching the American facility in Sana’a, which housed U.S. embassy staff prior to the suspension of operations there in 2015.

“The United States has been unceasing in its diplomatic efforts to secure their release,” a State Department spokesman told the Free Beacon. “The majority of the detained have been released, but the Houthis continue to detain additional Yemeni employees of the embassy.”

Those still being held are “detained without explanation and we call for their immediate release,” the State Department spokesman said.

Among those who were kidnapped and held by the Houthis include a former embassy employee, an economic officer, and a U.S. Agency for International Development employee, according to MEMRI.

A State Department spokesperson said: “We call on the Houthis to immediately vacate it and return all seized property,” the spokesman said. “The U.S. government will continue its diplomatic efforts to secure the release of our staff and the vacating of our compound, including through our international partners.”

Why am I not hearing this on the MSM?

You must know why…because Comrade Biden and the Brandon Progressive Socialist regime have suppressed it. Czechoslovakia 1946… look up the history.

Another biden failure, gee, what a surprise.

So much for Biden diplomacy!!! Put an idiot in charge, and stupid things happen!!!

you got that one right.

Biden disgraces himself on a daily basis.