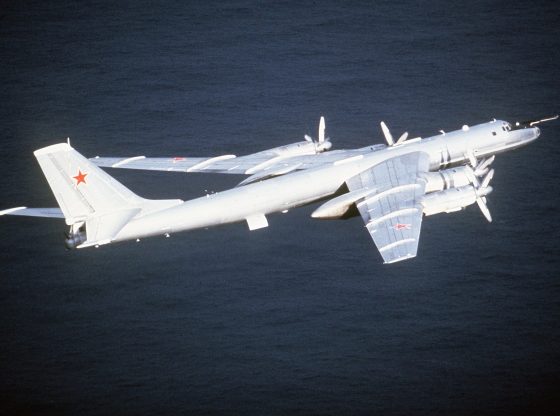 It appears that soon after China appeared to test new U.S. President Joe Biden by launching 28 military aircraft into Taiwan’s Air Defense Identification Zone (ADIZ) between Saturday and Sunday, Russia did the same thing in Alaska on Monday. In a tweet, the North American Aerospace Command (NORAD) announced that it had detected and tracked two Russian Tu-142 “Bear” maritime reconnaissance and anti-submarine warfare aircraft crossing into the Alaska ADIZ on Monday night.

NORAD is the joint U.S.-Canadian military command created during the Cold War tasked with detecting and defending against air and space threats to both nations.

While it is not uncommon for Russian aircraft to fly near the Alaskan coast, since Alaska is only 55 miles from Russia at its closest point, this appears to be the first incursion of Alaska’s ADIZ since Biden took office last week. NORAD stated that the Russian aircraft “remained in int’l airspace and did not enter U.S. or Canadian sovereign airspace.” NORAD used U.S. and Canadian flags in its tweet.

It is important to note that an air defense identification zone is airspace over land or water used to identify, locate, and control  aircraft for national security purposes. ADIZs often extend beyond a country’s territory to give it more time to respond to possibly hostile aircraft.

Crossing an ADIZ, while provocative, is not the same as penetrating U.S. airspace.

Nevertheless, as with China harassing Taiwan, these incursions coming only days after the new president’s inauguration are certainly perceived as tests of the new administration. In this case NORAD did not specify what actions it took to counter the Russian incursion, or if any was needed.

Many prior Russian aircraft incursions triggered a U.S. and/or Canadian response. As noted in in American Military News:

In October, NORAD F-22 fighter jets intercepted four more Russian Tu-142 aircraft near Alaska. NORAD captured photos of the intercept mission, while the Russian Ministry of Defense obtained video recorded by its own pilots of the U.S. fighter jets performing their close intercepts.

The fact that no interceptions were noted this time may mean that none were needed because the Russian planes only entered the ADIZ briefly. But there may be other reasons. However, in a later press release on Monday, NORAD did emphasize that it:

…employs a layered defense network of satellites, ground-based radars, airborne radar and fighter aircraft to track and identify aircraft and determine the appropriate response. This deliberate identification and monitoring of aircraft entering a U.S. or Canadian ADIZ demonstrates how NORAD executes its continuous aerospace warning and aerospace control missions for the United States and Canada.