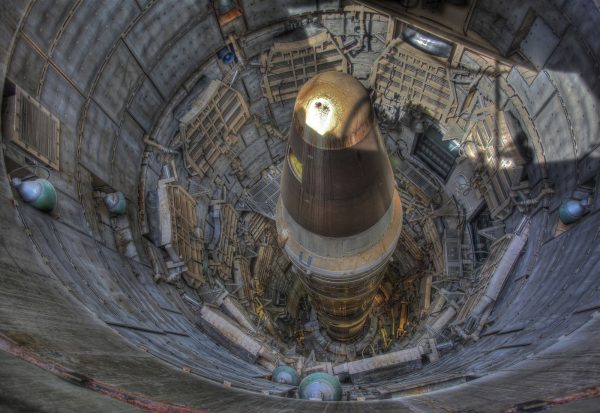 The Trump administration is taking a hard line with China and Russia over their nuclear weapons buildups. As both superpowers modernize and increase their nuclear weapons stockpiles, the U.S. Permanent Representative to the Conference on Disarmament, Ambassador Robert A. Wood, has just laid down the gauntlet.

According to an interview with CBS News, Woods said: “We’re not going to allow Russia and China to continue to move forward on their modernizations and increasing the stockpiles of nuclear weapons…This is something that the president said cannot continue.”

Woods explained to CBS News, “In the last 10 years, the U.S. has been trying to reduce the role of nuclear weapons in its overall national security strategy. China and Russia have gone in the opposite direction.”

China is in a massive nuclear weapons buildup. It is growing its ballistic missile submarine fleet, developing road-mobile ICBMs, new tactical nuclear weapons, and hypersonic weapons. In line with what I noted in an earlier piece, Ambassador Wood told CBS News that “China’s overall nuclear stockpile is going to double over the next 10 years. That of course is a great concern.”

Wood added that “right now, we are modernizing our stockpile. But we are not increasing the number in any substantial way. And we are having to deal with and respond to these growing challenges from Russia and China. And we cannot turn a blind eye to this.”

Arms control talks with Russia, and perhaps China, are planned for June 22nd in Vienna. China’s glaring absence from international nuclear arms control agreements has become a focal point of the Trump administration. Wood said the arms control team is “laser focused” on bringing both Russia and China into a new framework agreement.

When asked if the U.S. would increase and modernize its nuclear weapons forces if China and Russia don’t fall into line, Woods responded by saying, “with Russia and China moving in this different trajectory than we have been moving, we have to do what’s in our national interest and not only in our interest but in the interest of our allies and partners.”

That sounds like a diplomatic way of saying that if China and Russia don’t maintain or reduce their nuclear weapons stockpiles, the US can be expected to respond in kind by increasing the size and capabilities of its nuclear forces.  Let the negotiations begin.

It’s a price all of us should be willing to pay for being right.

Send a complaint to [email protected] and tell them to ban these two people who are always putting these comments where it’s not appropriate.

Hide and watch. Putin will be pulling for Hillary so she can use another RESET button. I am sure he would pay several million to the Clinton Foundation for such actions.
REAL RUSSIAN EFFORTS.
hEY, WHAT if Biden picks Hillary for his VP. He would be dead SO QUICK.

Love it: disarm downsize Russia & China or we Nuke up & weve got better sensors, targetting then you do unless some spy stole Tech for CCP China missile systems.

Send a complaint to [email protected] and tell them to ban these two people who are always putting these comments where it’s not appropriate.

with so many Nukes NO ONE will win

The term was coined years ago…and is still very appropriate..M.A.D. ( Mutually Assured Destruction) We are all between a rock and a hard place. The globalist/communists and the ideology that caters to the Art of Deception are making their move…and the West is crumbling from within, having been infiltrated by the competing entities and Christians, Hindus, Buddhists and conservative elements are in their “cross hairs”…add the “nuclear” touch and if the former do not complete the plunge into the next Dark Age that is picking up steam the latter will endow us with a nuclear winter…

With very fast mach 8+ Hyper sonic missiles, a first strike is doable!
With orbital nukes in a southern polar orbit, an EMP attack is doable!

The only EMP defense is to destroy all North Korean, Russian, Communist Chinese satellites that have been in orbit for many years and now Iran just this year! That has not happened.

Lets assume a EMP strike will disable land based ELF communications to US based silo based ICBM’s.

The U.S. Navy currently has 18 Ohio-class submarines deployed, of which 14 are ballistic missile submarines (SSBNs), and armed with 24 Trident II SLBMs each, for a total of 288 Trident II missiles equipped with 1,152 MIRV nuclear warheads.

Only a retaliation from our ICBM submarines AFTERWARDS give our many enemies any real pause. So, how crazy are they now?

Now I am sure that Trump is so great that he could control either of the countries. Both have played Trump like an old fiddle and will keep on playing him as long as he is in office. Either country knows thwy have to let Trump do something to flatter him and just let his Narcissist personality do the rest.
It takes hard negotations to do anything and none of Trump’s appointees have that experience, they only have to agree with Trump to get a top level position in his administration, experience not necessary.

And the saddest thing is that Trump is President, or would a Clinton presidency be worse?

Obama was the worst, Clinton second