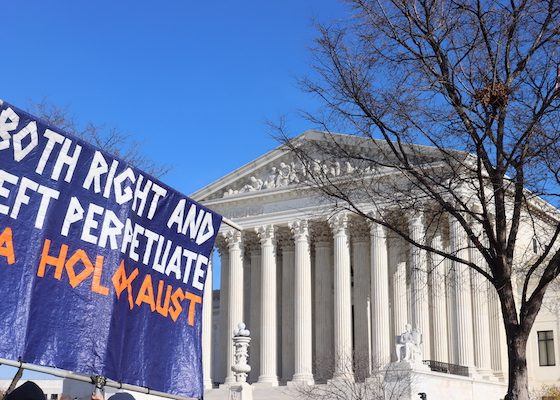 ANALYSIS – Even as Democrats and the left continue obsessing over the 4-hour-long January 6′ insurrection,’ far-left radicals continue to escalate their growing months-long insurrection against the Supreme Court.

Sadly with no response from Team Biden or Twitter.


Now ShutDownDC, a radical leftist organization, or a “liberal advocacy group” as Axios calls them, is Tweeting that it is paying up to $250 bounties to service industry workers in the District for every sighting of the conservative justices who overturned Roe v. Wade.

DC Service Industry Workers… If you see Kavanaugh, Alito, Thomas, Gorsuch, Coney Barrett or Roberts DM us with the details!

We’ll venmo you $50 for a confirmed sighting and $200 if they’re still there 30 mins after your message. https://t.co/xXWZ5JZiE7

This comes just days after Justice Brett Kavanaugh was forced to leave a restaurant in D.C. after aggressive abortion rights protesters showed up outside.

More dangerously, this also follows the attempted assassination of Justice Kavanaugh last month when a heavily armed man was arrested near the Justice’s home with the intent to kill Kavanaugh.

The Department of Homeland Security has warned that there could be a potential surge in political violence once the Court ruling was handed down.

While Biden’s DHS soft-pedaled the source of the violence, the threat is expected primarily from far-left pro-abortion radicals.

Meanwhile, regarding the current targeting of Justices, according to Axios:

What they’re saying: “D.C. Service Industry Workers … If you see Kavanaugh, Alito, Thomas, Gorsuch, Coney Barrett or Roberts DM us with the details!,” ShutDownDC said in a tweet.

Team Biden should be taking a forceful stand against this growing insurrection against the Supreme Court. Instead, it is enabling and inciting it with this reckless rhetoric.

Just yesterday, Biden called the Court “out of control” and its decision “terrible, extreme.”

Expect more targeting and violence against the Supreme Court as the Democrat incitement, and the leftist insurrection grows. ADN

Bounties should be put on the mobs harassing the judges

Is there any doubt now about who the violent radicals are?