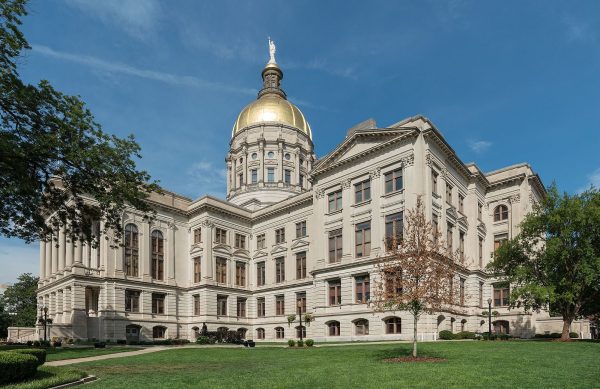 On Friday, Attorney General Merrick Garland announced the Department of Justice is suing Georgia over its new voting law passed in March.

“Today, the Department of Justice is suing the state of Georgia,” Garland said. “Our complaint alleges that recent changes to Georgia’s election laws were enacted with the purpose of denying or abridging the right of black Georgians to vote on account of their race or color, in violation of Section 2 of the Voting Rights Act.”

The Georgia law, passed in March along party lines in the span of just a few hours, imposes restrictions that voting rights groups say will fall most heavily on minorities: It sets new voter ID requirements for absentee ballots, limits drop boxes and even bars passing out food and water to those waiting in line to vote.

In a speech earlier this month Garland pointed to 14 “new laws that make it harder to vote,” vowing to scrutinize “current laws and practices in order to determine whether they discriminate against Black voters and other voters of color.”

Georgia Republicans argued the law was needed to protect voter integrity. Its swift passage into law followed a loss by former President Trump in the state, followed by claims of election fraud from Trump along with a call from him to Georgia’s Secretary of State asking him to “find” the president votes.

The lawsuit is being overseen by Kristen Clarke, the head of the Justice Department’s Civil Rights Division, and Vanita Gupta, the associate attorney general, both longtime civil rights lawyers.

Trump slammed the development in a statement from his Save America PAC:

“Biden’s Department of Justice just announced that they are suing the Great State of Georgia over its Election Integrity Act. Actually, it should be the other way around! The PEOPLE of Georgia should SUE the State, and their elected officials, for running a CORRUPT AND RIGGED 2020 PRESIDENTIAL ELECTION—and for trying to suppress the VOTE of the AMERICAN PEOPLE in Georgia,” Trump wrote. “If we don’t address these issues from the 2020 Election head on, and we allow the Radical Left Democrats to continue to politicize the DOJ and Law Enforcement, we will lose our Country. SAVE AMERICA!”

With this upside-down government, what would you expect? Truth, honesty, and integrity are foreign to these people.

Politicians used to hide their crooked ways. Not anymore

SCOTUS is all CATHOLIC. Have you ever heard of a CATHOLIC anything that was not corrupt? Vote Accordingly.

Those cowards are NOMINAL “catholics” that LIE for the father of lies.

You CANNOT be a proabort & faithful Catholic!!

So, please quit the prejudice & see that, Mother Angelica, who founded EWTN, for example is a faithful Catholic. Thanks

Please dont lump all human beings the same. Biden may have been born Catholic but he was a freemason, as are most of these evil people. he left Gods laws long ago on the ladder to wealth and Pedophilia. There are many good Catholics who wouldn’t hurt a fly! Same with Pelosi and Newsome, Cuomo brothers and others who quickly learnt that money talks. Their God is money

Just remember that now the SCOTUS is all CATHOLIC. Have you ever heard of a CATHOLIC anything that was not corrupt? Vote Accordingly.

LISTEN UP…The JUSTICE DEPT Can A LL JUMP into a LAKE With CROCODILES. THEY are CORRUPT. CROC Says….I am So HUNGRY…..I Could CRY. From SamuraiQueen. 😄😄😄

Pelosi is CATHOLIC. Newsome is CATHOLIC.  SCOTUS is all CATHOLIC. Have you ever heard of a CATHOLIC anything that was not corrupt? Vote Accordingly.

What about Feinstein, Zuckerberg, Zucker, Schumer, Nadler, Epsteins? All supposed to be Jews but they are not! Zionists infiltrated the Jewish faith long ago including the evil Rothchild’s. The false Pope was put there by Soros. Another fake Jew

What do you expect? The SCOTUS is all CATOLIC… FBI is CATHOLIC, Have you ever seen anything CATHOLIC that was not corrupt. CA, NY, everything south of the USA!