‘Megaphone Marine’ Speaks Out About Lockdowns in California 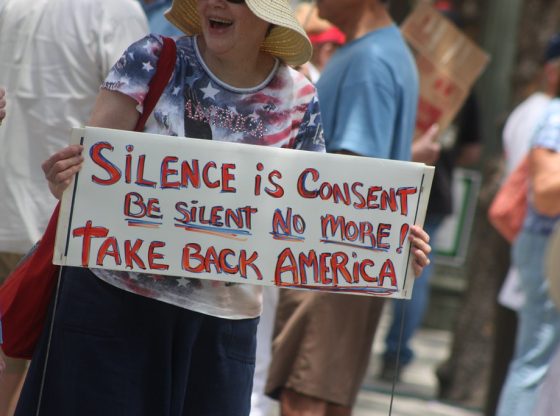 Dr. Cordie Williams, also known as the “Megaphone Marine” is protesting the harsh lockdowns happening in California. In May, Cordie took to the California State Capitol, yelled in his megaphone, and let other anti-lockdown warriors know what he thought of the situation. The clip gained over 15 million views on social media:

“In the face of tyranny, in the face of freedom, are you going to sit there in your riot gear against peaceful protesters?” asked Williams in an overture to police officers approaching the peaceful demonstrators. “Or are you going to say, ‘you know what, it’s time to stand up for my country, because I took an oath of office and it said, ‘I will defend against all enemies, foreign and domestic.’”

Williams created a non-profit 1776 Forever Free, where he teaches fellow patriots how to maximize the power of their voice.

In the clip above, Cordie breaks down what took him to the moment when he finally had enough.

Watch the full interview below:

See What Portland’s ‘Mostly Peaceful’ Protesters Are Doing Now
Where Are the Lockdowns Headed in 2021?

It’s about time! They want to run us over and into the ground! This is a handful of filthy rich _ _ _ holes throughout the world that wants to ruin our country! Our country is the last one to ruin because they have destroyed all of the other countries out there!

The UNITED STATES of AMERICA isn’t going to cave to socialism or communism because of a handful of rich and powerful (they think they are powerful because they think they can buy ANYTHING)!

I will stand up and fight!

I have been run over enough!

Because 300,000 people have died from a very complicated flu (virus) they’ve used that as an excuse to shut down our businesses!

Fight! This is a fight for our jobs, freedom, sanity, etc!

I stand with TRUMP because he fought against these SOCIALIST bastatds!!!!!!!!!!

More like 30,000. Keep getting reports of people shot and killed in auto accidents as ‘death by Covid19’

Keep fighting the good fight we’re with you….God bless you and yours!

I agree 100% with you! I stand with President Trump, and will fight with him to save our great country and constitution!!! The Dems and Rinos need to be brought down. There needs to be term limits in Congress. Lobbyists need to be terminated, so there is no more access to congress.
Patriots need to rise up and help take our country back now!🇺🇲

Time for freedom loving humanity to push back against the evil Globalists. Their aim is to destroy small Businesses. Covid is a convenience to them, brought out whenever needed!