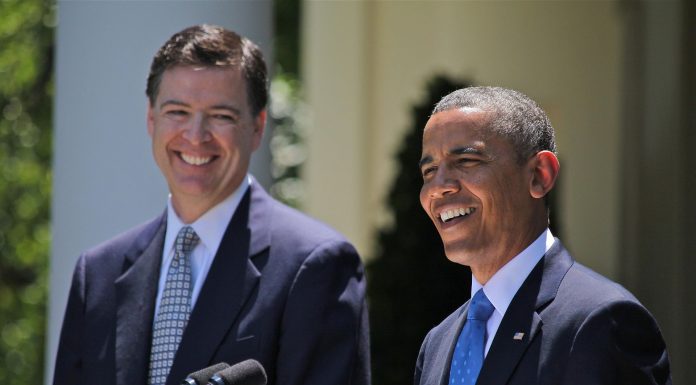 Advertisement
Confirm You're Registered to Vote for Trump [ACT NOW]

A newly declassified email between then Obama National Security Advisor Susan Rice and James Comey has now revealed the true depth of the plot against Michael Flynn.

Then-FBI Director James Comey suggested that President Barack Obama might want to keep information about Russia from incoming national security adviser Michael Flynn in January 2017, according to a newly declassified email that Flynn’s predecessor Susan Rice sent to herself the day President Trump was sworn into office.

The Rice email was declassified by acting Director of National Intelligence Richard Grenell and sent to the Justice Department. Fox News obtained a copy of the email from the office of Sen. Ron Johnson (R-Wis.).

In the declassified email, which Rice sent to herself on Jan. 20, 2017, she documented a Jan. 5 meeting she took part in with Obama, then-Vice President Biden, Comey and Deputy Attorney General Sally Yates regarding Flynn…

Rice alleges that Obama then asked if Comey was saying that the NSC should not pass sensitive information to Flynn relating to Russia, to which Comey replied “potentially.”

As more and more information regarding the many acts of double dealing and deception undertaken by James Comey and others involved in the Michael Flynn debacle continue to be made public things look worse and worse for the Obama administration.

Advertisement
Confirm You're Registered to Vote for Trump [ACT NOW]

Over the weekend, Dr. Jo Jorgensen secured the Libertarian Party’s nomination for President with 51% on the party’s final ballot. Jorgensen, 63, is a lecturer...
Read more
Politics

David A. Keene - May 27, 2020 0
The reopening of the US economy has begun. People are going back to work, small businesses are reopening and economists and politicos alike are...

The Five Best States for Gun Rights Amid Coronavirus

WATCH: Democrats Ignore Hypocrisy When Attempting to Out-Communist Each Other