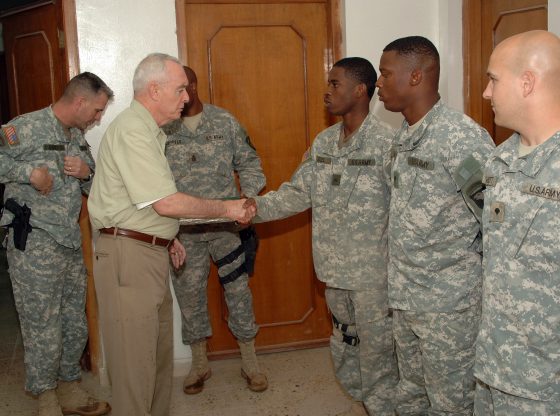 By This file was contributed to Wikimedia Commons by National Archives at Colle
| Matthew Williams | Politics | 6
Advertisement
HELP! Take Back Our School and Save Our Children From Liberal Indoctrination [ACT NOW!]

Retired Four-Star General and MSNBC contributor Barry McCaffrey was humiliated on Monday after he was caught sharing a video that he claimed was of Ukrainian air defenses downing Russian jets but in reality turned out to be footage from a video game.

A retired four-star general and MSNBC military analyst is getting clobbered on social media after tweeting out footage he claimed showed Ukrainian forces downing a Russian plane, but turned out to be from a video game.

The tweet posted by retired Gen. Barry McCaffrey showed grainy footage of a surface-to-air missile downing a plane. McCaffrey initially called it an example of the “formidable” Ukrainian air defense, but took down the tweet after being relentlessly mocked.

Twitter users were quick to point out that it should have been obvious the footage was not real.

The incident is just the latest in an continuing flood of misinformation and propaganda being spread as the war in Ukraine continues to unfold.

But the WOKEian Borg will still consider McCaffery and expert and likely never even mention it on MSLSD.

MSNBC excoriated (by all other media) for not checking sources, um, yet again.

Retired Four-Star General and MSNBC contributor Barry McCaffrey, as of this afternoon, is embarrassed and is no longer an MSNBC contributor, he will now be spending more time with his family.

Noone with an IQ is going to show up on MSLSD! All their “celebrities” are dunces who are racist and unscientific. They don’t know basic biology or other sciences.