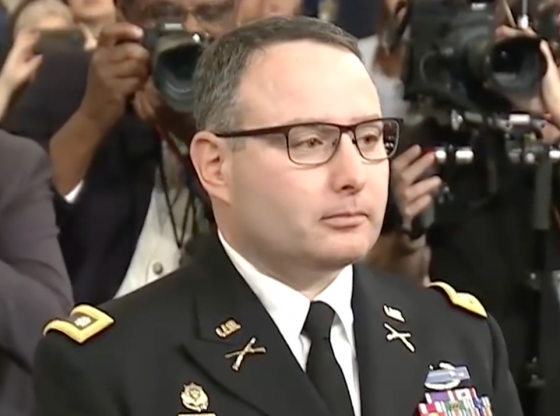 An unvaccinated U.S. Army officer has been found guilty of defying COVID-19 compliance orders at Aberdeen Proving Ground, in a conviction won by a notorious figure in the Deep State plot against former President Donald Trump.

“1st Lt. Mark Bashaw was found guilty of refusing an order to telework and reporting to his office without submitting to a COVID-19 test or otherwise furnishing a negative test result,” the Military Times reports. He was also charged with refusing to wear a mask.

“Proud of the prosecution team at Aberdeen Proving Ground. Secured a first in the nation conviction at court-martial of a lieutenant who failed to obey lawful orders re COVID mitigation measures. Guilty on all 3 counts. #orderanddiscipline,” Vindman chirped on Twitter.

Proud of the prosecution team at Aberdeen Proving Ground. Secured a first in the nation conviction at court-martial of a lieutenant who failed to obey lawful orders re COVID mitigation measures. Guilty on all 3 counts. #orderanddiscipline

Yevgeny remained with the Army and Judge Advocate Generals Corps, but is outspoken in his liberal beliefs.

In addition to celebrating his COVID vaccine conviction, Vindman has also used his Twitter account to promote his brother’s book attacking Trump, and to accuse Fox News host Tucker Carlson of being a Russian agent, which could be a federal crime.

The judge in Basham’s trial, while finding him guilty, did not apply any punishment.  It is not clear if Basham will remain enlisted, and guilty verdits in military court martials can effect eligibility for private sector employment.

“The service has kicked out 426 active duty troops for refusing to receive the mandated COVID-19 vaccine, and 3,381 have received official reprimands. Roughly 5,000 exemption requests await adjudication,” the Military Times reports.

This needs to stop! CV is not even a thing anymore!

Won’t it be nice when REAL AMERICANS take back their country? I do not think Biden and his haters will make it to 2024.

First 1st Lt. Mark Bashaw, as a member of the U.S. Army, is in the service to protect and serve Americans–and this means to protect other his fellow Americans from life-threatening viruses as well as going to the battlefields overseas. The fact that Bashaw only thought of himself/his opinions and failed in his duty to protect other Americans from Covid is worthy of any punishment the Army doles out to him.

If you were paying attention you would know that these vaccine requirements are unconstitutional and at the very least unnecessary by any standard. It is well documented at this point by the CDC itself that all the vaccines do is (hopefully) keep you from getting as sick as you might otherwise. I say hopefully because there have been people who were fully vaccinated with multiple boosters who have died after contracting COVID. There have also been multiple deaths and permanent injuries from the vaccines themselves. Fully vaccinated and boostered people can still get COVID and can still spread COVID. I’m still waiting to hear a logical reason for mandating these vaccines and for punishing people who refuse to get them.

Unless he has a medical or religious reason for not taking the shot. Then he should have taken it, it’s what he signed up for, or resign his commission. You don’t have the right to say which orders you will follow.