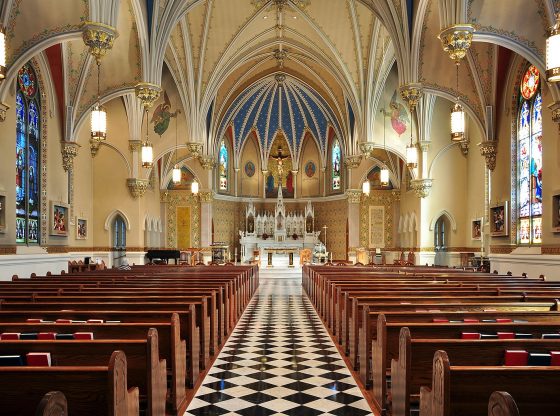 In the wake of the Supreme Court leak, Catholics are bearing the brunt of leftist madness.

Vandals branded a Catholic Church in Colorado with the words “My Body My Choice” in large white lettering. So far, the Governor has said nothing. There are other examples of graffiti and attacks, but the worst is yet to come.


The pro-abortion group “Ruth Sent Us” posted this to rile up supporters into action.

Whether you’re a “Catholic for Choice”, ex-Catholic, of other or no faith, recognize that six extremist Catholics set out to overturn Roe. Stand at or in a local Catholic Church Sun May 8. #WarOnWomen #MothersDayStrike pic.twitter.com/v2vtpd12Gp

They are calling for protests in Catholic Churches everywhere. Protestors are wearing costumes meant to evoke imagery from the story “A Handmaid’s Tale” in order to indicate that they are facing severe oppression. The last time we saw widespread movements sparked in a similar manner, the year was 2020. I’m sure we all remember that well.

Not in my Catholic church.
We will rise and take you on!

Oh…I think I remember you. “alf”! How is everything in Kindergarden? Got enough needles?

Democrats just want to scrape their babies out into the garage.
They’re ignorant, after all they’re Democrats.

Garbage? They have parts an voters to sell.

Actually, Democrats want to make sure that babies that are born can get the best care and are not viewed as a burden. However, if this cannot happen because a pregnant woman has no financial support, steadily employed partner, or way of raising a kid, it is less of a detriment to taxpayers to end the pregnancy and get pregnant later when she has a career and has the financial wherewithal to bring up a child properly. It is not right to bring someone into the world when the world they would be brought into is one of poverty and neglect.

This cavalier attitude toward human life will get us all in trouble. Not even, “It’s my body,” stands up to scientific scrutiny. And God certainly doesn’t sanction the taking of innocent human life.

A woman with no financial support, no partner, or way of raising a child should not have engaged in intercourse. Very simple!!

What is F J Bidet doing? TREASON. F J Bidet is CATHOLIC. F j Bidet was on the select committee for the SCOTUS for 20 years. Now, because of that, the SCOTUS is all CATHOLIC TRAITORS.
Pelosi, CATHOLIC TRAITOR, proudly crowed in 1018 that there were more than 60 million ILLEGAL ALIEN CATHOLIC INVADERS in the USA.
Now over a million every year are being ‘welcomed’ by all the CATHOLIC TRAITORS in congress.
Vote for ANY CATHOLIC and you vote to destroy the USA and a traitor.

It’s mostly the “catholic democrat kid from Scranton” and his heathen, evil followers that are doing all the killing.

Scumbags like Pelosi, Biden, et.al., are no more Catholic than I am! I support the Catholic Church, but I am a Baptist, who find people like the aforementioned, repulsively illiterate.

Joey came up with “The Pope said he was a good Catholic.” This was said because the U.S. Bishops were having a meeting and they could have excommunicate him. (and they should have along with pelooooozi and kerry—-when are the Bishops going to do their job with all of the phony Cathlics who vote for abortion bills). The statement could not be verified by the Vatican.

Wait a minute here. I am Catholic and I detest in the strongest terms the vile garbage that these protestors are promoting. These politicians that claim to be Catholic only do so because it helps their image and gets them votes. The rank and file Catholic detests these imposters. And, frankly, I welcome the protestors to my parish so that they can attempt to desecrate the Eucharist. That way we can find out how fast their fat asses are bounced out into the parking lot. Count on it. This time, next time and EVERY time.