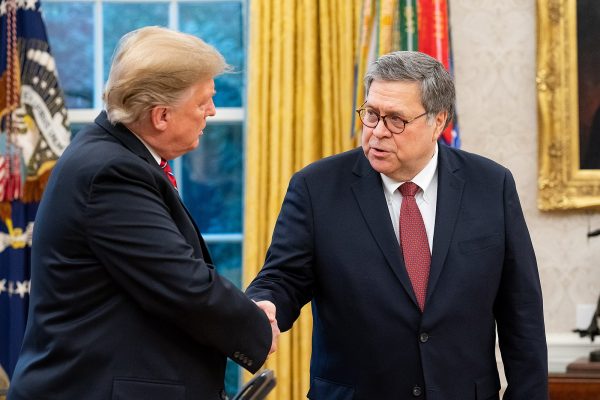 The United States Department of Justice via Wikimedia Commons
| Matthew Williams | Politics | 44
HELP! Take Back Our Schools and Save Our Children From Liberal Indoctrination [ACT NOW!]

“This was far more consequential than that,” Barr declared. “All the media platforms and the mainstream media essentially agreeing to keep this out of the news and keep the American people ignorant of business deals.  Putting aside the issue of whether there was criminality — I’m not addressing that, but propriety, ethics, cashing in on the office. Potentially giving grounds for blackmail and so forth, of course the American people were entitled to know about that before the election.”

“And they said, ‘Well, it’s just disinformation,’” Kilmeade remarked. “What about the 51 intel experts, from Michael Hayden, who served in a Republican administration, to Leon Panetta, some guy that comes off as somewhat balanced, former Republican, former CIA director, to Mike Morell, all saying this is classic Russian disinformation. You never believed that. And why would 51 people, many very respected, put their name on a letter like that?”

“Because they’re political whores,” Barr said bluntly. “And it was wrong for them even to put out a letter because they didn’t know the facts. They had zero information; they did it as a political ploy to help Biden win the election.”

Was Barr right to call out the 51 current and former intel officials over their claims of ‘disinformation’ on the Hunter Biden laptop story? Let us know what you think in the comments below.

HELP! Take Back Our Schools and Save Our Children From Liberal Indoctrination [ACT NOW!]

I am Glad some of this Garbage is coming out it’s been well overdue. Just another example of the unelected bureaucratic making a decision that affects our very lives.

Thanks a lot, Bill. Why didn’t you say so at the time? Who are you sucking up to now?

Because they weren’t sure at the time. Unfortunately Republicans investigate correctly, never leak any facts until they are absolutely sure and aren’t concerned with the Media whining. It definitely costs us law and order Patriots but if we become them, we are no better than them.

will
Reply to  Thomsen

Yes, but what is his real motive? Selling books, or true regret that he suddenly realized after seeing his country sinking, that he sabotaged the greatest President in US History who could have avoided all thf curent suffering and loss of Global Respect and power. I think he is just a petty FOOL who had his feelings hurt and took it out on President Trump, Now, he is realizing that it was not the right thing to do. {If we really believe he has a conscious]