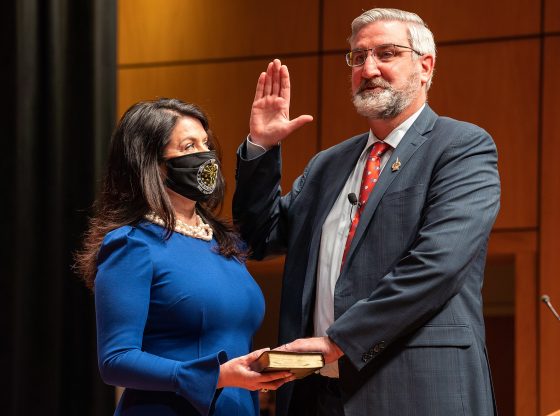 The Republican Governor of Indiana, Eric Holcomb, has now decided to veto a bill put forward by members of his own party which would protect female athletes from having to compete against transgendered competition.

The bill would have prevented transgender girls from participating on girls sports teams at public schools for grades K-12.

Had it been signed into law, the bill also would have allowed for a civil action suit to be brought against a school or institution subject to it if such an entity violated its provisions, according to the text of the bill.

“First, as to process, the wide-open nature of the grievance provisions in HEA 1041 that apply to all K-12 schools in Indiana makes it unclear about how consistency and fairness will be maintained for parents and students across different counties and school districts,” Holcomb wrote in a letter to Speaker of the House Todd Huston. “Student-athletes could be treated differently according to which school they attend and compete for. Frustration of students, parents and administrators will likely follow.”

Holcomb’s veto can technically be overridden by a simple majority vote from the legislature, which is set to meet and settle the matter on May 24th.

Biden Supreme Court Pick Admits to Defending Child Pornographers During Senate Questioning
What are the ‘Switchblade’ Suicide Drones US is Now Sending to Ukraine?

What a sicko, transgenders are not & will never be women. You people need more mental meds

Absolutely Jildo! And more folks like us have to quit supporting “main stream” media outlets and STOP voting the Democratic ticket!

Translation: ” What I really mean is that I’m scared out of my skull that if I sign this legislation into law some bunch of liberal fairies will get their panties in a wad and say oh boo hoo to me!”