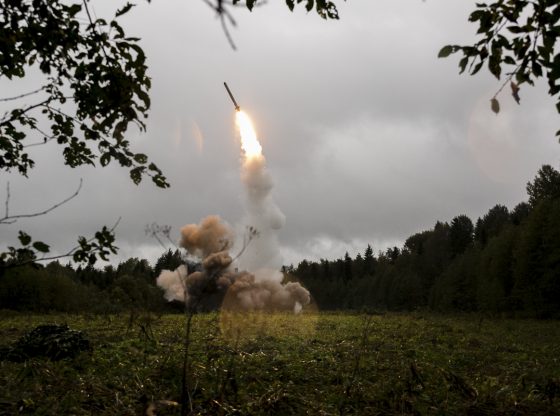 
Russia has reportedly used hypersonic missiles in combat against Ukraine last week, marking the first known use of the new superweapons in combat by any military.

“US officials confirmed to CNN that Russia launched hypersonic missiles against Ukraine last week, the first known use of such missiles in combat,” CNN reported. “The launches were likely intended to test the weapons and send a message to the West about Russian capabilities.”

Hypersonic missiles travel at five times the speed of sound or faster, have lower trajectories than ballistic missiles, and can maneuver before hitting their intended target, which makes it hard to shoot them down.

Hypersonic missiles garnered a lot of attention late last year after China tested hypersonic weapons last July that were more advanced than anything that the U.S. is believed to have in its arsenal.

According to reports, the U.S. is far behind both Russia and China in hypersonic missile technology with a full version not expected to be in U.S. service until at least 2024.

LISTEN UP…PUTIN Needs to be ARRESTED for KILLING INNOCENT PEOPLE. THEIR BLOOD will be on HIS MONSTROUS HEAD. I will REJOICE the DAY the EVIL WORLD LEADERS are Brought to THEIR KNEES by the LORD GOD. Do NOT Forget what GOD Did in the LAND of EGYPT. From SamuraiQueen. 😄😄😄😇😇😇

So why all of a sudden are people worried about killing innocent people? The US has been doing that for years killing major country leaders etc and no one says a peep..

Russia’s not so secret weapon is the braindead pudding eating putz in chief Joe Biden!

Can we counter missiles?

Russia has had hypersonic intercontinental nuclear missiles for years that the US still has absolutely no defense against. They also have submarines off our coasts that can launch and detonate dirty bombs in a few seconds that would make the coasts uninhabitable for decades and/or take down our electric power grid permanently. If the electric grid goes down, all nuclear power plants would start melting down like Chernobyl within a few weeks. With the resulting destruction and collapse of law & order and the food supply, widespread cannibalism would start within 23 days. There is no defense and no contingency plan for any of this, except for the Washington Elites and the super-rich to move into and survive in their well stocked bunkers.