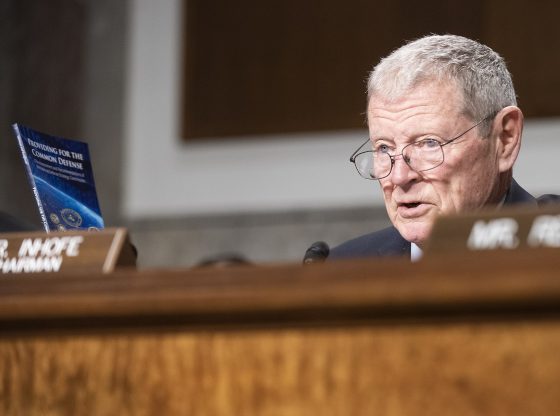 
United States Sen. Jim Inhofe, 87, will announce his resignation Monday from the body he’s served for 28 years, according to multiple reports.

First reported by the New York Times and now corroborated by multiple reporters, Inhofe’s resignation would be effective Dec. 30. It is expected that Inhofe’s seat would be filled through a special election to be held this year as part of the general election in November.

Reporter Jonathan Martin was the first to break the news about Inhofe’s expected resignation Thursday afternoon:

Hearing that @JimInhofe – the 87-year-old Oklahoma senator first elected in 1994 – may resign in the next few days. Would trigger an intense campaign among Repubs in a red state where Senate seats don’t come along too often.

Inhofe has served in the Senate since 1994 his retirement would set up a fierce contest to succeed him.

REPORT: US Officials Believe Ukrainian Capitol of Kiev Will Fall to Russia in a Matter of Days
All the Senators Showing ‘Unwavering’ Support For Ukraine

He resigns, is it a health Issue, he may just be tired and wants to leave! But whatever is the reason, Senator James Inhofe has done our Country Well, he and his expertise will be missed. THANK YOU, JAMES INHOFE, FOR YOUR SERVICE TO THE UNITED STATES OF AMERICA!

OR he might be fed up with the decrepit Moron-in-Chief and all of his slimy toadies and partners in corruption.

Just curious – if Senator Inhofe did our country so well, then why did he, along with Romney, Graham, and Burr refuse to show up last week for the vote that would have permanently ended ANY COVID mandates by President Lyin Biden?

Man, I am happy I read one more down before flying off the handle on Jawad. I live in Oklahoma and sent him an email to find out. I am still waiting to hear from Inhofe about that exact question. He should have resigned last election.

God, given his age, he should. I don’t think anyone over 70 should be allowed to run for House or Senate.