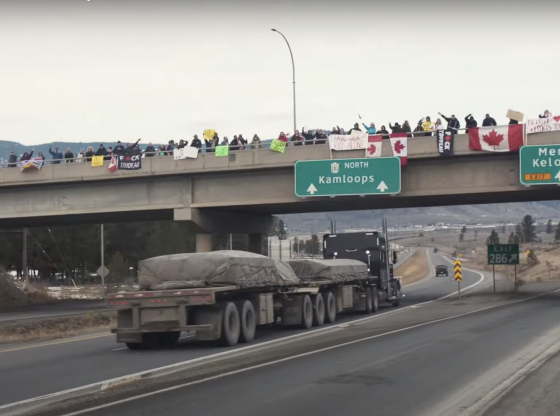 With the pandemic in full swing, Prime Minister Justin Trudeau urged Canadians to show support for those helping to keep food on their tables. “While many of us are working from home, there are others who aren’t able to do that — like the truck drivers who are working day and night to make sure our shelves are stocked. So when you can, please #ThankATrucker for everything they’re doing and help them however you can,” he tweeted March 31, 2020.

Trudeau had a chance to thank thousands of them personally over the weekend, as the truckers who’ve assembled what they call the Freedom Convoy to protest COVID vaccine mandates and restrictions cruised into the capital. Instead, he fled — breaking isolation to do it.

On Saturday, the Trudeaus moved from their official Ottawa residence to the classic “undisclosed location.” Dad had started a five-day isolation Wednesday after one of his kids tested COVID-positive — but security accompanied the first family as he fled.

While Justin was comfortably in hiding, thousands braved an extreme-cold warning to join the truck drivers who’d come to Parliament Hill from points east and west. Some say they won’t leave until lawmakers remove restrictions — or Trudeau resigns.

Only day before Trudeau was forced into hiding he had dismissed the then upcoming protests as a ‘small fringe minority.’

Three weeks from now you will wish you had JHg488H started today. Simply give it a shot on the accompanying site.

TRUDOUGH is a criminal buddy with the criminal obama

Justin is as stupid as biden and his father was. The Canadians got what they voted for, a nitwit, just like the usa.

Sorry Greta….Biden is a fraud administration and the truth of that will be apparent to EVERYONE….he is a meat puppet barely capable of uttering a complete sentence…his puppet masters will soon be replaced by the rightful President Trump…81 million votes? and you believe that? Biden couldn’t fill a garage, Trump fills stadiums…still believe it? No one with a functioning brain actually believes Biden won. As for the Canadians who voted for Trudeau…wtf is wrong with you? I hardly believe he won either.

The USA did not vote in Prizzie Bidet . Corruption ,cheating and illegals “voted for the IOTUs and is not a POTUS , I would say he cheated but that would be lying because his dementia prevents him from thinking clearly . he follows a set of orders from no one knows and I think not even him . he is the IOTUS AKA– { Idiot Of The United States )