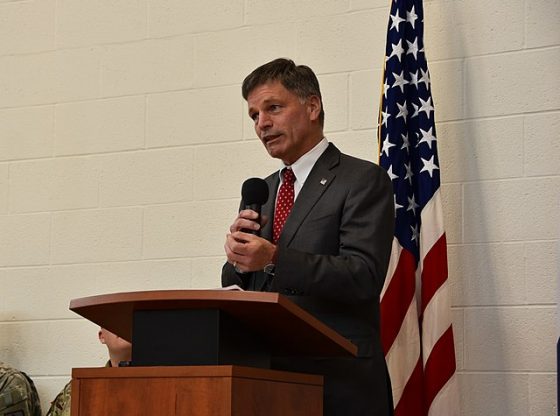 The Jim Bridger power plant’s Unit 2 was scheduled to close Jan. 1 after the EPA declared it violated environmental standards, but Gordon has ordered the plant to keep burning coal for another four months, pointing out the Biden-controlled EPA refuses to honor a plan approved under the Trump administration.


“In a letter to U.S. Environmental Protection Agency (EPA) Administrator Michael Regan, Gordon said his order is necessary because of the agency’s ‘failure to act’ on a revised State Implementation Plan (SIP) that was submitted by the state,” The Washington Examiner reports.

“The governor’s office alleges the revised SIP was approved in 2020 to allow the unit to continue operating while still meeting regional haze guidelines, but the EPA later ‘reversed course and refused to honor the prior approval,’” the Examiner reports.

“The Clean Air Act gives the Governor authority to issue this temporary suspension order to keep Unit 2 operating and prevent job losses that would occur at the plant and the mine,” Gordon’s office points out.s

“I cannot let DC’s failure put Wyoming folks out of work and lead to a loss of energy availability for Wyoming consumers from a coal fired unit,” said Gordon. “We had a deal. PacifiCorp, EPA and Wyoming all agreed in 2020 that the regional haze guidelines would not only be met, but exceeded with the revised SIP.”

“Now, with that deal unilaterally abandoned by EPA, this emergency order is necessary to protect Wyoming workers from EPA’s recklessness,” said Gordon.

In a November statement, Gordon slammed the Biden administration for a scheme that “needlessly and recklessly imperils the employment of many Wyoming workers, threatens electricity consumers with increased energy costs, threatens to undermine the reliability of the nation’s electricity grid, undermines the integrity of the regional haze program and EPA itself.”

Gordon pointed out Biden’s reversal “damages our cooperative relationship, and actually does greater harm to the environment — and for what, shallow talking points on the international stage?”

What, the fake Biden administration is trampling on states rights? Say it ain’t so! Obvious sarcasm in case you didn’t get it.

m b
Reply to  raylaser

Close down the EPA in 2023. Vote Republican in 2022. Wonder why everything is made in china when the EPA drove American energy and manufacturing out of business? The EPA bows to china!

ElmoColt45
Reply to  m b

Just look at the American companies that are in China now. And they have built 3 new coal burning power plants in the last 5 year! And the EPA, says SHUT YOUR POWER PLANT DOWN,