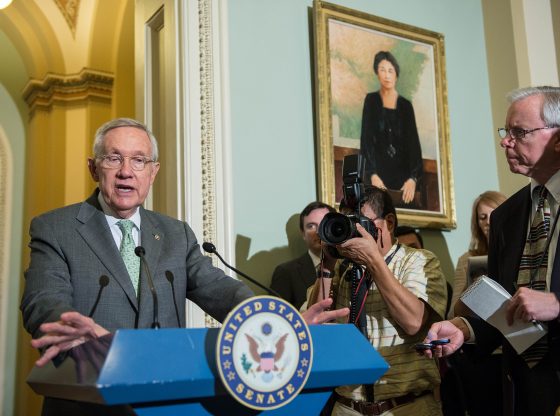 After a four year long battle with pancreatic cancer, former Democratic Senate Majority Leader Harry Reid died at the age of 82 on Tuesday.

Reid passed “peacefully” at his home in a Las Vegas suburb while surrounded by his friends, according to his wife of 62 years, Landra.


“Harry was a devout family man and deeply loyal friend,” she said in a statement. “We greatly appreciate the outpouring of support from so many over these past few years. We are especially grateful for the doctors and nurses that cared for him. Please know that meant the world to him.”

He was Nevada’s longest-serving member of Congress with a career that spanned 34 years, and saw him serve as Senate Majority Leader from 2007 to 2015. He retired from public service after an accident left him blind in one eye.

Reid was born in Searchlight, Nevada and lived in a cabin without indoor plumbing. His mother worked as a laundress in a brothel and he had to hitchhike 40 miles a day to attend high school. He supported himself through law school at George Washington University by working as a U.S. Capitol officer until he graduated in 1964.

He entered politics at 28, when he was elected as a member of the Nevada Assembly, and went on to become the state’s youngest Lieutenant governor in 1970. Reid became a U.S. congressman in 1982 and entered the Senate in 1986.

During his time as Senate Majority Leader, Reid launched the Advanced Aerospace Threat Identification Program to study UFOs in 2007, which he said was “one of the good things I did in my congressional service. I’ve done something that no one has done before.”

He rallied all 60 members of the Democratic majority Senate to support President Barack Obama’s Affordable Care Act in 2009. In 2013, he invoked the “nuclear option” to eliminate the 60-vote requirement to confirm judicial nominees in favor of a simple majority.

GOP leader Mitch McConnell told Reid at the time, “You’ll regret this, and you may regret this a lot sooner than you think.” The next year Republicans took control of the Senate and used the maneuver to confirm three of former president Donald Trump’s nominees.

“The nature of Harry’s and my jobs brought us into frequent and sometimes intense conflict over politics and policy,” McConnell said in a statement.

“But I never doubted that Harry was always doing what he earnestly, deeply felt was right for Nevada and our country. He will rightly go down in history as a crucial, pivotal figure in the development and history of his beloved home state.”

What a jerk, dies with all his corrupt secrets.

May God have mercy on his dark soul.

indeed, but I for one won’t miss either him or his dark totalitarian soul.