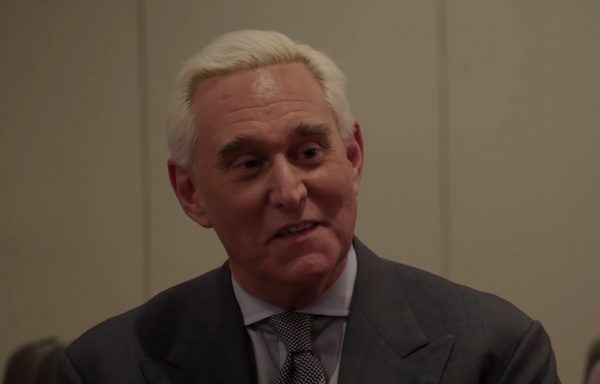 Former Trump ally Roger Stone vowed to split the Republican vote in the upcoming 2022 Florida gubernatorial race, unless incumbent Ron DeSantis makes a promise not to abandon his post to run for president in the 2024 election.

“I believe that Gov. DeSantis, assuming he’s going to run for re-election, should pledge to the people of Florida that he will fill out all four years of a second term,” Stone said in an interview. “What I don’t want to see is for him to be reelected and then immediately abandon Florida to run off and run for president, particularly if he’s running against Donald Trump.”

Stone would be in jail right now if it wasn’t for Trump. He was convicted of seven felonies for witness tampering, obstruction of justice, and making false statements to the FBI in 2019, but the former president commuted his sentence in July 2020.

He’s apparently paying it forward by putting the screws to DeSantis, who captured 21% of the 2021 CPAC straw poll vote of potential 2024 presidential candidates, trailing Trump, who garnered 55% support.

Possibly because without Trump on the ballot of the CPAC straw poll, DeSantis dominated with 43% of the vote, but losing the upcoming gubernatorial election would greatly diminish his chances of winning the presidency.

Stone doesn’t even care about winning, he has “no allusions about being elected governor,” just crushing DeSantis if he doesn’t fall in line. He said he would run as a third-party candidate to funnel votes away from the Republican vote.

“I just don’t think Florida should be a stepping stone to the president for any person,” Stone remarked. “I don’t think that I would have to get many votes to change the results of this race.”

Last week he gave a glimpse into what a campaign attack could look like when he demanded DeSantis order an audit of last year’s presidential election.

“If Florida governor Ron DeSantis does not order an audit of the 2020 election to expose the fact that there are over 1 million phantom voters on the Florida voter rolls in the Sunshine state I may be forced to seek the Libertarian Party nomination for governor Florida in 2022 #ByeRon,” he posted to social media.

Trump won Florida by 370,000 votes in 2020. DeSantis’ office said “Florida has already conducted both pre- and post-elections audits, and we are confident in the security and integrity of our 2020 election results,” in a statement.

Do you like DeSantis for President in 2024.
Trump does not.

As a Floridian, our Governor DeSantis has made it clear he is running for re-election in 2022. He stands with President Trump and will not run against him. Trump being Trump joked about DeSantis losing if he did run against him.

They are plenty of Republicans who who will be standing for reelection in 2022.
Most of them want to be President.
DeSantis thinks that he would make a better President than Trump.
Do you?

He will be a good President in 2028 election. He does not want to run in 2024. We need him to stay here in Florida until Biden is gone!

You said exactly what I was thinking. Sounds as though Stone hasn’t been in the loop too much. His statements sound like he is discombobulated from reality of late. DeSantis has made it clear he doesn’t have plans to run for the Presidency and is quite content to continue being Florida’s governor on numerous occasions.

Trump supporters and DeSantis-Floridians know Stone is out of touch at the moment and needs to catch up before making such ridiculous statements about DeSantis running against Trump. Trump isn’t worried about DeSantis and DeSantis isn’t worried about Trump. Both men are men of their words unlike the Rhinos we have in Congress and that is what makes both trustworthy and popular. Both men have stated where they stand on the issue of running against one another in public so Stone needs to back off.

But all these speculations are probably fake ones.

Stone is not speculating.
He operates on Trump’s orders.

Trump and DeSantis are friends. Trump knows that DeSantis wants to run for reelection as Governor of the great state of Florida!

Nobody is going to vote for stone…

The people who want Trump 2024 will vote for Stone.

You don’t want Trump 2024?
DeSantis wants DeSantis 2024.
For DeSantis to win in 2024 he must win in 2022.
Trump is a smart guy.
He knows how to crush his competition.
Goons like Stone.
Under Trump the Republican Party is a one man party.
That man’s name is Trump.

It is doubtful you live in FL; otherwise, you would have heard Gov Desantis say a number of times that he will NOT be seeking the Presidency in 2024. His wife was also recently diagnosed with cancer and they have 3 small children. That is where his focus is right now while people come up with all these wild speculations.

I have heard politicians lie about their political plans.
I have spent more time FL than any other State.
DeSantis’ wife has Cancer.
So he will campaigning for Governor.
In his last campaign he beat a weak opponent by 0.4 percent.
He will have to campaign hard.
Has he spoken to Newton Gingrich for tips on how to divorce a cancerous wife /

Exactly! I have heard him say he has zero plans to run for President.

If Stone announces for Governor you will .

No we will not because we know Gov DeSantis will not run for POTUS in 2024. From a Floridian and a Trump Supporter!

What will Gov DeSantis do if is Trump is “unable” to run in 2024.
Will he stick to his pledge?
He is a politician.

Trump will.
He knows DeSantis will throw him under the bus just as soon as he can.

I don’t think he would stand a chance against desantis.

He will if Trump gets behind him.
Trump is more worried about DeSantis in 2024 than Biden.

I thought Trump loved America, but this kind of crap indicates that Trump loves Trump.

I love Trump but believe he could do more for his country by getting behind true strong common sense patriots like DeSantis than running again himself. Sadly there are too many dense irrational people who can’t or won’t understand that what made him a great president was his policy decisions that helped EVERY American. What we need are more Ron DeSantis type politicians in every state and in congress.

You want to have Trump’s baby, that kind of love?
Please explain what made Trump a great President?
Reducing the National Debt?
Building a Great Big Beautiful Wall that completely seals us off from Poor Brown People?
Denuclearizing North Korea?
Bringing China to it’s knees over trade?
Denuclearizing Iran.
Pulling all Americans out of Afaganstian
There must be something else……

I like DeSantis. Trump as much as I respect needs to learn a little composure. The idea is for Stone to run in the final election and take votes away from DeSantis.

Trump needs to learn civility, some how.