Rep. Adam Kinzinger Announces That He Won’t be Seeking Re-Election 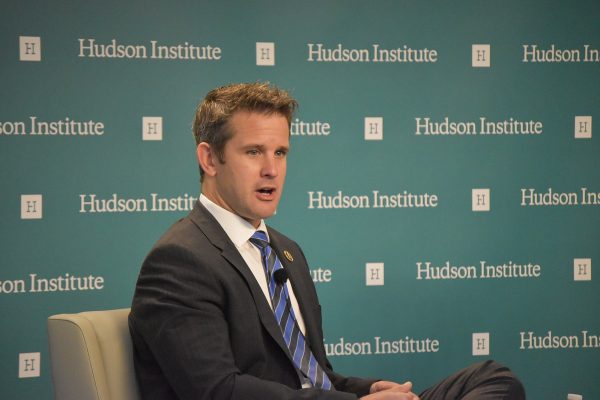 GOP Rep. Adam Kinzinger has now announced that he will not be seeking reelection in 2022.

Rep. Adam Kinzinger of Illinois, one of the most prominent critics of former President Donald Trump in the House Republican Conference, announced Friday he won’t seek reelection next year.

Kinzinger, one of 10 House Republicans to vote to impeach the then-president in January after the riot at the Capitol, is the second member of that group to say he will retire from Congress, joining Rep. Anthony Gonzalez of Ohio.

Kinzinger has long been an outspoken critic of former President Trump and joins a list of anti-Trump politicans who have decided to not seek reelection.

What choice does he have? His political career was over when he voted against the best president this country has had in decades. I used to think a lot of this congressman due to his military service,but now Im glad hes done.

John
Now the General public must have not thought that Trump was so good they actually took him out of office by a very wide majority. Now i am a a career Military person, who swore an oath to uphold the Constitution, exactly what Trump never did in any way, even violated the oath of office he took with his hand on a Bible, by violating so many laws, and telling more lies than any President in the history of this Country.

Therapy and medications may help your TDS! Please seek help.

No, not even therapy nor medications can help such stupidity…That kind of ignorance can only be help with a lobotomy but from what I can see from his comment I highly doubt that would even be eough to help such a wretched, soul.
Only Jesus’ love can open this guy’s eyes, ears, and heart to the truth.

Your comment on former President Trump had my head spinning. He never lied. In fact, he is the only President in modern history that kept his promises to the American people. Bush, Obama and now Biden, lied, and or misled, more then any in recent times.

The Biden regime is taking a wrecking ball, a demolition project to our country! My Father a WWII Vet always warned me about something like this happening, and here it is. The Great Satans, B&B Barack and Biden!!
He is also implementing the Cloward Piven Strategy!!

What are you using in place of a human brain? SFB’s? Biden violates US laws
every day as he is trying to undo everything Trump accomplished. How can
you make such a remark and not choke on your wordsy?

Can you list for me maybe 5 things he lied about? I keep hearing how much Trump lied and I do NOT recall any specific lies. Please enlighten me.

I agree Anita. What lies? The most transparent administration that has ever been since I’ve been alive and that’s 67 years. Promises made, promises kept! He scared the pants off of the communist left and destroyed the communist msm. The man is still FEARED today. And rightly so.

Sorry, but if you are a “career Military person”, then you are of the same mold as Milley. It absolutely amazes me that you accuse President Trump as being a liar, as your entire comment is FULL of lies. We call if “projection”. Plus, if you really are a military man, which I truly doubt, you would have been “fragged” if you had been anywhere near my bunker.

Don’t you mean “Mildew” as Milley?

What wide majority, this was the closest election in US history. Hope your kool-aid taste good.

I salute you for your service. However, you are still dumb as a rock.

uh huh, so specify examples of how he did not uphold the Constitution or of the many laws he violated. While you’re at it, what lies?, that have not already been debunked or had turned out to be truths>

You must be so “proud” of Biden’s Unilateral Surrender in Afghanistan, and his Open Borders Policy this fool called president is mandating. Yes I too am a Combat Veteran, Purple Heart Recipient, proud we a had a true Commander-in- Chief with President Trump!

I have doubts you were in anything even the cub scouts but I could be wrong. So les assume I am wrong, please tell me a lie or a law he broke. Let’s start with one so we can see where we are, I will be happy to give you a list of laws pedo joey (hell obama) broke. I di look forward to your reply but I know that will not come. Oh and the general public took Trump out or the dems cheating. I suggest you look at AZ forsinic audit and see the laws that the AZ election board broke.

I don’t think anyone has ever told more lies than Bill Clinton did and under oath at that!! Just because there are so many Trump haters does not mean he did not do good for this country. The economy was so much better until the Biden months tore that all to heck. I am paying way too much for groceries these days than I did during Trumps 4 years in office. And the illegals are coming in faster than America can handle. Who we will pay for too, by the way. Biden and his followers are idiots beyond compare.

Dear Robert Webster…you must be a DemonCrat lickspittle TROLL. R U?

Thanks 4 ur service but that may have been your problem being a career man!! I bet you think j McCain is a hero also. ( I 2 served honorably for 4 years in usmc)

Career military person? We’re you in the WACS?

You are a TRAITOR and SCUM. If you don’t change, you will Burn Down there.

Obviously, you haven’t been listening to Biden’s lies, nor his corrupt administration.

Funny guy…no joke man.. where you been the
Last 13yrs lol

Did you check out Bho,Jbiden,
I thank you for your Service,but you got lost somewhere in the MIX.
Better Retire

YOU ARE A DISGRACE TO THE U.S.A. & MILITARY ! WHICH MIILITARY , commie or islam ?

And don’t let the screen door hit ya on the way out Kinzinger! Good riddens.