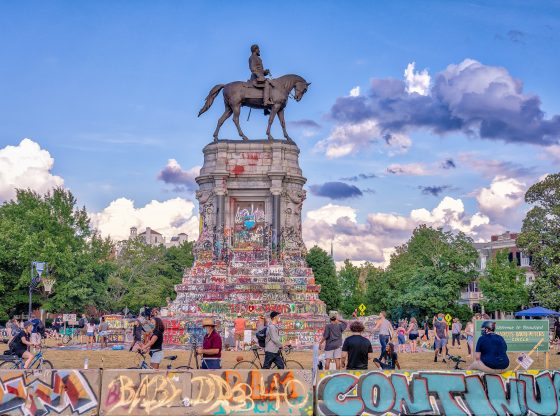 A massive monument to Confederate General Robert E Lee has been now been unceremoniously torn down in Richmond, VA after it became a target for far-left demonstrators during the 2020 George Floyd riots.


The largest Confederate monument display in the United States was removed from public view on Wednesday, over a year after Governor Ralph Northam (D-VA) called for its removal following the death of George Floyd.

The statue, a commemoration to confederate General Robert E. Lee, was unveiled in the 1890s in a field outside Richmond, Virginia. The 21-foot statue features Lee on horseback and sat atop a 40-foot granite base. The whole monument was six stories tall.

Governor Ralph Northan (D-VA) called for its removal last year, saying that we could “no longer honor a system that was based on the buying and selling of enslaved people,” according to Axios.

“After 133 years, the statue of Robert E. Lee has finally come down—the last Confederate statue on Monument Avenue, and the largest in the South,” said the governor. “The public monuments reflect the story we choose to tell about who we are as a people. It is time to display history as history, and use the public memorials to honor the full and inclusive truth of who we are today and in the future.”

According to Northam’s office the statue will be placed in secure storage until its ultimate fate is determined.

I’m sure that JFK would have enjoyed that interesting, unhinged, rant. Now go take your meds and relax. The men in the white coats will be there soon.

..And I’ll be happy to see those nice young men in their clean white coats....

CATHOLIC TRAITOR. Sidestep all the way!

You must be a CATHOLIC TRAITOR. Sidestep all the way!

Hey Alfie I see you are not a believer, I think you are a mindless syncopant who HATES religion, well I am a Catholic and I love GUNS, FREEDOM, and am a VETERAN which I believe you are NOT so blow it out your bunghole you are nothing but a HATER.

Thank you for your service.

Alfie, you are a sick person and your logic is all wrong !!!

You do the CATHOLIC sidestep well! insult, divert or divert then insult…NEVER a response.

Neither actually believe in anything the papists consider to be Church doctrine.

Catholicism remains the religion of convenience for Help-bound politicians because it requires no effort and you will NEVER be called out by ANY form of Church discipline.

I think they really still are Roman Catholics until they are officially excommunicated by someone in authority within the church. Someone said somewhere they are candy-store Catholics and pick and choose the flavor of the week when it comes to their choice as what is to be practiced and believed. I guess if you are a believer there will be a judgement day not by man but by a higher being.

Nah , Their Croco’s you know their like Rhinos only claiming to be Catholic

Biden is just one more CATHOLIC criminal. You are known for the company you keep. You also have to account for Al Capone, Hitler, Pelosi, The Bushes, AOC. Then there is the Mafia, Costa Nostra, MS-13 ANTIFA, Brown shirts of Hitler, and a host of other gangs. And add a third of all elected to the house and senate. You are known for the company you keep. If you associate with criminals, then that is what you are. Vote for ANY of the ‘south of the border’ folks and you will get the corruption, fraud, fixed elections, crime, ignorance, and failure forever that is the record of these folks
A hundred nations, a thousand years and exactly 100% FAILURE. Vote for ANY CATHOLIC and you vote for a traitor.

It is CATHOLIC “C” traitors v American patriots? I do not find Alfie “Patriotic” rather Alfie sounds more like a rabid nut. I have never ever seen or heard of a Catholic say be C or be dead. ?????
I do not believe for a minute that you as a so called patriot has served in any service, spoken as a true coward Alfie. Shoving all this drivel about what anyone as you see it do not serve with or have guns is drivel. Mad bruh? get back on your meds, dream that one day you can serve in the armed forces and then lets hear you.

Get some help Alfie

No statues means that slavery never happened. Can’t have it both ways. I never owned any slaves. Were any of you ever a slave? I doubt it. Never happened.

globalists and their demonrat criminal party continue to make us all slaves, the libby snow flake sheep volunteer to be their slaves while AMERICANS fight against slavery .

Communist countries do the same thing. Destroy history – we are under assault. This is another disgusting move by commie Northam. He loves killing babies after they are born! Absolutely horrific!

Ralph “Blackface” Northampton? You got to be f’ing kidding…how dumb can Virginia get? They seem to be wanting to out do themselves every time.

globalist puppet northampton must preach all globalist agendas or they won’t use their voter fraud to reappoint him .