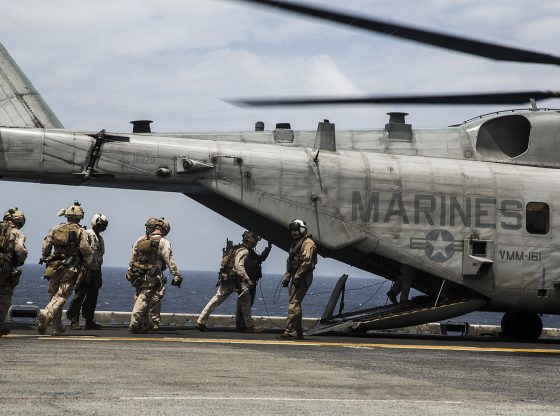 A battalion commander in the US Marine corps has now been relieved of his command after daring to defy President Joe Biden and his Generals over their disastrous withdrawal from Afghanistan.

A Marine Corps battalion commander said he was relieved of his duties Friday after he posted a video demanding “accountability” from senior leaders for failures in Afghanistan.

Lt. Col. Stuart Scheller went viral Thursday after he posted a four-minute, 45-second video to Facebook in which he appeared in uniform and ripped into military leadership following the devastating suicide bombing at Kabul airport, which killed 13 US service members and at least 169 Afghans.

“People are upset because their senior leaders let them down, and none of them are raising their hands and accepting accountability or saying, ‘We messed this up,’” he said.

"I have been fighting for 17 years. I am willing to throw it all away to say to my senior leaders, I demand accountability." – Marine Lt. Col. Stuart Scheller on the failures in Afghanistan that led to American servicemen dying. pic.twitter.com/JPH3nTctrG

“I’m not saying we’ve got to be in Afghanistan forever,” Scheller added, “but I am saying: Did any of you throw your rank on the table and say, ‘Hey, it’s a bad idea to evacuate Bagram Airfield, a strategic airbase, before we evacuate everyone’? Did anyone do that? And when you didn’t think to do that, did anyone raise their hand and say, ‘We completely messed this up?’”

The Marine Corps announced that Scheller had been relieved of his command on Friday.

UPDATE: Lt. Col. Stuart Scheller, who in a viral video called for accountability among senior leaders after the attack in Afghanistan, has announced on Facebook that he's been fired https://t.co/2dfBxc1upY pic.twitter.com/i83QFqqYm6

Will more and more members of the military begin to follow Scheller’s courageous example?

Terrorist administration is denying first amendment rights. ALL IN BIDEN ADMINISTRATION AND ANY TRAITORS WHO SUPPORT THEM ARE INTERNATIONAL TERRORISTS. ALL MUST SEE DEATH ROW. THE WOKE SHIT WHO ARE TRYING TO SILENCE THIS HERO HAVE NO RIGHT TO BREATHE.

Change Your Life Right Now! Work From Comfort Of Your Home And Receive Your First Paycheck Within A Week. No Experience Needed, No Boss Over iil Your Shoulder… Say Goodbye To Your Old Job! Limited Number Of Spots Open…
Find out how HERE…….

I totally agree. The top brass should all resign. Biden is incompetent and is a disgrace to our nation. The blood of the killed and wounded is one his hands!

Correction:
Top Brass should all be arrested and tried under UCMJ, Military Tribunal, Charged with Dereliction of Duty, with punishment such as the Military Tribunal so shall find.
Upon arrest, forfeiture of all rank, privileges, and retirement, bust them back to slick sleeve private while held for trial and conviction.

vladimir
Reply to  R. B. Blackstone

globalists and their puppet barry soetoro and his husband big MIKE appointed all the correct criminals to the correct positions to protect all their criminals .

Ann
Reply to  R. B. Blackstone

So true but remember they were follow orders from the President and he also should be held accountable.

Duh. Ya’ THINK?!
EVERYONE KNOWS that HIS has got to be the FIRST head to roll!

Pawn
Reply to  R. B. Blackstone

what i was saying (i just read but you beat me to it and made it simple and how right you are,,, trial and hang.

Got that right. Relief of duty for stating the facts which military leaders and the current administration refuse to do so. Shame on you. This man should be promoted!

Please send him to congress or the senate.

Lieutenant Colonel Scheller is a very brave and principled man. I would promote him if I were in charge. Principled people are in short supply in the senior levels of the military.

He knew —fell on the saber. What astonishes is the quickness to hold Scheller “accountable” for opening his mouth, but ignore the silence of Generals who should have or resigned in disgust.

Wherever Colonel Scheller is from he should run for Congress. We need more like him that tell the truth.

Our Brainwashed, Ignorant, DUMBSHIT population wouldn’t know enough to vote for him. We are in a Helluva situation in this formerly Great country.
NOW we have leaders like O-EVIL-a and Crooked Joe.
THAT’S Who this sorry ass populace now votes for.

A third of the sorry-ass voters are now CATHOLIC traitors. Vote for ANY CATHOLIC and you vote for a traitor.

Remember back when senior level officers were railing on Trump. Not a single officer lost their job in the Military.