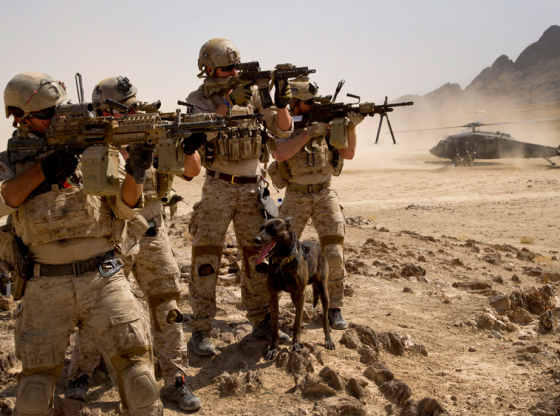 With Joe Biden’s attempted withdrawal from Afghanistan having already turned into a dangerous and tragic fiasco a group of special forces veterans were forced to embark on their own private mission, separate from the jurisdiction of the US government, to rescue comrades who would otherwise have been left behind by Biden.

A group of American war veterans in Kabul are secretly saving hundreds of Afghan Special Forces troops and their families who helped them in the war but have now been left for dead as the US withdraws from Afghanistan.

The group of special op soldiers includes retired Green Berets and SEAL Team commanders who launched the mission, which they are calling Pineapple Express, after one of the Afghan commandos they served with contacted them to say he was on the run from the Taliban. His visa had not been approved when the Taliban took over on August 14 and thousands ran for the airport.

After successfully getting hundreds through that way, the special ops teams started going into Kabul, behind enemy lines, to rescue more of their comrades and their families in the cover of darkness.

>an all-volunteer group of American veterans of the Afghan war launched a final daring mission on Wednesday night dubbed the "Pineapple Express"< https://t.co/zSDZ9Wyi41

Their astonishingly courageous efforts have saved hundreds while Biden and his team have bungled the evacuation mission by haphazardly telling some US citizens and allies to go to the airport while rejecting visas for others and leaving any Americans to fend for themselves. They are one of several ad-hoc volunteer groups on the ground that are frantically trying to save people before time runs out.

The incredible heroism of the veterans behind the ‘pineapple express’ is a ray of light in what has otherwise been an incredibly dark week for American servicemembers and veterans alike thanks to Joe Biden’s shockingly incompetent bungling of the Kabul evacuation.

God bless our patriotic and brave military — both vets and active duty. Too bad they have such poor leadership at the top!

They (Patriotic and Brave Military) would be more useful if they guarded our own shores, borders and citizens.

Peace only comes when the last enemy is killed and the morons hide in fear. We would have lost World War II, if we avoided civilian casualties. Villages that harbor terrorists should be completely destroyed as Doolittle destroyed Tokyo in World War II.
Is it more humane to kill just the men, and leave the women and children to starve?

Peace is a fragile commodity. What Americans need to realize is that our government is orchestrating conflicts around the globe, when they should be focusing their efforts on forging our National Sovereignty, Energy Independence, Border Security and Rebuilding our Infrastructure. America is blessed with every resource we need to sustain our population, including oil reserves, raw materials, technology, transportation and manufacturing facilities to produce staple products domestically. The more we allow our leaders to “Globalize” our jobs, economic system and military deployments, the more our streets will fill with homeless people, illegal aliens and unemployed workers. If you feel there is a need to deploy our forces overseas, then don some BDUs, grab a rifle and have at it. You’ll have every Globalist’s best wishes.

Oh come on man, YOU DID JOIN THE SWAMP!!! OUR COMMUNIST REGIMES IN POWER NOW AREN’T DOING ANYTHING GLOBALLY, YOU CAN’T BE THE SAME DAVE I USED TO READ!!! DON’T DROWN IN THE SWAMP!!!

I agree with the intent of your statement, but would like to remind you that it was Curtis Lemay’s air command that leveled most industrialized Japanese targets in WW2.
Col. Doolittle’s raid on Japan in 1942 was an effective morale booster, but certainly did not level any enemy cities.

They are trying to save our CITIZENS. Something your president is supposed to do: protect the citizens of the US.

Section 8 US Constitution l5 TO provide for calling forth the Militia to execute the Laws of the Union, suppress Insurrections and repel Invasions;
Biden CATHOLIC TRAITOR is Violating the Constitution of the USA. Section 15 says it is the responsibility of the Fed Govt to repel invasions. The ILLEGAL ALIEN CATHOLIC ARE INVADING. The Vatican takes no prisoners.. Be Catholic or be dead. Not only is he violating the Constitution, since he is one of the CATHOLIC traitors, he is also a TRAITOR. Vote for ANY CATHOLIC and you vote for a traitor. Vote for ANY CATHOLIC and the borders will never be secured.

Biden and Pelosi only CLAIM to be Catholics. They have been denied communion because of their advocacy for abortion and LGBT agenda. Anti Catholicism bigotry is the oldest bigotry in the USA. The KKK was anti Catholic, anti Jew, anti black and founded by Democrats. Democrats do not allow members to vote according to religious beliefs, they are socialists/ communists. Catholics provide hospitals, schools, shelters, soup kitchens, addiction help and make up a large portion of law enforcement and military. You do not know your history.

Yes, CORRECT!!! Protect the AMERICANS from the ILLEGAL ALINE CATHOLIC INVADERS. NO CATHOLIC is an AMERICAN. Vote accordingly.

That is a failure of biden and his ilk. The fact that the border is now wide open is on biden and the sycophants that hang around to kiss his ass.

They are guarding our shores. Corrupt politicians are preventing them, just like in Kabul

Hey Alfie: You have got to be one of the most “illiterate” persons, ever!! Hate to blow your prejudiced mind to bits but Catholics make up less than 20% of the population in US. Further, the majority of Congress is NON CATHOLIC. I think it might be a good idea for you to spend more time reading up about islam and the dangers that it poses to peace in the world. It sure as hell is not Catholicism.

God bless our troops for putting their selves at risk while our current President cowards down in his basement!

Oh great, so you bring them so called refugee’s to America where they get special privilege’s, special rights, and financial dole outs by the corporate fascist left that middle America and small business gets none of. What to destroy the country quicker? Thanks but no thanks. Middle class is disappearing and we were the first to say kick the crap out o the Taliban but NO NATION BUILDING that is causing our ruin with debt and overregulating from the same corporate fascist left.. Dear corporate Fascist pigs, open up you own absurd profits you made from us and take care of these people you let down. Stop fleecing the sons and daughters of decorated WII soldiers who destroyed fascists’ the first time. God Bless Ike, Reagan and Trump for being on the side of Americans.

Send back home those illegal aliens who entered this country by this demented fake president
who open wide the borders.!!!This fake president should be impeached or do the 25th amendment.!!! Ask him to resign like NY Gov. Cuomo.!!! Everyday he’s creating crisis after crisis.
The worst part his VP is ten times worst, Ms. cackling than him.!!! This is the consequence of
stolen election, America ended up with a useful idiot puppet.!!!Demonrats always giving embarrassment to the whole world & they causes too many problems in America.!!!

The Vietnamese refugees have been both conservative and productive, much more so the slackers who infest cities like Chicago, who were born here. These Afghanis have learned the horror of totalitarian government, and will be much more likely to vote against the party that surrendered their former country to terrorists. This will balance the welfare candidates being recruited by the evil Democrats.