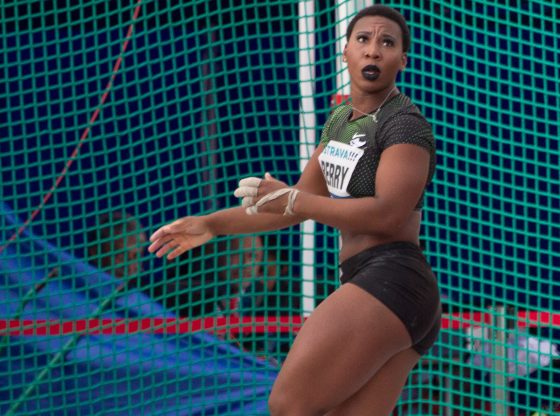 Gwen Berry, a Team USA hopeful, disgraced the American flag on Saturday during tryouts for the US Olympic Track and Field team.

After placing third in the Hammer throw event, thus qualifying her for a spot on the US Olympic team, Berry turned away from the American flag while the National Anthem was playing.

At the U.S. Olympic track and field trials on Saturday, hammer thrower Gwen Berry turned away from the American flag as the National Anthem played.

Berry placed third in the hammer throw on Saturday, qualifying her for the Tokyo Olympics. As the National Anthem began to play with the winners standing on the podium, Berry turned away from the flag so that she was facing the stands. Toward the end of the anthem, she pulled up a black t-shirt with the words “Activist Athlete” on the front to cover her head.

“I feel like it was setup,” Berry said with a burst of laughter. “I feel like they did that on purpose, and I was pissed, to be honest. I was thinking about what should I do. Eventually, I just stayed there and just swayed. I put my shirt over my head. It was real disrespectful. I know they did that on purpose, but it’ll be all right. I see what’s up.”

“It was funny because they said they were going to play it before we walked out,” Berry said according to The Washington Post. “It just happened they played it when we were out there. So, you know, it’s okay. I really don’t want to talk about the anthem because that’s not important. The anthem don’t speak for me. It never has.”

Is this just the tip of the iceberg of what Americans can expect from its Olympic team this year as it competes in Tokyo this summer? Let us know what you think in the comments below.

If it doesn’t speak for you then maybe you should go find a country that meets your needs because we don’t need you here!

She needs to find another country or be barred from the Olympics if thats the way she feels about her America. Other country’s people have more respect for their country then these infadels in America.

Reprehensible behavior. If the US disgusts you, go compete & live in another country.

She want do that because another country would not put up with her “BS”. A total disgrace.

Exactly! And she couldn’t get Welfare or Foodstamps!

There aren’t many “Help Wanted: Hammer Thrower” signs out here. Maybe she should consider her future with her brain, if possible. Maybe some day, if she thinks really hard, she may find that she is not the center of the universe.

This is a great virtue for those participating in the BLM protest! Maybe she can find employment there.

That won’t happen! She is a narccist! She believes the world revolves around her!

She should not be allowed to represent the United States. What an absolute disgrace! This is why I will not be watching the olympics and why I stopped watching professional sports years ago. Nothing but whiny, over-privileged trash who have never done anything important in their lives, just playing a game for money.

have you noticed it is almost always Black people who exhibit hate for this country,dispite the country bending over backward to give Blacks extra opportunity