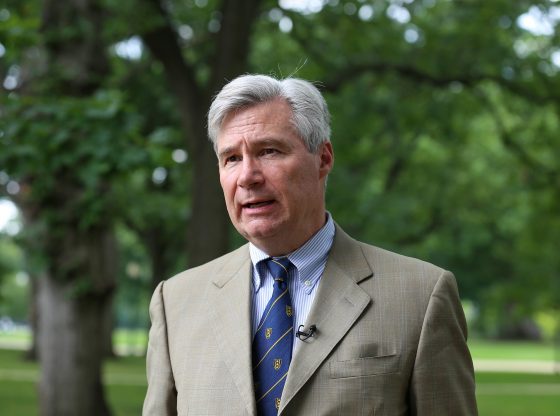 “I think the people who are running the place are still working on that and I’m sorry it hasn’t happened yet,” the progressive pol told the reporter after being asked of the club’s lack of any diversity whatsoever.

Asked if such clubs should continue to exist at a time when the country is having a racial reckoning, Whitehouse replied, “It’s a long tradition in Rhode Island, and there are many of them.

“And I think we just need to work our way through the issues,” he added before leaving the scene.

While Whitehouse appeared to dismiss the club’s circumstances, his wife, Sandra Whitehouse, is one of the three largest shareholders in the club.

Despite Whitehouse pledging to quit the club in 2006, he is still a member today. “I think it would be nice if they changed a little bit, but it’s not my position,” the left-wing senator said.

In June 2020, amid the George Floyd race riots, Whitehouse wrote on Twitter, “We can and must do better to root out systemic racism in its many forms and meet America’s full promise of justice for all.”

There is some other kind?

I don’t blame him. Why would you want to invite blm and antifa into your club?