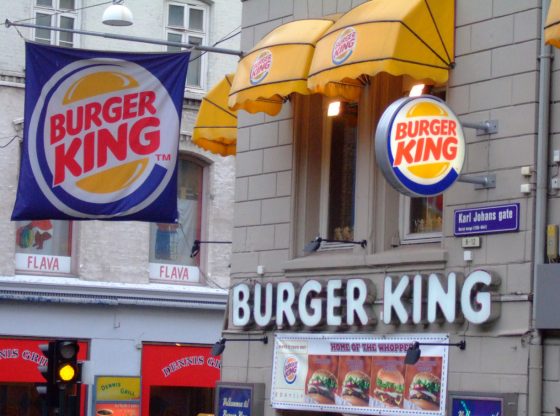 Burger King has now taken aim at rival Chick-Fil-A in a series of tweets implicitly criticizing it for its stance against ‘LGBT’ rights.


However, unlike previous capitalistic fanfare wars, this war is not just a measurement on which establishment has the better sandwich – this is for LGBTQ+ pride, USA Today reported.

On June 3, Burger King made a cheeky tweet saying it will donate up to $250,000 of the proceeds from its new premium chicken sandwich, Ch’King, to The Human Rights Campaign (HRC). For every hand-breaded chicken sold, 40 cents will go to the cause.

during #pride month (even on Sundays 👀) your chicken sandwich craving can do good! we are making a donation* to @HRC for every Ch'King sold 🏳️‍🌈

The company emphasized that the Ch’King is available on Sunday, taking a jab at Chick-fil-A which observes the Sabbath on Sunday.

Chick-fil-A is a fast food eatery known for its chicken-based meals. Before 2012, the restaurant regularly donated to anti-LGBTQ+ groups, and its CEO Dan Cathy said supporting same-sex marriage would invite God’s judgment on the country.

Are Americans ready for a new culture war fought on behalf of ‘LGBT’ rights and sponsored by corporate giants? Let us know what you think in the comments below.

Don’t be sorry to boycott BK. Their product has become miserable in recent years anyway.

m b
Reply to  porterv

Colleen B.
Reply to  m b

AIDS attacks heterosexuals too. It is not a gay disease. Grow up.

Peter Nyikos
Reply to  Colleen B.

Sharon
Reply to  m b

Nowhere near the burger(s) they used to put out…

I’m in. I used to say that I wore Burger King underwear. Home of the whopper. But I’ll retire that joke now

I wonder if there are “Quarter Pounder” jokes?

Look at the ingredients of the so called awesome whopper, what it does to men & realize that Bill gates is attached to it, not sorry! BK sucks!!!

They need to Stick to making good sandwich’s and quit pontificating.

In order to “stick to” making anything good I believe they would need to shut down and reopen with a new business model…and what the hell is up with the plastic faced king? If these idiots are shooting for racial equality by removing an actual person’s face…they screwed that up too…he’s still a WHITE KING…idiots

I’m not sure why we have to have this rainbow crap shoved down our throats, and not just for an entire month each year but every day all year long. If you are gay, lesbian yadda yadda yadda, so be it. Go live your lives the way you see fit and be happy if that’s what you like. We don’t need to have it front and center of all the media, all the time. I’m sure if there was a heterosexual pride month there’d be a deafening roar of outrage from the libretards on a scale that would bust your ear drums!

I agree. It seems that every show on television HAS to have some gay character that plays a major role. Think Chicago Med, Fire, New Amsterdam, 911, the list goes on. Do your thing but don’t go pushing your agenda in my face.

William, their thing is to push their agenda in our faces.

Homosexuality is just one of the ways the adversary gets people to follow him. When people do what the adversary wants them to do, he considers them his followers whether they do it by coercion, by deception, or by choice. It makes no difference to the adversary because all he cares about is that people do not follow the one, true God.

Hallmark has caved in as well.

I gave up Hallmark since last year. I watch the UP channel. Similar movies and much better productions.

Why I don’t watch them.

The gays and perverts have “stolen” the Rainbow from God Himself. It was the token of a promise that He would never again destroy the entire earth with a flood. Here’s a rhetorical question from the Bible, “Will a man rob God”?

Or a white history month.

I agree with you

Maybe someone should start a heterosexual pride month!!