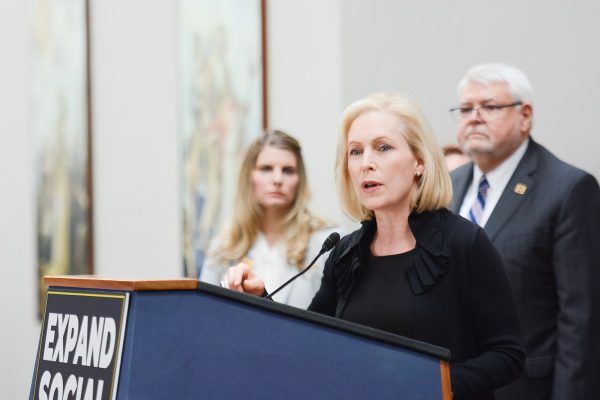 Senator Kristen Gillibrand (D-NY) sent out a shocking tweet on Monday which seemed to very clearly call for the abolition of the American family.

The tweet is written in a popular ‘meme’ format meant to juxtapose two options the ‘tired’ one being viewed as undesirable or outmoded and the ‘wired’ one being desirable.


The subtext couldn’t be more clear, Gillibrand seems to believe that the traditional family consisting of a mother, father, and children is outmoded and should be replaced by child care subsidies that incentivize single motherhood and ‘alternative’ families.

A truly shocking, albeit not entirely surprising, turn of events for an increasingly radical Democrat party.

BARR: The Answer to ‘Police Shootings’ is Not To Be Found In Police Shootings
House GOP Rips Biden Over Scheme to Bribe Central American Countries Into not Sending Migrants

This is what a gunshot to the head will do to you. Or, just being a Demonrat! Both scenarios are about the same!

The proof is in the pudding! These radical haters of our USA, and of God, they have come out of their atheist communist closet as they are not ashamed of being flaming communists because they no longer fear that “we the people” will vote them out of office. Voter fraud is rampant and we don’t even have the guts to stand up to them or even TRY to vote them out. So, they KNOW that they can destroy our country, our home, our family, and their loyal voters, who are loyal to the party, not to the nation, will believe any lie that they are spoon fed and told to believe, and they can do anything that they want to us and we are the ones who will face the punishments.

What a sad, sad, sad shape our country is in when these treasonous traitors make themselves above and exempt from our laws that they hold our feet to the fire to obey. They can destroy us and our family, they can destroy our lives, take what we worked hard for, and destroy and commit treason after treason with impunity. The devil is alive and well inside the democrat party mafia and their mobs, and he’s doing what he does best.

Dear God, help us, even when we refuse to help ourselves.

Webster’s dictionary defines ‘morality” as conduct that conforms to an accepted standard of right and wrong. Once the Bible defined our standards but now man defines them. Anal sex is a most excellent expression of man’s standards. More than one gender (another standard of men) which defines a gender unknown in history or just two men wearing nail polish and bright red lip stick, 9-inch heels and swishy skirts revealing shaved legs whose voices resonate like the serpent (the real name of the first tuba which is twisted thus the name serpent) which is a bass wind instrument that is a distant ancestor of the modern tuba….lipstick and tuba voices produce a jolting effect impossible to remove from your memory.

Lawlessness in every aspect of human conduct is on display like never before…from mandated government control of basic human rights to the global concepts of a command center determining the activities of all humanity, a new world order with its own currency (digital money), its own rule of law (no more nation states with individual rights) and its unrestrained access to every aspect of your life from your place of residence, your employment, your sustenance and all other activities which are going to be under the control of a global government, coming soon. Read Matthew 24 and hear what the LORD told HIS disciples what the year 2021 would be like and learn a lesson from the FIG TREE ISRAEL (Hosea 9:10)….on May 14, 1948 the FIG TREE came back to life and the clock began the countdown….before the 1948 Generation passes THE LORD WILL RETURN….Matthew 24:30 And then shall appear the sign of the Son of man in heaven: and then shall all the tribes of the earth mourn, and they shall see the Son of man coming in the clouds of heaven with power and great glory. Matthew 24:34 Verily I say unto you, This generation shall not pass, till all these things be fulfilled.

There is only one way out of this and one way only.

“The tree of liberty must be refreshed from time to time with the blood of patriots and tyrants.” Thomas Jefferson

No truer words were ever spoken.

The shooter was a warning to all that do not tow the party line.

are you sure they ever had any minds to begin with

I know that they are incompetent and unfit to rule over me, my family, and my country.

No, they are simply devoted to the service of their master, Satan. They are all Luciferians, and Mizz Gillibrand is eyeball deep into sex trafficking of women and girls via the NXIUM cult. It will be a good day for all of Christ’s Flock when Kristen stands in Judgement before the Lord.

In the meantime, can we start executing them?

Well, as the saying goes, “Some people are alive only because it is illegal to kill them.”

It depends. People all over the world have been legal to kil.

You have NO idea how evil this witch with a b is! She has targeted me for almost 15 years now! I have no privacy thanks to her but it is much much worse than that -so much worse!

The devil is alive and well inside the communist demonRAT party mafia.