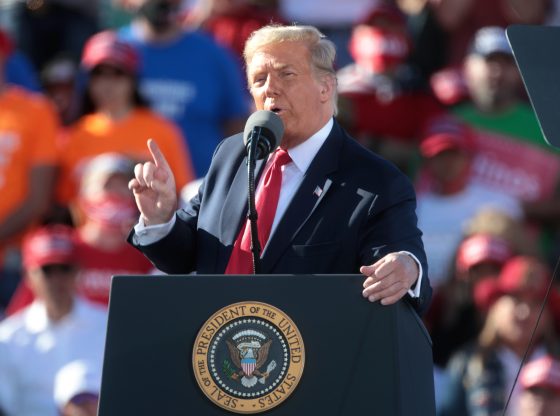 President Trump broke his silence on Saturday by calling for a general boycott of Major League Baseball after the league decided to move its coveted All-Star Game out of Atlanta, Georgia due to the state passing a new law to combat vote fraud.

The MLB commissioner Rob Manfred explained his decision by releasing a statement that claimed ‘the best way to demonstrate our values as a sport.’

Former President Trump called for a boycott of Major League Baseball after it decided to move its All-Star Game out of Georgia in protest of the state’s new bill signed into law that tightens voting restrictions.

“Baseball is already losing tremendous numbers of fans, and now they leave Atlanta with their All-Star Game because they are afraid of the Radical Left Democrats who do not want voter I.D., which is desperately needed, to have anything to do with our elections,” Trump said in a statement released by Save America PAC.

“Boycott baseball and all of the woke companies that are interfering with Free and Fair Elections. Are you listening Coke, Delta, and all!” he added, referencing other companies that have criticized the new law…

Trump in particular has claimed repeatedly that Georgia experienced widespread voter fraud after Biden won the state by just over 11,000 votes. His loss there marked the first time since 1992 that a Republican presidential contender lost Georgia.

Will the MLB end up regretting its partisan decision to support a Democrat talking point in Georgia? Let us know what you think in the comments below.

Corporations should not take part in Political Activism .

When the power of the government and power of corporations unite, it will and is taking this country into a spiral on a path we will all regret

Fight back. Michael Jordan once said to Nike, Republicans buy shoes, too! I haven’t bought anything that has the Swoosh and I threw out Nike T-shirts I already had!!! Then don’t be afraid to tell your “Lefty” friends how you feel about Biden. Didn’t you have to listen to all their vile speeches about Trump?

Yeah, because Chump is a vile human being Num-Nuts!!!

You are endorsing the Cancel Cluture?

Like you Carol, a couple years ago just made sure we didn’t buy the Nike stuff. Will do the same with a new list of woke companies. Thanks for your comments!

@Carol & Neighbor, I’m with you and fully agree.
Unfortunately, I don’t think people are willing or committed to push back. Then they complain.
Boggles the mind!

they have no guts!

Speaking of guts, Nob, did you have the guts to smear your fecal matter in the Capitol?

Who gives a rats ass what ya’ll watch! Republicans not watching major sports don’t affect majors sports in the least. Most people Republicans or Democrats gonna watch major sports regardless what Chump or other politicians might say!

Same here Brother, there are plenty of others doing same. Don’t buy there stuff or their stock either.

Absolutely. I’ve been a lifelong fan of football. But, once players started “taking the knee” during our national anthem, I lost all interest in the game. It looks like baseball is going down the same whirlpool of destruction. So sad for all the ancillary services that depend on the sport for livelihood. When will these Woke people WAKE UP?

So you lost interest? The major sports world will go on without you for SURE! After ALL of Chump’s BS about kneeling during the national anthem! Colin Kaepernick was NEVER disrespecting our troops or the flag. All of that was proved to be yet ANOTHER BIG LIE from Chump. Kaepernick was proven RIGHT! He had the RIGHT to Peacefully Protest the injustices going on in this nation toward people of color by law enforcement. He took a knee to protest Police Brutality. YEARS before George Floyd’s eventual death when that WOKE Deranged Cop “TOOK A KNEE” not to protest but on a human being’s neck and murdered him in broad daylight with camera’s rolling from every angle. Woke people like YOU need to WAKE UP. Now READ IT and WEEP!!!

you need a picture ID to cash a check, board a plan, even get “food stamps” card, is voting less important?!?

well no baseball games for this family sports has nothing to do with politics, we watch baseball to get away from politics. they don’t mix so I guess mlb lost some revenue from me. BYE

Good bye! Most major corporations agree with MLB and most of Americans that did NOT vote for Chump. We will NOT stand back and let some states like Georgia make new laws to disenfranchise black voters rights, no matter how many of you stop watching major sports!

Stupid comment. There is no disenfranchising anyone. Get an ID to identify yourself and then go vote. What are you afraid of? Prove you are registered and who you say you are. Simple as that. Try cashing a check without ID. Try getting on a plane or ship without ID. All voters should have ID to prove who they are and if they are registered. Easy to do. And it’s common sense.

Same laws in FL and nothing negative for 20 years since reform, all races enjoy fair voting and ID, mail in ,etc. Just know who is voting and much harder to cheat. All this noise is a set up for HR 1 which is the radical left end game to make voting controlled by Fed, just a grab for power and doesn’t help anyone except them